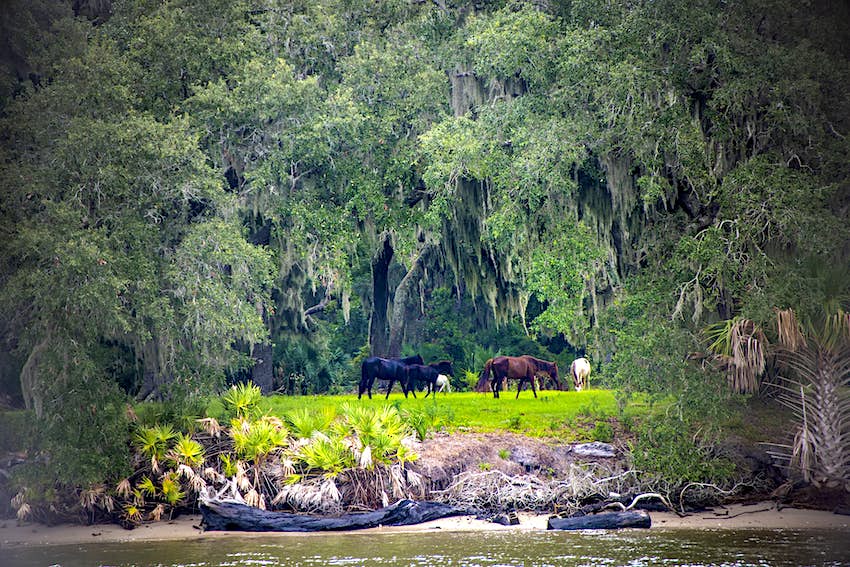 Looking to escape the mainland crowds with your tent? Island camping destinations across the US can often provide a more remote experience – along with pristine beaches to stroll, sea caves to kayak into and all manner of local island-dwelling wildlife (from elephant seals and bald eagles to black bears) to discover.

Read on for some of the best island camping spots across the US – from California’s rugged Channel Islands and Wisconsin’s stunning Apostle Islands to coastal barrier islands home to wild horses and historic ruins you might have missed along the East Coast, too.

Jekyll Island, Georgia: Best for campers who like to bike

Islands and beaches may not be the first thing most people think of when they think of Georgia. But one of the best places in the US for island-style camping is found on this inimitable barrier island that’s entirely state park. Jekyll Island lies off the southern reaches of the state’s 110 miles of coastline and can be reached by car.  You’ll want to bring your bike, too (or rent one once you get here) since cycling is the best way to enjoy the roughly 25 miles of paved trails that circle the island. Jekyll’s golden beaches are so wide at low tide, too, that you can bike right atop them for miles as well. Jekyll Island Campground has tent and RV sites spread across 18 acres shaded by a dense canopy of oak trees. The island’s most beautiful beach, Driftwood Beach, carpeted with logs and big craggy limbs the tide washes in, is just a ten-minute stroll away.

Expert tip: Driftwood Beach steals the Instagram spotlight here. But for a less-crowded stretch of sand make your way to Jekyll Island’s southernmost stretches and the lonelier beaches at St. Andrews Beach Park.

Trying to snag a waterfront campsite at a state or national park in Florida during the cooler months of the year is no easy feat. But boaters know that some of the best islands for camping don’t even require a reservation. Located within the Indian River Lagoon, one of North America’s most biodiverse estuaries that runs along 40 percent of Florida’s east coast, the Spoil Islands offer an away-from-it-all camping experience to anyone with a boat to access them.

Here, surrounded by native palms and mangroves, you can camp on the sandy islands designated for recreational use (some of the Spoil Islands are protected)–for free! Some of the prettiest among them are a short cruise from the riverfront city of Fort Pierce, on Florida’s east coast, where Captain Mike Dedrick of Happy Pineapple Boat Tours leads both day trips and overnight camping adventures to sleep on secluded isles.

The product of channel dredging in the Intracoastal Waterway, the Spoil Islands hardly look manmade since they’ve been reclaimed by native grasses and mangroves over the decades. On clear nights, look for shooting stars streaking the inky sky overhead. Frequent manatee and dolphin sights are par for the course in these parts, too.

Expert Tip: Stock up on fresh Florida citrus and other produce before heading out to camp at the Downtown Fort Pierce Farmers Market, held every Saturday morning and considered one of the best in the state.

Get more travel inspiration, tips and exclusive offers sent straight to your inbox with our weekly newsletter.

Reaching this other fabulous barrier island for camping along Georgia’s southernmost coast requires hopping a passenger ferry 45 minutes from St. Marys (or arriving by private boat). But it’s worth the effort to get to Cumberland Island if you’re looking for beachfront and wilderness campsites with no RV camping – not to mention far fewer crowds than Jekyll Island, which lies just north.

You’ll need to pack your own food, as there are no restaurants or shops on Cumberland Island. There are also no paved roads, but plenty of sandy trails to pedal a fat bike along (bring your own on the ferry for a small surcharge, as you can’t rent bikes on the island).

The island’s nearly 10,000 acres of congressionally designated wilderness span coastal maritime forests, towering dunes, marshes and freshwater lakes. And the five island campgrounds include three wilderness ones that you’ll need to hike or bike into with no amenities as well as two campgrounds with amenities (flush toilets, fire rings and the like) that are closer to the ferry dock. Don’t miss a visit to the Dungeness Ruins here–the incredible remains of a 19th century mansion that served as a winter residence for members of the Carnegie family that you can walk through to explore.

Expert tip: Unless you’re staying at Sea Camp Campground, closest to the ferry dock, don’t even consider bringing a wheeled cooler as you won’t be able to drag it to your campsite. Opt for a backpack-style cooler, instead. 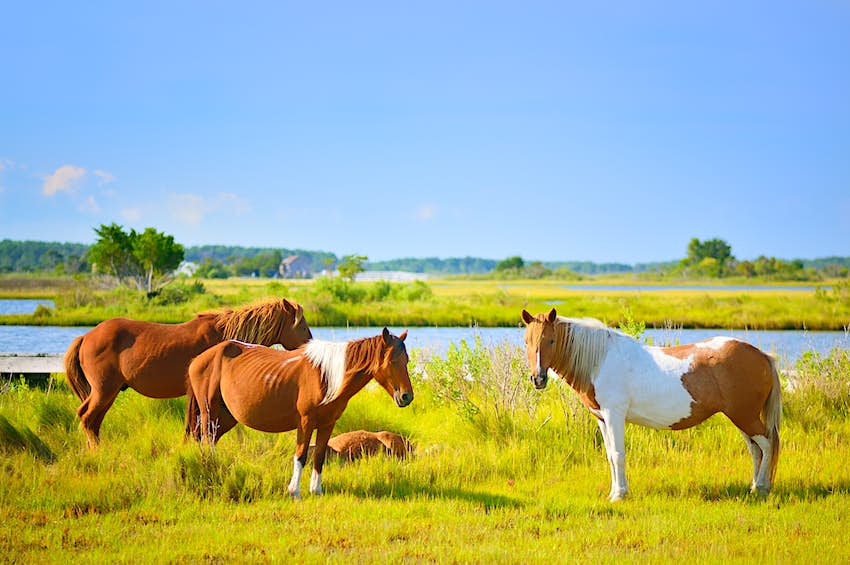 While the sublime east coast barrier island of Assateague Island reaches into both Maryland and Virginia, you can only camp on the Maryland side, where bayside and oceanside campsites within the national park (as well as backcountry wilderness sites) welcome visitors year-round.

Assateague Island is famous for the wild horses that roam in herds on either side of the state line. And you might see non-native Sika deer here, too – a species from Asia introduced to the island in the 1920s. Birders descend during the fall months to scout for some 300 species of migrating waterfowl that pass through on routes south along the Atlantic Flyway.

Expert tip: Invest in a few extra-long tent stakes if you’re camping on the oceanside here, as they’ll help your tent stay firmly in situ when the Atlantic Ocean breezes start cranking.

South Carolina beyond the beaches

In addition to the five spectacular miles of undeveloped coastline and miles more of hiking trails through maritime forests, the island is home to a historic lighthouse originally built during the Civil War, Lowcountry marshlands and a fishing pier. The beachside campsites can accommodate RVs, too.

Expert tip: A single cabin for rent near Hunting Island’s lighthouse is worth reserving well in advance. It has a huge screened porch that can help you avoid the campground’s summertime mosquitoes and sleeps six people. 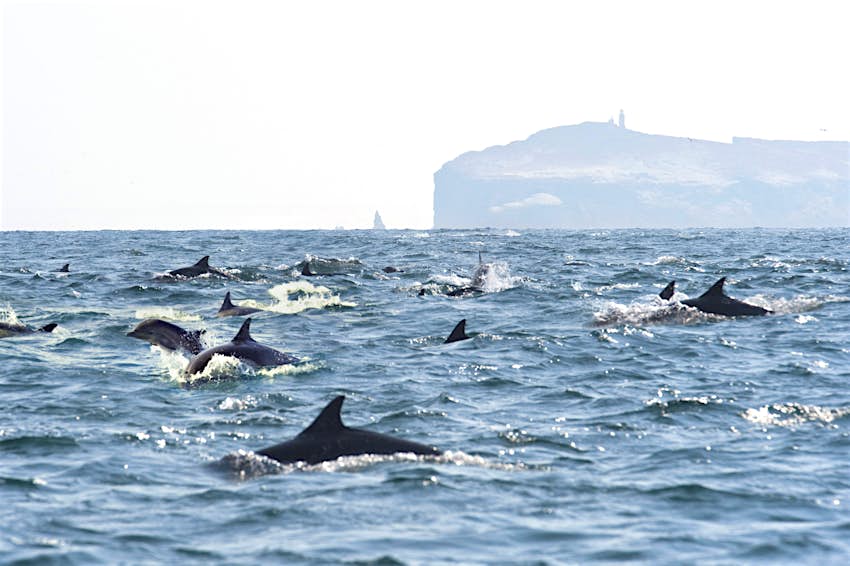 Camp in the realm of elephant seals, dolphins and passing humpback whales (whale season runs from mid-May to mid-September, but anytime is fair game to see them) on the remote islands of California’s Channel Islands National Park, accessible by ferry from Ventura in Santa Barbara County. Some 24 miles long, Santa Cruz is the largest in the eight-island archipelago (as well as California’s largest island) and among the quickest of the Channel Islands to reach, via an hour-long ferry ride from Ventura harbor.

Be sure to bring all the food – and quite possibly water – you’ll need, as fresh water is only available on two campgrounds on Santa Cruz and Santa Rosa Islands. Once out in these wilds, incredible hiking along the Pacific Ocean cliffs, bird watching among colonies of nesting seabirds and sea kayaking in sublime surrounds (you’ll have to BYO that, too) and incredible stargazing await – the skies over the Channel Islands are among the darkest of all the national parks.

Expert tip: Wily foxes and ravens will try to run off with any of your belongings that aren’t tethered down – gather rocks from around your campsite to put them atop anything you don’t want to disappear. 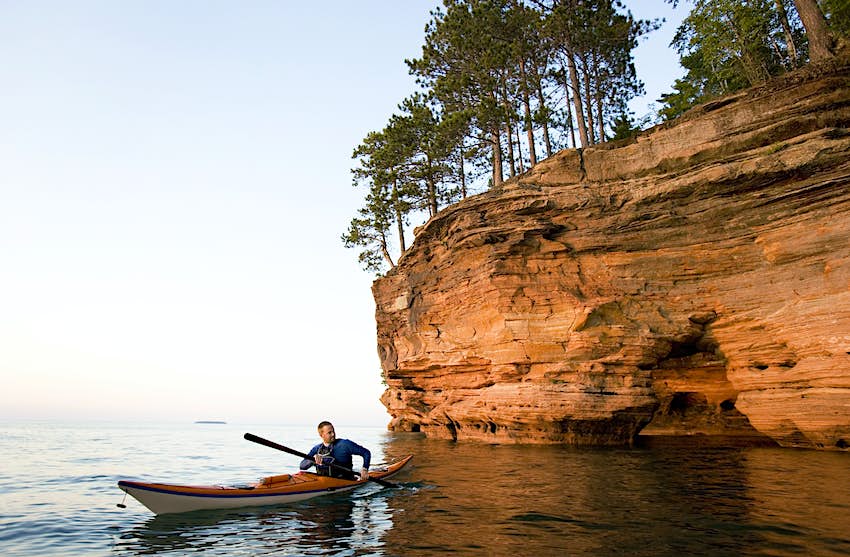 You can pack your tent to camp and paddle off in a sea kayak with all your gear to camp at most of the 21 islands within Apostle Islands National Lakeshore, a natural paradise in the northern reaches of Wisconsin that juts out into Lake Superior.

Islands lined with red cliffs and sea caves are home to such diverse species as bald eagles and black bears. In fact, one of the largest concentrations of black bears in all of North America is found here on Stockton Island, where you’ll definitely want to store all the food you brought along within the food locker to keep prying paws out.

Most of the islands can only be reached by sea kayaks and other boats, including shuttle services. And if you don’t feel comfortable DIYing your camping adventure, outfitters like Lost Creek Adventures can you lead you on guided kayak camping trips.

Expert tip: Ditch your kayak and campsite for a spell to hike through hardwood forests along the gorgeous Lakeshore Trail, which winds for more than four miles above the sea caves, with incredible Lake Superior views along the way.

The best of Fort Myers, Florida

Definitely a trip to save for the mostly mosquito-free, cooler months of winter and early spring (December through April is best), the Ten Thousand Islands National Wildlife Refuge in southwest Florida offers incredible primitive camping on remote sandy islands in the Gulf of Mexico. Here, in environments that protect North America’s largest mangroves forests, you’re just as likely to happen upon a midden of shells left behind on an island by the Calusa Indians who once inhabited the area as you are to encounter resident manatees and dolphins still abundant here today.

Experienced paddlers who can read a map venture out into the Ten Thousand Islands to camp on their own. But Everglades Area Tours can also bring you out on guided multi-night camping adventures from Chokoloskee Island through the mangrove maze to outer islands, where all the food and drinks are provided and syrupy sunsets are standard.

Expert tip: Reward yourself after a great adventure with a feast of sustainable stone crab claws in Everglades City at waterfront local haunt, Camellia Street Grill. Stone crab season runs from Oct. 15 to May 1, which overlaps nicely with the best time of year to camp in this part of Florida, too. 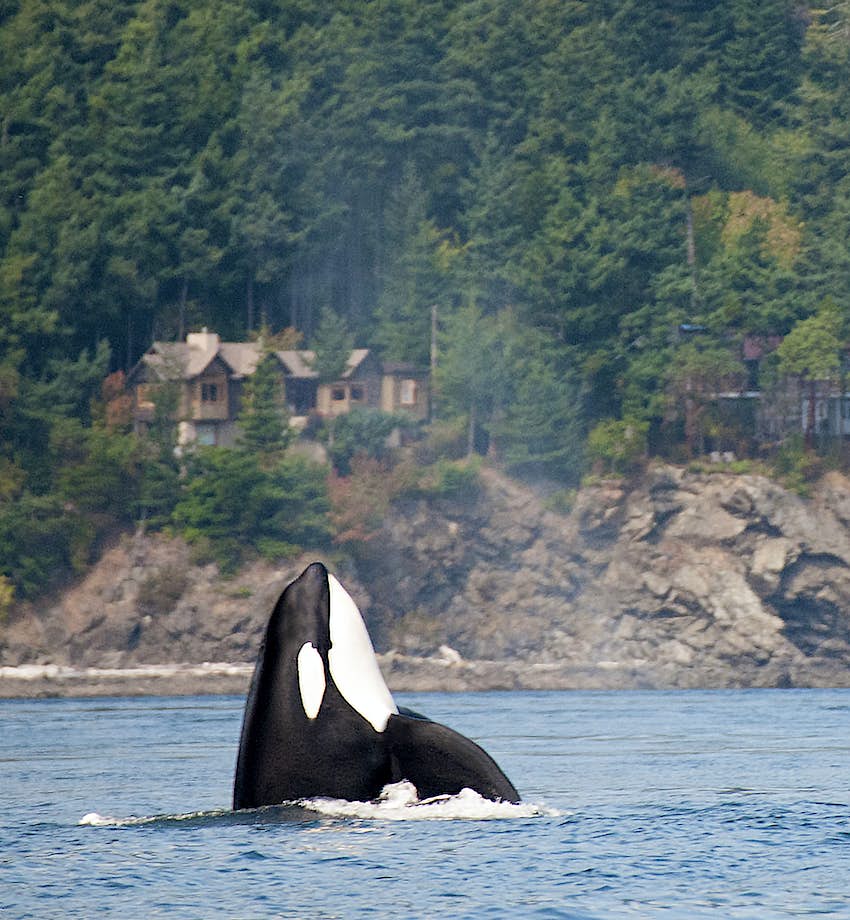 With RV and tent campsites as well as glamping available at several locations, Orcas Islands – the largest of Washington State’s legendary San Juan Islands, an hour-long ferry ride from the mainland – dishes up an affordable camping vacation surrounded by iconic Pacific Northwest scenery. Just make sure you pack your rain gear if you’re attempting to camp here anytime outside of the short, dry summer season, as wind and rain rattling your tent is far from uncommon.

Moran State Park offers glamping on raised platforms as well as standard tent and RV campsites, with easy access to five freshwater lakes for swimming, mountain biking trails and more. And West Beach Resort, on the northwest side of Orcas Island, has canvas tents already set up for campers–all with private decks with ocean views, picnic tables and fire pits.

Expert tip: March through October is prime whale-watching season in the San Juan Islands when you might even see passing orcas and humpbacks from the shore.

Madeline Island, Wisconsin: Best for outdoors-loving families who only want to rough it a little

During Wisconsin’s fleeting but fabulous summers, spending as much time outside as possible is the thing to do. And for a less remote camping experience than the Apostle Islands National Lakeshore, set your sights just south of there and hop the car ferry to Lake Superior’s Madeline Island, the largest of the Apostle Islands, where you camp at Big Bay State Park or Big Bay Town Park.

Families who like to rough it with some amenities in the mix enjoy that you can mix kayaking and hiking with listening to live music at one of several island bars and restaurants, gallery hopping or visiting a summer farmers market – then head back to the campsite to gaze up at the star-filled skies.

Expert tip: Open seasonally for the summer months only, Tom’s Burned Down Cafe in the island’s main population center – La Pointe (pop. 302) – is the favorite local watering hole for cold beers and sunset.

Valley Information – From the Trails: Youths want that outside connection