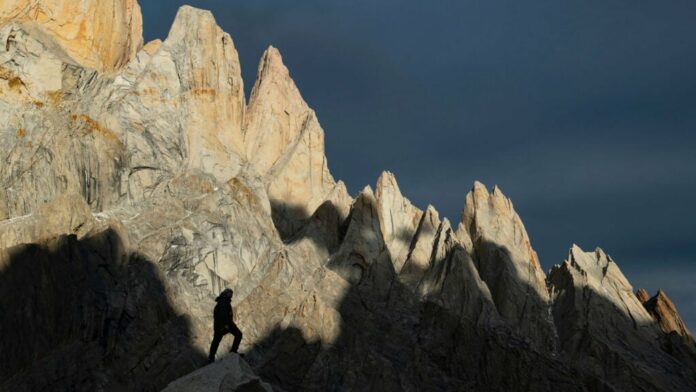 Alpinism’s highest honor, the Piolets d’Or, recently revealed the two ascents that won high honors for 2022: the ascent of Saraghar Northwest in Pakistan, and the climb of Moonwalk Traverse in Patagonia.

The award group also gave a special Jury Award to a Ukrainian team’s ascent of 24,780-foot Annapurna III in Nepal. This year the Piolets d’Or jury was comprised of six veteran alpinists: Conrad Anker, Alex Bluemel, Genki Narumi, Paul Ramsden, Patrick Wagnon, and Mikel Zabalza. The group will distribute the actual golden axe awards at a ceremony in Briançon, France, from November 18–20. At that event, Slovenian alpinist Silvo Karo is slated to receive the prestigious Lifetime Achievement Award, which celebrates his decades-long career putting up new routes in Patagonia and the Himalaya, and making significant repeats across the globe.

Here’s more information on the two climbs that won, and the special Jury Award recipient:

From September 3–10, 2021, climbers Archil Badriashvili, Baqar Gelashvili, and Giorgi Tepnadze of Georgia climbed the northwest face of Saraghrar Northwest, an imposing massif that straddles the Pakistan-Afghanistan border, to record the mountain’s first ascent. They called their route the Northwest Face. Like any route of this magnitude, located in such a seldom-visited part of the world, mere numbers do little to describe the week-long ascent.

This new route is best understood through a fantastic first-person account by Badriashvili in the 2022 American Alpine Journal (available online here), in which he writes of climbing in a “natural, ecological style, with a small circle of friends, dishing out a powerful test of our capabilities.” The trio had many unanswered questions before they arrived at basecamp, including rock quality and what the face even looked like. Badriashvili muses in his article: “Steep faces, isolation, undescribed areas, and neither an easy way up nor down—it felt almost like going to our home mountains in Georgia!” On their first day on the northwest face, the team traced a 4,000-foot snow and ice couloir up to 20,000 feet elevation. For the next seven days they tackled the wall’s steep, sometimes overhanging, granite face, pitch after pitch of hard mixed and aid that could take up to seven hours to lead. Sometimes, after a full day’s effort, the team established their camp a mere 500 feet higher than the night before.

In a press release about the ascent, the Piolets d’Or jury said, “[We] felt the choice of a high, unclimbed peak in a less well-known area, a conventional fair-means approach, a previous unattempted face, a small team, a long climb in pure alpine style with significant technical difficulties above 20,000 feet and a crux section between 22,000 feet and 23,000 feet and the need for a high level of commitment, all exemplify the Piolets d’Or Charter.”

Perhaps equally as badass, but for completely different reasons, was Belgian Sean Villanueva O’Driscoll’s solo traverse of the Cerro Chaltén Group (Fitz Roy) in February 2021. The ongoing Covid-related travel restrictions had turned the bustling region of El Chaltén into its former self—a place of few tourists and deserted summits—and O’Driscoll had been happily “stuck” there since March 2020. “If I really wanted to, I could have made it back to Europe… but all of that seemed like a lot more hassle than it was worth!” he told Michael Levy following the Traverse. “Things in Europe were bad, and I was in one of the most beautiful places on the planet! I felt like a kid locked up in a giant playground.” With his mainstay partners actually stuck in Europe, “at some point during the long winter nights,” O’Driscoll began to imagine traversing the Chaltén skyline alone.

The south-to-north Moonwalk Traverse is over three miles long with 13,000-plus feet of elevation gain, and ticks ten summits in total. Patagonia-climbing fanatics and Reel Rock viewers alike will remember Alex Honnold and Tommy Caldwell’s 2014 first ascent of the north-to-south Fitz Traverse, where they ticked eight summits total, but weaved around a few satellite ones. (O’Driscoll said these smaller summits don’t really complicate the traverse, “but since I was there I thought I might as well enjoy some extra rock climbing.”)

O’Driscoll rope soloed the vast majority of the traverse, with difficulties up to 5.11b, over the course of five days. Though he core shot his rope in three sections on the first day, and dropped several cams shortly after, O’Driscoll said there were no moments when he began to despair. In fact, when asked if there was ever a moment when he just wanted to be off the climb, he replied, “No, I would have kept going if there was more.”

The Jury felt that O’Driscoll’s route “was an elegant and sustained line, which had been attempted or conceived by several parties, although no one appears to have considered it for a solo outing—an adventure unattainable for most climbers. Whilst, apart from a few pitches, none of the terrain was new, the style was outstanding, combining technical climbing, endurance, mental commitment, and considerable Patagonia experience.”

The long-awaited first ascent of Annapurna III’s southeast ridge was about as epic as anyone thought it would be. It took two-and-a-half weeks by some of the high-altitude world’s best—Ukrainians Nikita Balabanov, Mikhail Fomin, and Viacheslav Polezhaiko—who told Federico Bernardi: “The psychological aspect was really intensive, as every day we faced some new obstacles and didn’t understand until the end if we would be able to climb it or not.”

The route, called Patience, had steep, crumbling chimneys, hard aid, and a psychological crux of “prolonged and creative” ridge climbing and snow shoveling. The trio worked efficiently, however, and after 16 days on the Southeast Ridge they reached the summit. “The descent is another story,” Balabanov said. “At first we planned to go down by way of ascent. But we realized it would be too dangerous … and decided to go down the Manang side. But to get to these gentle snow slopes you must traverse three-and-a-half kilometers (2.1 miles) of ridge at 7,300 meters (24,000 feet), which was impossible under 100-kilometer winds (60mph), so we started our descent on the west side, which we hadn’t planned before. We rappelled and downclimbed for two days without any topos or even photos of this side of Annapurna.” The climbers descended to 16,000 feet before calling for a helicopter pickup to bring them to the opposite side of the mountain. As the Piolets d’Or press release notes, “The Jury agrees that from a climbing perspective the new route on Annapurna III is one of the major ascents in recent years. However, it also agrees that it does not comply with all aspects of the Charter.” These aspects, of course, relate to helicopter usage—both getting to and from the mountain. Like three expeditions before them, the Ukranians chose to helicopter into the Sabche cirque at the base of the southeast ridge due to unstable (and landslide prone) approach terrain.

In its press release, the jury cites the Piolets’ Charter—“style and means of ascent take precedence over reaching the objective itself”—and notes that “those who visit the high mountains see, more than most, the huge toll that global warming is extracting on the environment. … It is incumbent on us as mountaineers to act responsibly and limit our impact. The Piolets d’Or would like to send a clear message that the high mountains and the people who live beneath are being increasingly damaged by climate change. It therefore does not support the use of the helicopter for general access.”

The Lifetime Achievement Award was first given to Walter Bonatti in 2009 to acknowledge the impact his career had on the following generations of young alpinists. Since then, legendary climbers including Catherine Destivelle, Jeff Lowe, and Reinhold Messner have received the award.

Silvo Karo’s career highlights include new routes on Cerro Torre, Torre Egger, Cerro Chaltén, and in the Himalaya; A5 on El Cap (Wyoming Sheep Ranch); the first one-day ascent of Eternal Flame on Trango Tower; and countless new and serious routes in his native Julian and Kamnik Alps. In a press release, friend and climbing partner Rolando Garibotti writes: “When I met Silvo he was in his prime—70kg of motivation and decisiveness, little talk and all action. Over the ensuing years we managed to share a rope on a good number of occasions, in Yosemite, Patagonia, and elsewhere. Climbing with him felt like cheating. Condensed in one man were all the skills one could possibly need in the mountains, from a rope-gun to lead the hardest pitch, to an army of porters for heavy loads, to an entire rescue team if something was to happen. He had the energy of a train, and there was something distinctly reassuring about the way he pounded pitons: the rock would ask for forgiveness. No matter the conditions, when faced with an objective he cared about, his determination was unwavering. Here was an honest, no-nonsense man, for whom I have always had enormous respect. Some of his climbs are the stuff of legend and have inspired climbers the world over. He has left an indelible mark on the sport.”

You Want a Higher Canine Barrier

Hear me out: Deliver again tenting out for live performance tickets

“The motion that started in 1972, stands at a important juncture...