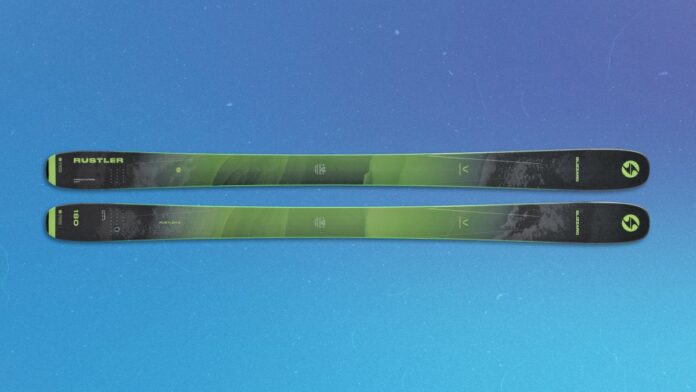 Powerful, damp, and snappy were the words used most in our testers’ feedback forms to describe the Blizzard Rustler 9. Tester Brady Newton spoke to the Rustler 9’s confidence-inspiring edge hold. “Once I set that edge, it was locked in for the duration of the turn and I knew I could trust it going forward,” he said. Its trustworthiness and dependability on edge is nice, but testers agreed that the real joy of this ski comes from when you unleash the energy at the exit of one turn and let the ski pop you into your next turn. The balance of energetic release and damp smoothness in all terrain and snow conditions explains why the Rustler 9 ranked second in the Versatility, Responsiveness, and Carving categories.

This balanced performance is largely due to Blizzard’s Carbon Flipcore D.R.T. (Dynamic Release Technology) construction which increases the ski’s strength and stability underfoot while keeping weight low. The stability underfoot opens the door for intermediate skiers to start exploring the mountain with confidence in all conditions, and truly lets the ski shine when more aggressive skiers push the speed limit. “This is honestly the type of all-mountain ski that most intermediate/advanced skiers should be on,” said tester Adam Jaber, an Eastern skier with a more playful skiing style. “It doesn’t punish you if you get sloppy.”

Related: See How the Blizzard Rustler 9 Compares to Its Competition

It may not be as punishing as some of the other heavy-hitters in this category, but it’s still a powerhouse. Tester David Amirault called the Rustler 9 a, “directional groomer missile,” and noted the best way to ski it is to “point it and let this ski run full throttle.” The Rustler 9 has enough substance to inspire confidence while carving turns on hard-packed snow at high speeds, yet it also impressed testers with its ability to navigate crud and off-piste terrain with ease. Tester Jon Sexauer described the ideal terrain for the Ruster 9 as, “wide open groomers, evenly spaced trees, and back bowls.” This isn’t the quickest ski edge to edge, so you want to keep to terrain where this ski has room to run. In tighter terrain, the Rustler 9 is manageable at moderate speeds, but it’s not forgiving enough to make skiing in tight trees or bumps effortless.

Tester Nick Loomans, an expert skier with a racing background, was quick to note that “some less aggressive skiers might feel like this ski is a little unforgiving.” That said, testers agreed that when it comes to balancing accessibility and performance, the Rustler 9 is one of the top choices in the all-mountain category. “It’s a strong, energetic ski with an added bonus of being damp—a crowd pleaser for sure,” summed up tester Chad Jacob.

A self-proclaimed gear nerd when it comes to skis and mountain bikes, Jon Sexauer grew up skiing in Northern California, spending the majority of his time getting loose and sendy in terrain parks. He now lives in Colorado and calls Copper Mountain his home hill. Though he still gravitates towards playful and wide all-mountain skis, he’s developed a more open mind when it comes to skis since joining SKI’s official gear test crew five seasons ago. These days, you’ll find him ripping around Copper on his trusty Nordica Enforcer 100s.

Denver Plans Phased Reopening Of Rec Facilities In Might, Outside Swimming...

Indiana Dunes Outside Adventures Pageant is Sept. 9-11 in Porter

Vista Out of doors Collaborating in Upcoming Investor Conferences | Information

The right way to CanoBase- SRT cover tie in / base...