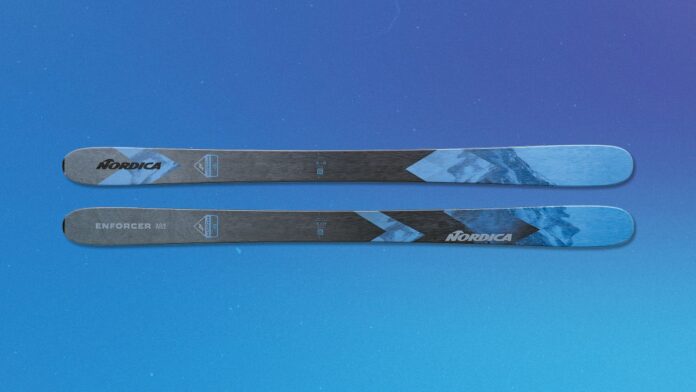 The Nordica Enforcer series has been a dominating product line for years, and for a good reason. Powerful, ultra-dependable, and predictable, the Enforcer 104 Free doesn’t mess around, giving back tenfold whatever you put into it. In the Enforcer lineup, “Free” designates that the model has a turned up tail to enhance versatility and playfulness, a profile you’ll find in the wider skis of the Enforcer line. The Enforcer 104 is the slimmest in the Free series, with a girthier 110 and 115 for deep days that demand more float. Testers found that Enforcer 104 provided ample girth and a solid platform for smearing turns in spring corn, soft snow, and crud. Testers called it a safe choice as an everyday ripper for those out West or a solid pow ski for those out East.

The ski’s wood core, carbon reinforcement, and full-length sidewalls churn out horsepower, while subtle tip rocker and camber give the ski enough effective edge to appease powerful skiers who still want to be able to lay trenches on a wide ski. “This ski literally can do anything,” said tester Chad Jacob, a race coach from the East. “It skis like a bigger version of its baby brothers in the narrower categories. It skis very confidently and wants to be pushed.”

Power is this ski’s defining trait. Thanks to Nordica’s stiff carbon-reinforced chassis, it easily powers through cut-up snow without deflecting, provides substantial edge grip on groomers, and strikes just the right balance between burly and buttery for any turn shape the mountain requires.

Read more: Learn How the Nordica Enforcer 104 Free Stacked Up Against the Competition

While Nordica’s True Tip technology reduces the amount of plastic in the tip and tail and extends the length of the wood core into the shovel to lighten up swing weight and boost maneuverability, few testers would call the Enforcer 104 Free easy to turn or maneuverable. It takes an advanced skier to unlock the potential of this ski, and only those who know how to drive a ski from the front and actively steer their skis will be rewarded on this one. Forgiveness is not the Enforcer’s forté, so don’t expect this ski to let you down easily when your legs have turned to jello by the afternoon. You need to be ready to put some muscle into it because “cruising” isn’t in the Enforcer Free’s vocabulary. According to 6-foot-5 tester and expert skier Sam Cox, this ski “might beat people without strong fundamentals up.”

Lily Krass is a freelance ski journalist based in Jackson, Wyoming with work featured in SKI Magazine, Powder Magazine, Freeskier, Teton Gravity Research, and Ascent Backcountry Snow Journal. She spends winters backcountry skiing in Grand Teton National Park and riding lifts at Jackson Hole Mountain Resort, with the occasional trip to the Alps (for the food, obviously). While she’s been in ski boots since she learned to walk, Lily has been professionally writing about skiing, gear, and all things outdoors for the past seven years. In addition to an all-consuming addiction to powder skiing mixed with heavy doses of Type II fun, Lily takes snacking seriously, and when she’s not writing or sliding on snow, she’s likely deep into a baking project in her tiny kitchen. She is the co-author of Beyond Skid: A Cookbook For Ski Bums, a collection of dirtbag-friendly recipes inspired by life in a mountain town.

Sporting Items European Market Traits and Alternatives to 2025: Concentrate on...

It will not be right here subsequent yr? What the place...

Ideas for Having fun with Outside Actions as Summer time Arrives

The Gear Our Editors Cherished in March