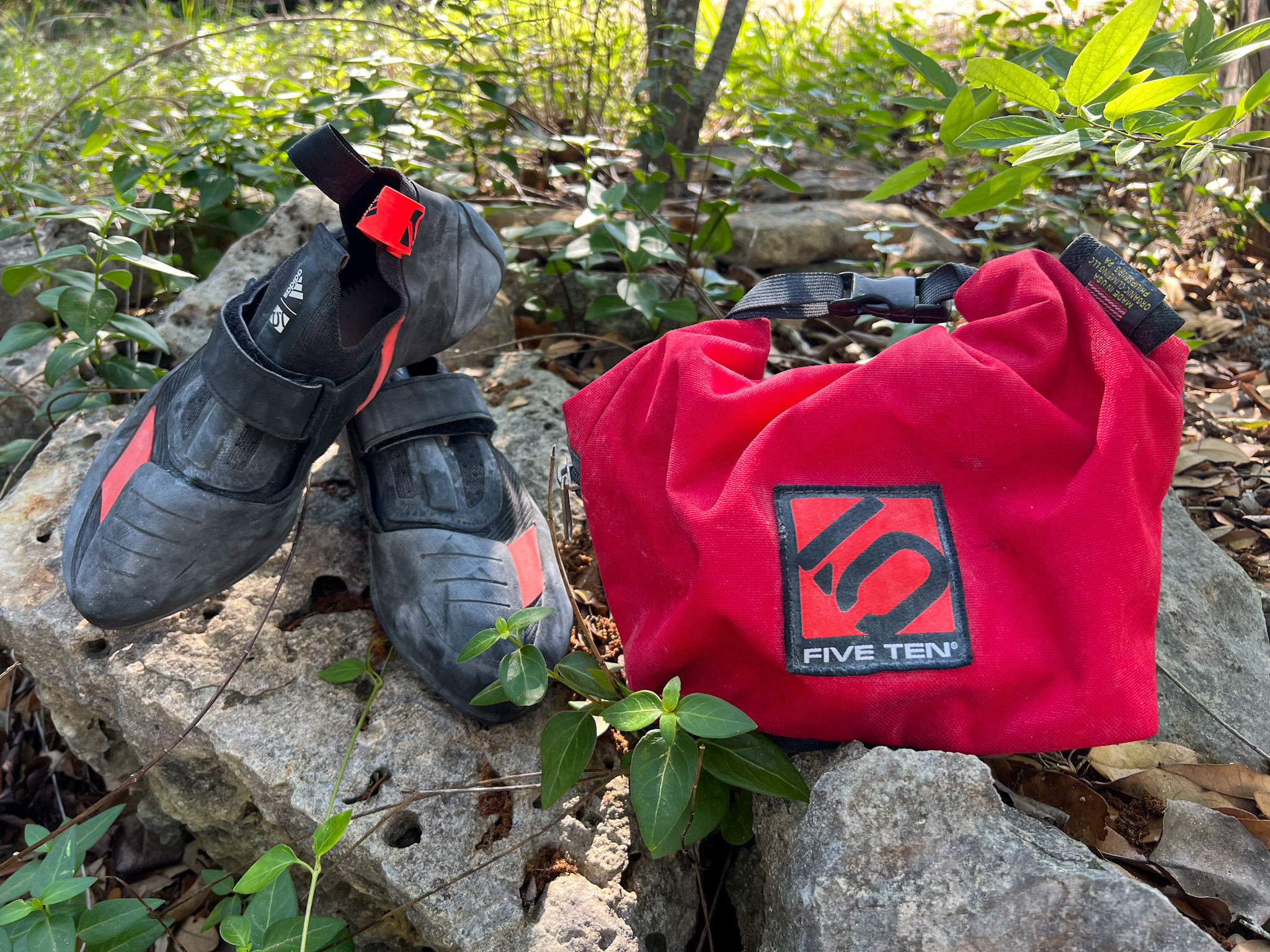 Wider rock shoes tend to have more volume, and narrower shoes tend to have less volume. I was always right in the middle. But the Five Ten Crawe seemed unreal. It fitted my foot like adidas used my shoe as a last. This year they became available after a long delay due to COVID and I couldn’t be happier. And after 3 months of testing on limestone, granite and plastic, they fit and feel even better.

In short, if you’re duck footed and love bolting down steep lines or scaling boulders to the limits of your ability, the Crawe could be the shoe of your dreams. For me it definitely fits.

I did a double take when I slipped down to men’s size 10 (I wear a 10 trainer). Wait, a shoe that didn’t crush my fifth metatarsal? My little toe had support from the outsole? I could kick backwards on that side of my foot – no way!

In fact, it felt like adidas designed the Five Ten Crawe specifically for duckfoot sport climbers and boulderers. The heel felt snug and snug, the mid of the shoe followed the contours of my relatively high arch, and the kicker was that my entire forefoot fit onto the outsole.

Nothing was hanging off the outside edge, there was no excessive upper pressure on my fifth metatarsal, and my pinky toe had room to lay flat. This was the first time a shoe fit my forefoot like this. 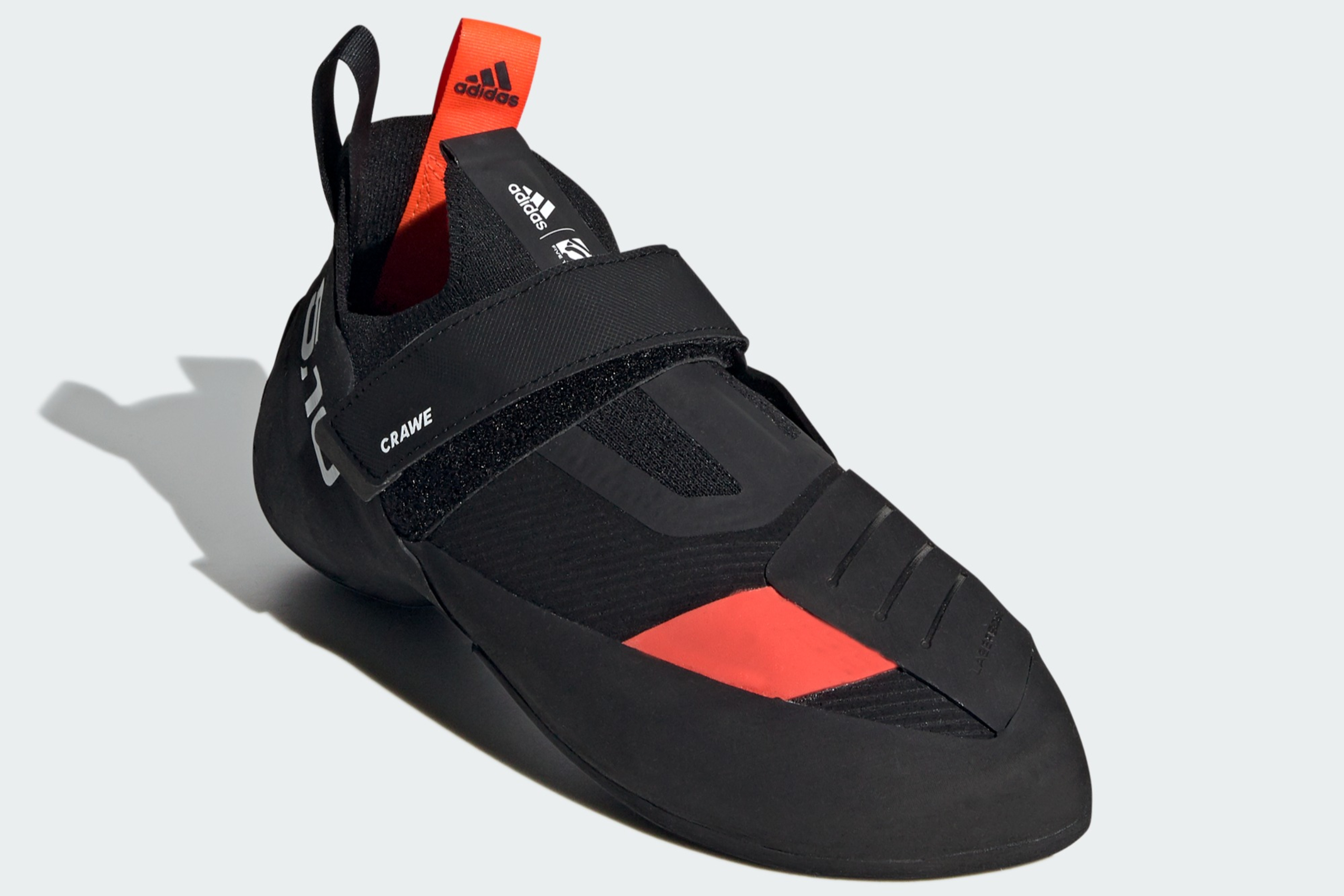 My foot is skinny from top to bottom, so shoes on the wider side have always been too bulky. I would have to crank down the closure straps or laces and the upper would still have wrinkles or gaps between it and the toe of my foot. This problem occurred even with the “LV” (Low Volume) versions of rock shoes.

Not so with the Five Ten Crawe. Thanks in part to the woven and stretchy tongue section of the upper, the Crawe felt snug even before I tightened the single Velcro strap. I found the fit adequate for high performance sport climbing and bouldering – very snug all round but nothing buckling on my toes.

Overall, the Crawe was the best fitting rock shoe I’ve ever worn. I’m still thrilled with their fit and it’s going to be a sad day when the outsole wears out. I really hope Five Ten keeps making them!

Visual inspection of the lined microfiber upper revealed no excess adhesive, unbound edges, or anything else indicating subpar construction or material quality.

Five Ten matched the upper and Stealth C4 outsole snugly, and the outsole edges were square and crisp.

The brand also taped the Velcro on the closure tape around the edges, and all visible seam lines were straight and consistent.

The median downswing and forefoot concavity flattened out in the first month, as did the initial stiffness. After the 3-month testing period for this review, a slight decline persisted. And the stiffness settled to a higher level than that Five Ten Hiangle Pro but was softer than that Five Ten NIAD Moccasym.

The fit didn’t change in absolute length or width, but the upper conformed slightly to the bony prominences of my foot, like the ankle of my big toe. 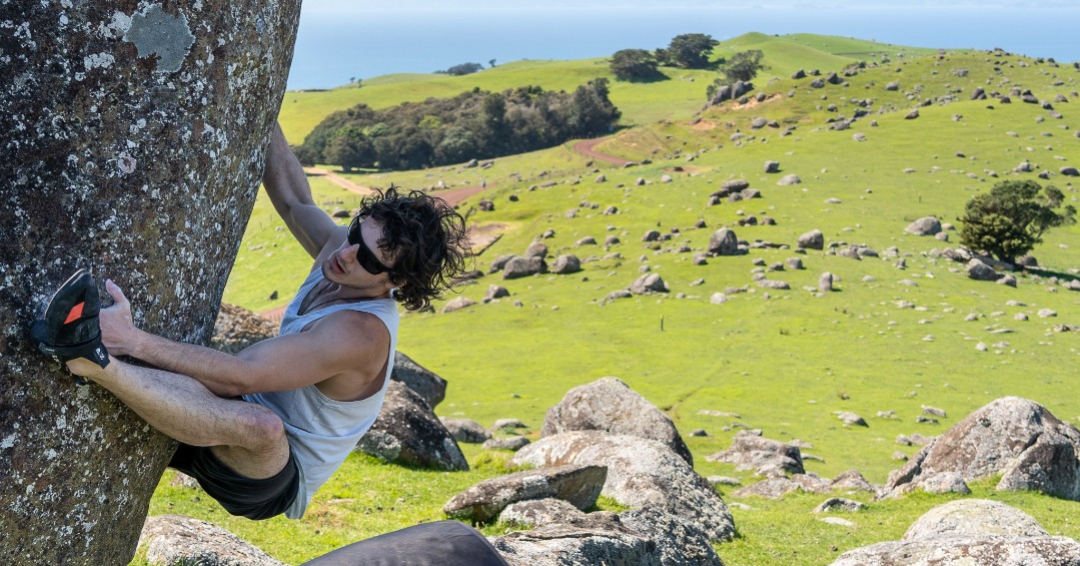 The Five Ten Crawe on the cliffs and plastic

The fantastic fit emphasizes a high-performance shoe for steep rocks and training boards. Because the Five Ten Crawe fitted my foot so well, the other factors like edging, smearing, stinging – really every skill required – felt so much better and more efficient than in a shoe that didn’t fit as well.

After breaking in, the shoe’s stiffness matched edges on small footholds, but not on tiny micro-edges. With strong, practiced feet, pushing down and pulling in on edges of a few millimeters in steep terrain proved to be practicable. But the outsole rolled on the sparse edges common on higher grades on vertical granite.

The Crawe provided sensitive and powerful smearing on lightly textured features on worn limestone and interior volume. They weren’t as sensitive to the nuances of the surface as bare slippers, but they offered just enough feel for anything but the soapy flats on the heavily trafficked local white limestone.

They also felt fantastic indoors on textured but poorly pitched foot chips, like those on a moonboard’s kicker panel. My reliance on C4 rubber undoubtedly helped under the circumstances. The crawe has an asymmetrical shape that concentrates the stress on the big toe and they are quite pointed. This made them powerful pocket pullers and stabbers on the steepest sporting rocks or boulders.

They had just enough feel and flexibility to feel and grab the edge of angular bags, and the built-in forefoot concavity helped with that. Again, the Crawe’s exceptional fit has enhanced these abilities compared to other shoes in this category.

As long as I kept them clean, the Stealth C4 outsole offered the usual and legendary stickiness. If they picked up a layer of lime dust on our funkiest rock, they would noticeably lose grip when greasing and smedging.

Indoors, dust affected both edging and smearing on the smallest and most slanted plastic handles. That’s not the Stealth C4’s fault – any dirty rubber doesn’t stick as well, but C4 is so good that it was super noticeable when it was dirty.

The compact heel worked well for hooking, but the thin Stealth HF rubber on the sides of the heel cup couldn’t protect me from sharp granite crystals or hard plastic edges. I didn’t slip off of those heel hooks, but I had to endure some pain in order to load those parts of the heel hard enough to make aggressive movements.

The woven, stretchy tongue made it easy to get in and out of the shoe, and added noticeable breathability as it got warmer down here in Texas. I could feel the air of a floor fan through this stretch fabric.

Conclusions on the Five Ten Crawe

The big news mainly affects sport climbers and boulderers with goosefoot. I urge anyone with this foot shape to find a better fitting shoe.

The Five Ten Crawe’s combination of skills and attributes makes it ideal for experienced rock climbers looking for the power of an asymmetric last, moderate edging ability, great pocket stitch and pull potential, and proper smear manners. And +1 to all of that for those with a classic duck foot. Stealth C4’s proven stickiness seals the deal.

Kudos to Five Ten for finally making a superbly fitting shoe for the hard to fit duck foot. I now have my shoe for sport climbing and bouldering.

Out of doors Voices: Save on snug athletic pants and hoodies