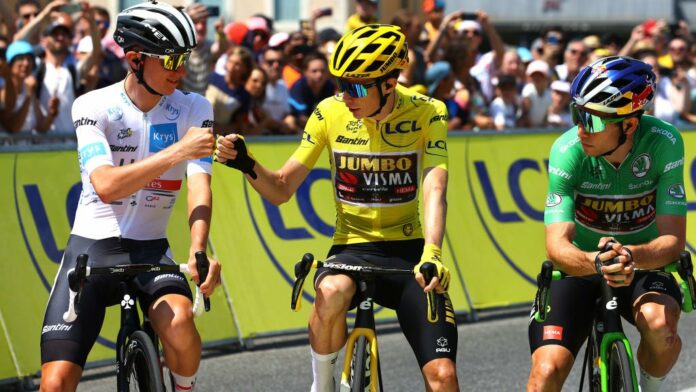 The Tour de France has broken from tradition—and I couldn’t be happier.

For decades, the race’s ownership group, Amaury Sport Organisation (ASO), kept the Tour preserved in time, like Han Solo frozen in carbonite. The rules, regulations, stage distances, and the presence of podium girls all felt like holdovers from a bygone era. At best, this reverence to the race’s 100-year history felt quaint, like watching a baseball game at Wrigley Field. At worst, it was problematic, and watching the race sometimes felt like reading your Uncle Dave’s Facebook posts.

Then, a few years ago, ASO officials started trying out bold and sometimes bizarre experiments to freshen things up. First, they ditched the daily 120-mile stages for shorter and punchier ones, and the shift breathed new action and aggression into the race. Then, they replaced the podium girls with men and women “presenters.” The Tour even tried out a Formula One starting grid during a stage back in 2018, and it backfired in hilarious fashion. Now, there’s even talk of the Tour ditching the final stage in Paris for one along the French riviera.

Of course, the biggest change happened this year, when ASO officials finally launched a bonafide Tour de France for women—and let us all commend them for doing so.

My take: these sudden changes are a sign that the Tour de France is no longer beholden to its own history, and that its organizers are open to innovation, no matter how wacky or weird the idea may be. ASO officials want to spice things up and bring the Tour de France into the 21st century. Well, lucky for them, I have a handful of half-baked ideas.

Perhaps the most challenging concept for casual fans to grasp about the Tour de France is that there are multiple races going on within the event—yep, the fight for the different colored jerseys. There’s the white jersey, given to the fastest rider under 25 years old, the green jersey, awarded to the best sprinter, and the polka-dot jersey—called the King/Queen of the Mountains—given to to the best climber. To win these jerseys, riders must chase points that are available at seemingly arbitrary zones along the course each day. Following the races within the race often requires the use of a calculator (or, for those Tour traditionalists, a slide rule).

Here a basic concept for a jersey competition that any casual fan can understand: the King/Queen of Social Media Jersey, awarded to the rider who generates the most likes, retweets, shares, and comments on Instagram, Twitter, and Facebook (sorry, I’m not on TikTok yet). To honor this award, I propose the Kissy Face jersey (see rendering above).

I predict the battle would heat up as the Tour headed into its second and third weeks, and riders became hungry for likes. Perhaps they would resort to tweeting out theories about Stranger Things, or voicing their hottest takes on Tom Brady, or producing their own music videos in order to win. Who am I kidding—Colombian Rigoberto Uran and Italian Letizia Paternoster would generate the most engagement every year.

I’m not the first person to propose swapping out the podium presenters for friendly animals like pooches or kitty cats. Look, I understand the pushback here. Podium presents do play a role in the daily awards ceremony—they show riders where to stand, and then direct whichever sponsor executive, or local politician, has been chosen that day to hand out the jerseys and medals.

Let’s replace them with animal handlers, and then bring in a few critters that best represent the local fauna. Australia’s Tour Down Under gives riders cute baby kangaroos to hold prior to each stage (see above). I’d love nothing more than to see Peter Sagan accept his ceremonial wheel of cheese from a Mouflon, and for Wout van Aert to receive his green jersey from a Chamois.

Last summer, Australian pro cyclist Lachlan Morton generated headlines far and wide by riding the entire Tour de France route as a bikepacking voyage. Morton covered huge distances by day, and slept in campgrounds or alongside the road at night. He even completed the lengthy transfers between each stage that the riders cover by bus or plane. In total, Morton rode 3,424 miles and finished late at night in Paris. The whimsical ride was called the Alt Tour, and Morton did much of it wearing sandals.

I was Editor-in-chief of VeloNews at the time, and I marveled at the online traffic generated by our coverage of Morton’s ride. Some stories overshadowed the actual Tour de France. I was surprised when team, which never shies away from attention, didn’t tap him to do it again this year.

When you have a flight with Ryanair. pic.twitter.com/lFrjrFTV89

The Tour’s mighty spotlight shines on only a handful of riders each year, and most of the 200 or so cyclists toil away in anonymity. These riders, of course, are the domestiques, or helpers, and their role is to block wind and carry water bottles for the team leaders. It’s incredibly hard and physically demanding, and yet few casual fans know much about this work. The Tour needs to shine a light on these oft-forgotten heroes.

My idea: designate one stage each year to be the official “domestique skills challenge,” which would basically be cycling’s answer to the NHL All-Star skills challenge, in which hockey players compete to see who is the fastest skater, hardest shooter, and best at flinging a puck into manmade islands in a fountain. For cycling, I envision events like the water bottle carry (see above), the teammate pee push, and the race caravan obstacle course.

This one might not be that half baked. The Tour de France Femmes was a huge hit, and a sign that the world is hungry for more women’s cycling. The race was billed as a long-awaited event to have the world’s best women’s cyclists share the Tour de France’s mighty stage with the best men. My idea is to create an event in which the men and women actually share the same competition—a relay race pitting coed teams against each other. There’s already one of these at the UCI’s world championships for road cycling and mountain biking. And, the stars of the Tour and Tour Femmes just completed an exhibition-style event of this nature at the Roosendaal criterium in the Netherlands. The devil would be in the details of how these teams were chosen, and what stakes—if any—would be on the line. I’ll let ASO officials figure that out while I hold my breath for this event to get the green light.

Last month my colleague Caley Fretz demanded that the UCI ban the awkward and downright ugly new time trial helmets made by bike brand Specialized. I totally disagree with this take. As a fan of the film Spaceballs, I feel that the strange headgear is the closest our sport will ever get to aping Rick Moranis as Dark Helmet. Sorry, Gen Z readers, this reference may be before your time.

Check out this video of Formula One driver and global celebrity Valtteri Bottas handing out water bottles to Team Canyon-SRAM riders during the Tour de France Femmes. Pretty cool, huh? Bottas has a vested interest for lending a hand—his partner, Tiffany Cromwell, is Canyon-SRAM’s longtime rider. Still, the clip got me thinking about the intersection of celebrity and access at the Tour de France, and how some cycling super fans would happily pay whatever price necessary to schlep bottles for a team.

The staffers who hand out bottles are called soigneurs, and they also massage the riders after each stage, wash laundry, haul food, and complete dozens of other tasks. My idea is to invite a handful of paying VIPs into the race’s sogineur ranks, to give them the ultimate behind-the-scenes Tour de France experience. Sure, maybe massage duties are off-limits. But if handing out water bottles is fun for Valtteri Bottas, it’s gotta be something a CEO would love to do as well.