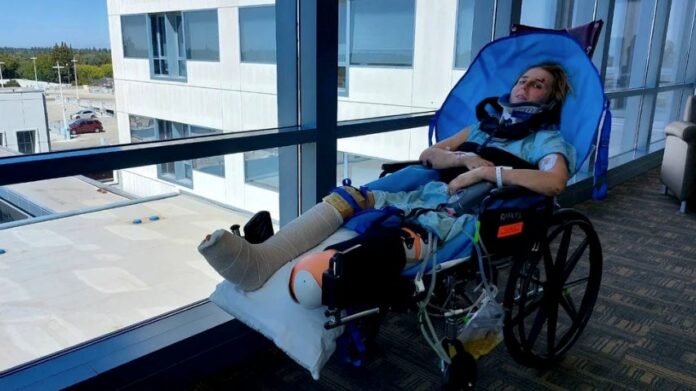 A 21-year-old rock climber from New Zealand is recovering from a terrifying 80-foot fall on Yosemite’s Half Dome.

Anna Parsons was climbing the classic route Snake Dike on August 1 when she slipped and fell down the rock face. She broke nearly every major bone in her body, including her spine and pelvis. The damage to her left foot was irreparable, and Parsons opted to have it amputated shortly after the accident.

The 2,000-foot Snake Dike is a well-known slab route, with pitches that boast 40 to 50 feet of climbing between bolts. It entails approximately eight technical pitches from 5.7 to 5.4, which lead to around 1,000 feet of low-angle scrambling up to Half Dome’s summit.

Parsons and her climbing partner, Jack Evans, had arrived in the United States from their native New Zealand just two days before the incident, hoping to do a bit of climbing before heading to foreign exchange programs in Canada. Both are marine science students who met in college at the University of Otago. Parsons, also a surfer and mountain biker, began climbing with Evans a few months in advance of their Yosemite trip. “We felt very comfortable climbing together,” he said. “We had our systems dialed.”

They’d driven to Yosemite from San Francisco on July 31, climbing the 300-foot Swan Gully (5.6) on Swan Slab as a warmup the day they arrived in the park. They went after Snake Dike the following morning, reaching the wall mid-morning after the route’s six-mile approach, which gains over 2,500 feet of elevation and is considered burly even by Yosemite valley standards.

“It was raining a little bit before we started climbing,” said Evans, “but we gave it a bit and the sky cleared.” He took the lead for the first section, with Parsons later tying in for the 5.7 slab crux pitch. The rock had dried off completely, Evans said, but “the pitch only had one bolt, right before the crux, and it was pretty run out.”

“Anna started off, climbing really strong, and got a 0.75 [cam] in a pocket. She kept going up and right, but she got a bit lost on the route-finding,” he continued, “because we both had thought the bolt would be closer than it was.” She eventually managed to find the pitch’s sole bolt, clipped it, made it across the 5.7 slab crux, and then pulled into the dike itself.

The guidebook the pair was using was fairly minimalist, said Evans. “It just presented the dike, the point where the double-bolted anchor was on the dike,” said Evans, “and then an arrow pointing past that, which just said: No. So it didn’t give details of the topography past [the anchor].”

Parsons was out of his view, ascending the dike, and she climbed past the anchor without realizing it. By the time she saw that she’d skipped the anchor, she was  around 35 to 40 feet above the bolt. She attempted to downclimb the six feet to the anchor below, but her foot slipped, and she fell approximately 70 to 80 feet down the low-angle slab before Evans caught her on belay.

From his position at the belay, a prow obscured her from his view, “but we were in vocal contact,” he said. “She said she was sort of dangling on this low-angle slab, and I could tell she was in an immense amount of pain.” He promptly fixed the belay line off and attempted to use two prusiks to ascend the line to a point where he could see Parsons and analyze the situation, but the rope was running tight over the rock and he was unable to make it around the prow.

Evans immediately returned to the belay and called Yosemite Search and Rescue. “We were extremely lucky that we had service,” he said. “Within half an hour, [YOSAR] had a chopper over to do a visual assessment.” Shortly after, a paramedic managed to reach Parsons and lower her off the vert. At this point, Evans and another rescuer carried her on a stretcher to a spot where the chopper could haul her out.

Luckily, Parsons had been wearing a helmet and she remained conscious throughout the whole ordeal. “The helmet she was wearing was completely demolished,” said Evans. “It was extremely lucky that she had it on.” Doctors reported she had no sign of head trauma.

Unfortunately, nearly every other bone in her body was broken. “She had artificial vertebrae put in and they had to fuse quite a few bits of her spine,” said Parsons’s brother, Ben Parsons. In addition to her smashed fibula and half-a-dozen fractured ribs, she had a broken pelvis, a punctured lung, five broken toes on her right foot, significant cuts on her face and body, and a lengthy list of other injuries.

Her left foot was shattered, and the talus bone was also missing, ripped out during the fall. “It was probably left somewhere on the mountain,” said Ben Parsons. “[The doctors] told her that without it, her foot was damaged beyond repair.” She could opt to have the foot fused, but she’d only be able to walk with a severe limp for the rest of her life, much less hike, run, surf, or climb. Instead, she chose to have her leg amputated halfway between knee and ankle, as this would allow her to eventually be fitted with a prosthesis and regain some of her mobility.

“[Our family] was all trying to do research, help her weigh the options,” said Ben Parsons. “It was a big, tough decision. But eventually, Anna just made the call, ‘Nope, this is what I’m doing.’ She didn’t care about the amputation, she just wanted to choose whatever would help her get back to surfing, climbing, doing the things she loves. That’s just the kind of person she is.”

Evans, who was at her side in the hospital in Modesto, California, also mentioned Parsons’s buoyant spirit. “She was awake and positive only 24 hours after this incredibly traumatic thing, and still in so much pain, but smiling, cracking jokes, laughing.”

While New Zealand nationwide’s no-fault personal injury insurance program AAC (Accident Compensation Corporation) will cover the majority of Parsons’s treatment and recovery once she’s able to return home, Ben Parsons said she was racking up bills in excess of $4,000 per day while recuperating at an American hospital in Modesto, in addition to the numerous extensive surgeries she’s already undergone and which lie ahead. Her travel insurance covers a small portion of this, but her medical bills already exceed $1,000,000.

As a result, her family is hoping to bring Parsons home as soon as she can fly, but it remains to be seen how soon that will be. Her sister, Jessica, set up a donation page to raise funds to help cover her bills, including for the prosthesis, treatment, and rehab.

A Large-Wave Surfer Is Suing the WSL After Almost Dying at...

Add These 5 Backcountry Lodges to Your Journey Bucket Record

These four Gear Packing Ideas Can Save Your Automotive Tenting Journey