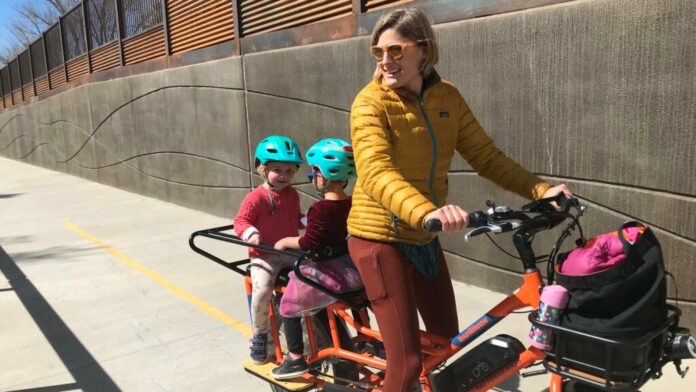 Sitting in my shed, next to an electrical outlet, is my favorite piece of outdoor gear: an absurdly heavy, slightly clunky, blaze-orange electric cargo bike with an extended rear for carrying kids or groceries or just about anything else. In all my years of outdoor sports, I’ve never loved a tent, a pair of boots, a snowboard, or even a mountain bike as much as I love my RadWagon—perhaps because, in the years when I had more time for outdoor sports, I didn’t appreciate the freedom conferred by my gear nearly as much as I do now.

In this particular season of my life, at age 38, I spend more time working and caring for my young daughter and an elderly parent on the other side of the country than I do skiing, camping, or going on long mountain bike rides in southwest Colorado’s San Juan Mountains, which rise just behind my house. Most of my outdoor gear comes out infrequently—if I can squeeze in an hour-long mountain bike ride a week, I consider myself lucky. But my e-bike is my workhorse. I use it nearly every day, no matter the season or weather. I take it to the grocery store, my daughter’s preschool, the bank and the brewery, the playground and the pharmacy, and wherever else I need to go. I love it because it injects a dose of joy and outdoor time into the flow of regular, mundane days that comprise my daily life.

I got my RadWagon in late September 2021. By September 28, 2022—almost exactly one year later—the bike’s odometer hit 1,000 miles. I was on a paved trail that runs alongside the Animas River, and I stopped riding to snap a picture of the odometer on my phone. I felt a little proud, a little giddy, and, to be honest, a little smug. Those were 1,000 miles that I didn’t wait in traffic, didn’t pump gas, and didn’t sit in a climate-controlled metal-and-plastic box separating me from the rest of the living, breathing world.

What did I do, in those thousand miles? In the winter, I paused longer than was necessary at stop signs to blow on my fingers or stick them in my armpits. In the summer, I relished the wind cutting through the afternoon heat as I gathered speed on a downhill. In the spring, I noticed the first crocus buds pushing through the soil. In the fall, I smelled roasting green chiles and rode through swirls of golden cottonwood leaves. I moved through the world in a way that felt more elemental, more interconnected, than sitting behind a steering wheel waiting for a light to turn green.

I should clarify that I don’t ride my e-bike for exercise, although I can adjust the pedal assist with the push of a button to allow me to use my leg muscles more or less. And I wasn’t someone who never bike commuted before getting an electric bike. Pre-RadWagon, I tried to bike instead of drive when I could, but there were plenty of reasons to choose the car. Driving was faster and I was running late, for instance. Or I needed to carry more stuff than I could fit in a backpack or pannier. Or, as my daughter got older and heavier, I didn’t want to haul her up steep hills and show up someplace dripping with sweat. Etcetera.

I moved through the world in a way that felt more elemental, more interconnected, than sitting behind a steering wheel waiting for a light to turn green.

The e-bike eliminates all those excuses. It helps that I live in a bike-friendly town: it’s relatively easy to stay on side streets and avoid busy roads, and most places I need to go are within a five-mile radius of my house, which means I can often get somewhere just as quickly by e-bike as by car. (A 2021 study from London showed that e-cargo bikes delivered packages 60 percent faster than delivery trucks or vans, in part because they avoid traffic jams.) Biking also releases less carbon dioxide and helps save money on gas and parking, but those aren’t the real reasons I do it. I do it because it’s more fun than driving. I do it because it’s a way to be outside even on the busiest days, and because I know that spending even 15 minutes outside makes my day better and brighter and more balanced. I do it because it forces me to slow down without costing me my whole day, and because it allows me to move my body and wave to neighbors while I’m running errands. I do it, quite simply, because it makes me happy. And if there’s a way to bring even an iota of additional happiness or fun into the endless march of ordinary moments that make up our day-to-day lives, why not?

Hardcore bike commuters probably know these benefits well. But hardcore bike commuters represent a fairly small sliver of the human population, which is another bit of the magic of e-bikes: they expand the bike commuting community, potentially exponentially. They bring in older folks, people who are not super fit, delivery drivers, and parents who have to transport two kids, a soccer ball, a pair of cleats, a dance costume, and a snack to share. They expand the circle, which is never a bad thing.

Apparently there are still some unenlightened humans out there who make fun of e-bikes, just like certain close-minded folks once made fun of snowboarders or people who wore fanny packs or rode bikes in jean shorts. Maybe they’ll come around to e-bikes some day. And if they do, I, for one, will open the circle a little wider and welcome them in.

Try the names of Black Stars gamers who’re in Doha for...