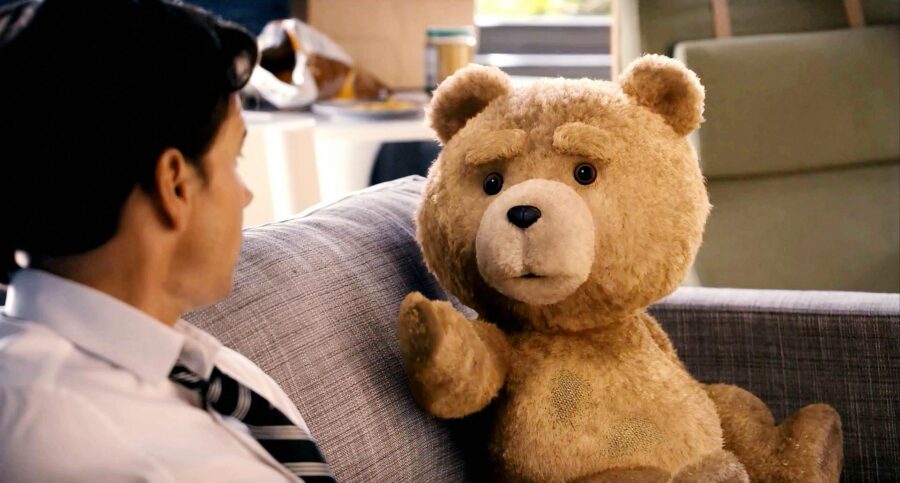 By James Brizuela | 3 seconds ago

Seth MacFarlane is undoubtedly one of the most gifted comedians of our generation. He is the creator of one of television’s longest-running animated shows, Family Guy, which began in 1999. He also tied this to another hit series called American Dad. His sense of humor is certainly on par with most of the work he is involved in. While his film repertoire isn’t as extensive as his television work, there is one of his films that is loved by all and is climbing the streaming charts. The beloved and foul teddy bed, Ted. The film sees Mark Wahlberg wishing his teddy bear had the gift of life, which happens, except this isn’t a happily ever after story. Ted is getting old and so is John Bennett (Wahlberg). As the two grow older and live as roommates, chaos ensues.

One of the things that sets Ted apart from most other comedies is the hilarious realism that the story incorporates. A bear in the 1980s comes to life, and would it stay that old? Well, of course not. Seth MacFarlane also recognized the great comedic nature that Mark Wahlberg could produce and immediately placed him in the cast. Ted followed the hit comedy The Other Guys, which saw Wahlberg and Will Ferrell teaming up as oddball detectives. While this movie is certainly the buddy cop type, Ted is more the raunchy buddy best friend type. Ted witnesses John Bennett being friendless in 1985 and wishing for his teddy bear to come to life, which he does. They grow older together and are now roommates. John Bennett is currently in a relationship with Lori Collins, but their relationship is strained by Ted’s antics. One of those antics is bringing along hookers during Lori and John’s anniversary dinner. They argue with each other, and Ted is asked to leave and eventually go out on his own, which doesn’t go too well. The film stars Wahlberg, Seth MacFarlane as Ted, Mila Kunis and a host of other comedians and actors including Giovani Ribisi, Patrick Warburton and Joel McHale.

One of the most hilarious scenes of the entire film was when John (Mark Wahlberg) and Ted fought in a hotel room. John insults Ted by claiming he wishes he had a Teddy Ruxpin instead of Ted. This clue may spring to mind for many people, but Teddy Ruxpin was a 1980s teddy bear who “spoke”. The conversation consisted mostly of the pre-recorded messages, which you could play back at the touch of a button. So John and Ted go at each other and it ends in a pretty brutal fight between them. It’s hilarious to say the least. The fight was also nominated in the Best Fight category at the MTV Movie Awards. You can see a clip of the fight below:

Ted was Seth MacFarlane’s directorial debut. Although this may have been his first directorial film, it was very successful. Budgeted at $50 million, the film would go nuts both in the US and overseas. The worldwide box office totaled just over $549 million. While the film has a decent 69% critic rating and 73% audience rating on Rotten Tomatoes, you can’t argue with the numbers. The movie was a hit. So much so that it led to a Ted 2 sequel that brought back Mark Wahlberg. Sadly, Mila Kunis didn’t return, but the sequel is every bit as ridiculous as the first film. That’s the beauty of the humor Seth MacFarlane brings to much of the things he writes. Most of what he writes is so absurd, but therein lies the genius, because the absurdity is self-aware. Some writers tend to hesitate about where to draw the line, but he skips that line all the time.

Ted is certainly the kind of movie that will excite people who want a good laugh without having to worry about such an extensively clever plot. Sometimes we all need to turn our minds off and let some raunchy and simplistic comedy make us laugh. Mark Wahlberg and Seth MacFarlane are a hilarious couple, and there’s a big reason this comedy is in the HBO Max top ten right now. Fans of “Family Guy” and “American Dad” will surely get a lot of the same humor and absurdity in Ted.

Reopening Ontario out of doors leisure websites ought to concentrate on...

Armadillos, bobcats and black bears: Careers within the nice outside are...

Damaged Complete Gymnasium Press Up Bar and Some New Workouts