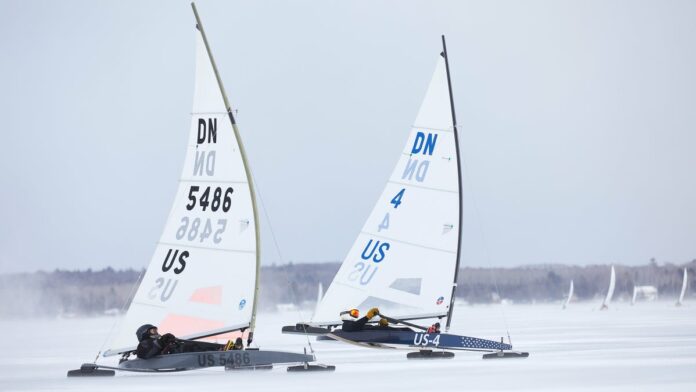 Growing up in Bellevue, Ohio, just south of Lake Erie, Brian Kaiser heard stories about locals who went ice sailing, gliding their boats across the frozen Great Lakes during winter’s most frigid months. In January he got a chance to learn more about this obscure sport at the North American championship, in which DN iceboats—a class of vessels conceived in the U.S. that feature a minimal hull and a perpendicular crosspiece with attached skates, or “runners”—raced across Black Lake, in Michigan. He donned crampons to tread the eight-inch-thick ice and taped a hand warmer to his camera after it began to freeze amid the zero-degree conditions. “This sport is a labor of love,” Kaiser says. “The weather is incredibly fickle, and some have to travel hundreds of miles in the dead of winter to get to the lake.” Ice sailing requires two key elements: strong winds to help propel the 12-foot boat, and a lake surface solid enough to support its 150-pound weight, plus the pilot. While this year’s competition went off without a hitch, ice sailing’s long-term future is uncertain. Climate change is causing milder winters in the region and has drastically decreased the lakes’ ice cover. While shooting these photos, Kaiser was as interested in spotlighting this unique pastime as he was sharing what may eventually be lost to the environmental crisis.

Pushing off at the start of the championship race, organized by the International DN Ice Yacht Racing Association.

On a practice day at Michigan’s White Lake, a racer demonstrates how the mouth guard can protect against an errant rudder.

Rounding the turn near the halfway point.

An iceboat racer wearing a protective face mask and bodysuit.

Helmets are required for participation.

An official indicating the wind direction.

Stretching before the event.

A motorized sled used to ferry people and gear.

A ­competitor securing a runner to a boat.

A flag and yellow rope mark the starting and finish lines.

4 World Cups and a weekend of World Championship motion headline...

The hazards of mountaineering: What must be carried out with the...

Governor Lamont Proclaims Plans at Connecticut State Parks for the 2021...