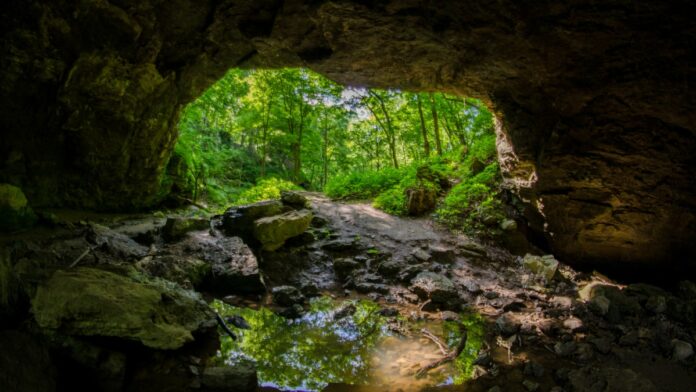 Three people were killed in a shooting Friday morning at Maquoketa Caves State Park in Iowa, and the alleged gunman appears to have shot himself to death, state officials say.

Located in eastern Iowa, the park is one of the state’s most popular attractions for experienced spelunkers and casual hikers alike. It covers 370 acres and boasts 13 caves and six miles of trails lined with hardwood trees and high bluffs.

Police responded to reports of a shooting at the state park’s campground shortly before 6:30 a.m., said Mike Krapfl, the special agent in charge of the Iowa Division of Criminal Investigation, during a news conference. As officers searched the campground, they found three people dead. One camper, who investigators believed to be armed, was unaccounted for.

Authorities later found the body of Anthony Orlando Sherwin, 23, a short distance west of the campground, apparently dead from a self-inflicted gunshot wound. It is unclear whether Sherwin had any relationship to the victims.

The park was locked down at around 8 a.m., a Maquoketa Caves employee told the Quad-City Times. Children attending Camp Shalom, a Christian camp near the park, were also evacuated. According to a Facebook post, all campers and staff have been accounted for.

State officials said there is no ongoing threat to the public. The entire park is closed until further notice.

“I’m horrified by the shooting this morning at Maquoketa Caves State Park and devastated by the loss of three innocent lives,” Iowa governor Kim Reynolds said in a statement Friday.

The Cash Drawback – This Boulder was made utilizing solely Cash