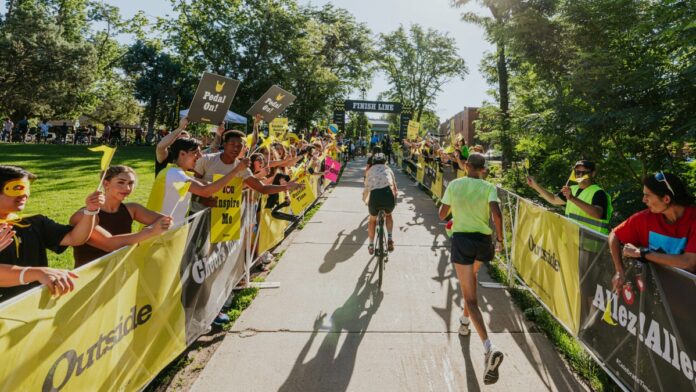 You don’t need to be riding up Alp d’Huez to get cheered this loud.

On July  21, unsuspecting cyclists and runners in Boulder, Colorado, received a standing ovation midway through their commutes and workouts at the Outside Flash Finish. The flash mob-style cheering section provided inspiration and motivation to hardcore athletes, dog walkers, and everyone in between who were making their way along the Boulder Creek path near downtown. The project coincided with Outside’s new Biking For All hub: a page where all cyclists—from hardcore racers to first-time commuters—can find the practical information and inspiration to keep them rolling. The Flash Finish was launched by Outside’s parent company Outside Interactive Inc. as a way to reward everyday people for getting outdoors. Recent research says that 60 percent of American adults spend no more than five hours a week outdoors—a paltry amount when compared to the time we spend in front of computer screens or on the phone. And the problem isn’t likely to subside. The 2021 Common Sense Census report states that teenagers spend upwards of nine hours each day staring at a screen. Meanwhile, the average U.S. child spends six minutes a day outside.

Those statistics may paint a rosy picture for tech companies, but they paint a dismal one for the outdoors, and for the next generation of adventurers, athletes, and outdoor enthusiasts. The Flash Finish aimed to give everyday people the positive reinforcement they may need to keep walking, running, biking, or doing any other activity, every day. The promotion coincides with an NFT drop from cycling artist James Arnold, as well as a cycling sweepstakes on mapping app TrailForks.

Climbing is like consuming an elephant one chunk at a time...

With arrival of Victoria Day weekend, listed below are some tenting...