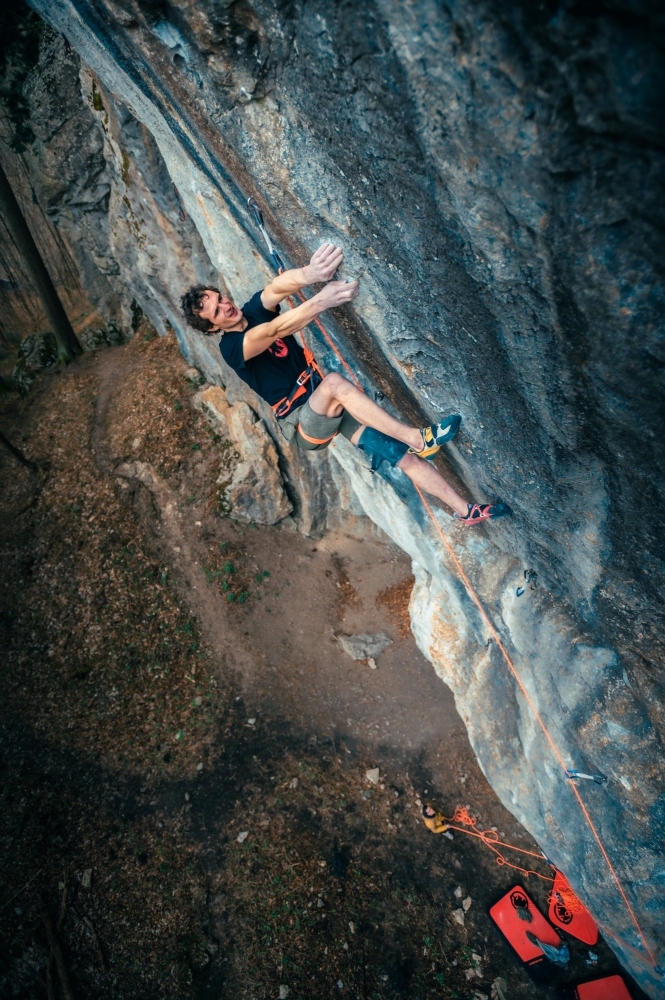 On 20/11/2022 at Holštejn in the Moravian Karst in the Czech Republic Adam Ondra made the first ascent of Zvěřinec, a 9b+ he rates as ‘the second hardest route of my life.’

Earlier today Adam Ondra established Zvěřinec at his home crag Holštejn in the Moravian Karst which he has described as “the second hardest route of my life.” The hardest of course being Silence, the world’s first 9c put up by Ondra at Flatanger in Norway in 2017.

Zvěřinec adds a different start to Perlorodka, Czechia’s first 9a+ established in 2011 by Ondra, although retrospectively he feels 9b may well be more appropriate. The new start is circa 9a+ in its own right before reaching a rest and tackling the 8B+ boulder crux of Perlorodka, resulting in what Ondra has specified as a “hard 9b+.

Ondra worked the route in April and although he got close to the send, warm temperatures forced he to remain patient. He returned this autumn and after realtively poor conditions, finally got lucky today. He warmed up at home, drove quickly to the crag and redpointed the line first go, making optimal use of the excellent friction in 0°C temperatures.

Writing to planetmountain.com after the redpoint, the 29-year-old explained “It’s quite a unique blend of power-endurance and bouldering power. It is about 25moves of power endurance on small holds, at first steep, then slightly overhanging and quite old-school, but super intense, non-stop. This section is probably 9a+ by itself. Then there is good undecling rest, followed by 6 sketchy moves into a better rest – splits and undercling, alternating with a sketchy kneebar). Then there’s the 8B+ crux of around 10 moves, before climbing more easily to the top.”

Ondra believes this most recent addition is of particular importance. Hopefully it will receive more attention than the Czech Republic’s only other 9b+, Vasil Vasil, established by Ondra in 2013 and still unrepeated almost 10 years down the line.

We Had Marlon Brando’s Island Utopia to Ourselves

Home on nation street perched close to village and out of...