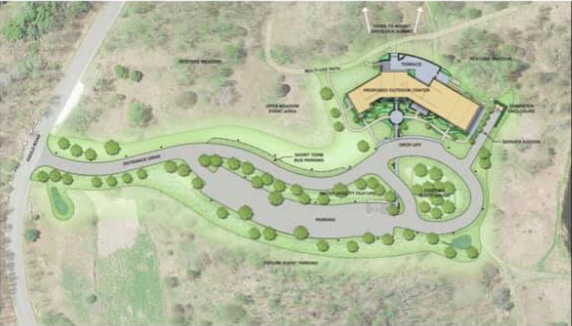 On Wednesday, Adams Town Administrator Jay R. Green and members of the Adams Selectboard joined Congressman Richard E. Neal in making the announcement. Funding is provided through Congressional Directed Spending (CDS) by the Department of Housing and Urban Development (HUD).

The Outdoor Center is one of four components of the Greylock Glen master plan. The project includes a hotel/conference center, a four-season campsite with traditional and glamping options, and an amphitheater. It’s an attempt to increase the area’s economic opportunity by attracting visitors to Mt. Greylock and the northern Berkshires for outdoor pursuits such as hiking, camping, mountain biking, cross-country skiing and snowmobiling.

As of 2006, the state Department of Conservation and Recreation (DCR) and the City of Adams worked to plan and permit the proposed $50 million Greylock Glen project. In May 2021, the state issued $6.5 million in government bonds. The groundbreaking ceremony took place in August 2022.

This project is one of ten CDS projects submitted by Congressman Neal totaling over $9 million in investments throughout Massachusetts’ First Congressional District. This funding is in addition to a $2.9 million US Economic Development Administration (EDA) grant from the American Rescue Plan to improve water infrastructure at Greylock Glen.

Oil to proceed climbing by means of the remainder of 2021...

Golden sees improve in unlawful in a single day tenting