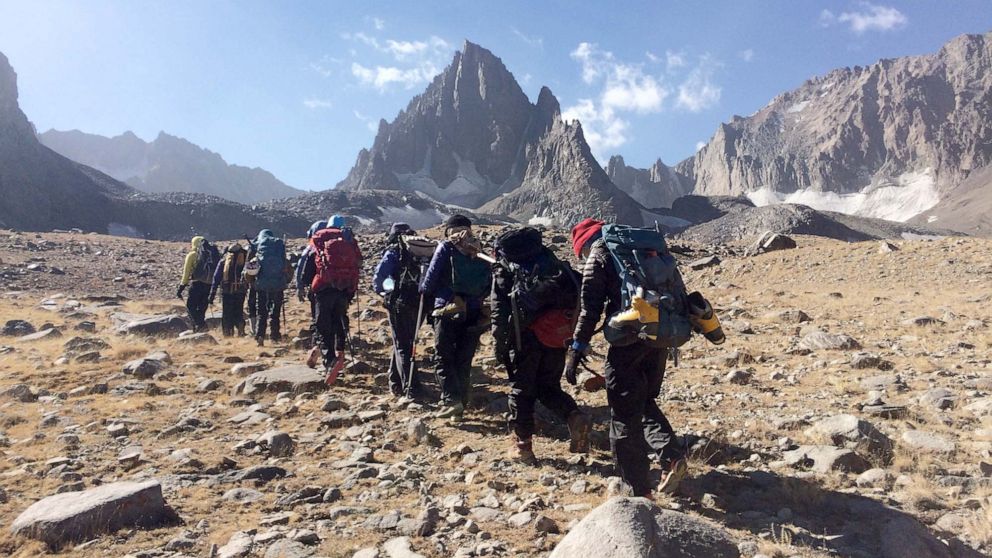 For girls and young women who are used to mountain climbing and fitness training six times a week, imprisonment in a crowded wedding hall near an airport in northern Afghanistan is a different kind of fateful challenge.

It is the new reality for dozens of them affiliated with Ascend, an organization teaching Afghan women and girls in athletic leadership skills. They came to Mazar-e-Sharif airport 10 days ago to undertake evacuation flights blocked by the Taliban, which heightened their fear of being left behind.

“We’re trying to remind them that we haven’t forgotten you. The world hasn’t forgotten you, ”Marina LeGree, founder and chief executive officer of Ascend, told ABC News. “But some lose hope.”

While the first passenger flight from Kabul since the Taliban came to power took off on Thursday, bringing some US citizens and other Westerners on board, the vulnerable Afghans still in the country face life and death worries, especially women like those from Ascend who have exercised their independence independently of the Taliban rule for the past 20 years.

Established in 2014, Ascend is a US-based non-profit organization operating in Afghanistan that recruits a new group of Afghan girls and young women, ages 15 to 24, each year for a two-year mountaineering program. The recruits – who trained at Ghaza Stadium, used by the last Taliban government for public punishment – have a mission to promote leadership, volunteering and the physical and mental wellbeing of the next generation.

But if the group stays behind in Mazar-e-Sharif, LeGree fears they will be married off to Taliban fighters – or worse.

For more than a week, the Taliban have not allowed at least six charter flights from Mazar-e-Sharif International Airport in northern Afghanistan because some evacuees do not have the necessary documents to take off. The stalemate becomes dire for some passengers, including the women from Ascend.

Speaking to ABC News from Naples, where she is trying to get the State Department and others to help, LeGree said her group had traveled from Kabul without their families, understanding that they would be evacuated days ago. You’ve been telling her since the toilets got “gross” and it was difficult to sleep.

“I’ve separated teenage girls from their families in this type of environment with the Taliban and men everywhere. It’s uncontrolled and it’s not comfortable at all,” she said.

Six commercial aircraft sit on the ground near the main terminal of Mazar-i-Sharif airport in northern Afghanistan on September 3, 2021.

Many women associated with Ascend were born before birth or were too young to remember the last time the Taliban ruled Afghanistan – when women were banned from school, forced to wear, and wear all-encompassing burqas to be accompanied by a male relative when they went outside. Accustomed to their independence, as 80% of Ascend graduates complete a higher education, they fear for their future under the new “caretaker government” of the Taliban – which so far does not have women in power.

LeGree blamed the US for promising to evacuate vulnerable Afghans but missing “precious time” as the Taliban became better organized.

“This is quite a number of women who are at the mercy of the carnage when we can do nothing – I am appalled that my government has reacted so weakly,” LeGree said.

“We gave you all the details of these people, and you released them and called them over, and now you’re saying, ‘You must have travel documents and don’t worry, if you do, you can leave.’ “This is a total waiver of responsibility, and it’s just – it’s morally offensive,” she added.

At least 1,000 people attempt to fly from Mazar-e-Sherif on these charter flights, including at least 19 US citizens and two green card holders. She was told the Taliban entered the detention center several times and took people away, but those she is in contact with do not know why.

So wait for now.

State Department spokesman Ned Price said Thursday the Biden government was doing everything possible to get the planes started, including opening private talks with the Taliban through Special Envoy Zalmay Khalilzad and the new U.S. mission in Doha.

“The United States has pulled out all the stops to facilitate the departure of these charter flights from Mazar. The charter flights, of course, did not take off from Mazar – I can tell you that has nothing to do with inaction or action by the United States government, and we agreed that the Taliban would support those who have expressed the wish in this way want to allow this to leave, “he said.

Foreign Minister Antony Blinken also said Wednesday that the charter flights in Mazar-e-Sharif will have to “move” but that there are “limits” to what the US can achieve without staff on the ground and without an airport under its control. He said it was his understanding that the Taliban are refusing flights that combine passengers with valid travel documents and those without valid travel documents.

LeGree said that was not enough.

“It was a really tough day for me to see what Blinken was saying because I had high hopes, because he was in Doha, that it would be easy for him to push on the Qataris, push on the Taliban, just us let go – and it didn’t happen, “she said.

While Ascend has seen 56 workers and Afghans successfully evacuated, LeGree said it will be hard to sleep until all of the 88 who asked for evacuation are gone.

Despite the hardship, Ascend plans to somewhat resume operations once the situation in Afghanistan calms down. There are still about 150 women and alumni affiliated with the program who have stayed behind and have expressed hope of continuing their mission. Ascend moved into a new facility this year, and LeGree paid the landlord the rent on Wednesday while he kept the building for her, though she’s unsure if she could return to the land she loves herself.

“Don’t assume we’re closing the store. Quite the contrary,” LeGree said. “We have to shine the light on Afghan girls and women. The Taliban have now bullied their way into power, but they have to rule. Let us stick with them.”

US women are increasing support

When Jahna Cook and Danielle Jefko of Madison, Wisconsin, learned that Ascend was still holding women in Afghanistan hoping for evacuation, they felt the United States called them to get involved

“Their stories drew our hearts and saved us because we are women, we are mothers, and we climb together,” said Cook. “The freedom, achievement and leadership these girls so clearly have on the mountain was so relatable, and to see them face the impending crisis we knew we had to do something.”

Jahna Cook and Danielle Jefko held a walking tour in Madison, Wisconsin, on September 5, 2021 to raise awareness and funds for Ascend, a nonprofit that works in Afghanistan to empower young women.

Inspired by an annual 50K race that Ascend hosts in the UK, Cook and Jefko made plans for a sister 50K race before moving the race up two weeks as the chartered planes with Ascend members remained on the ground. The women posted photos of the girls along their route, she said, to keep track of their intentions.

The two continue to encourage others to donate to the Ascend Relocation Fund or to call their elected officials.

“We want to make sure people know that this is not a closed topic,” said Cook. “There are still people there who urgently need our help.”

Tenting at Ottawa Metro Park for the 4th of July |...