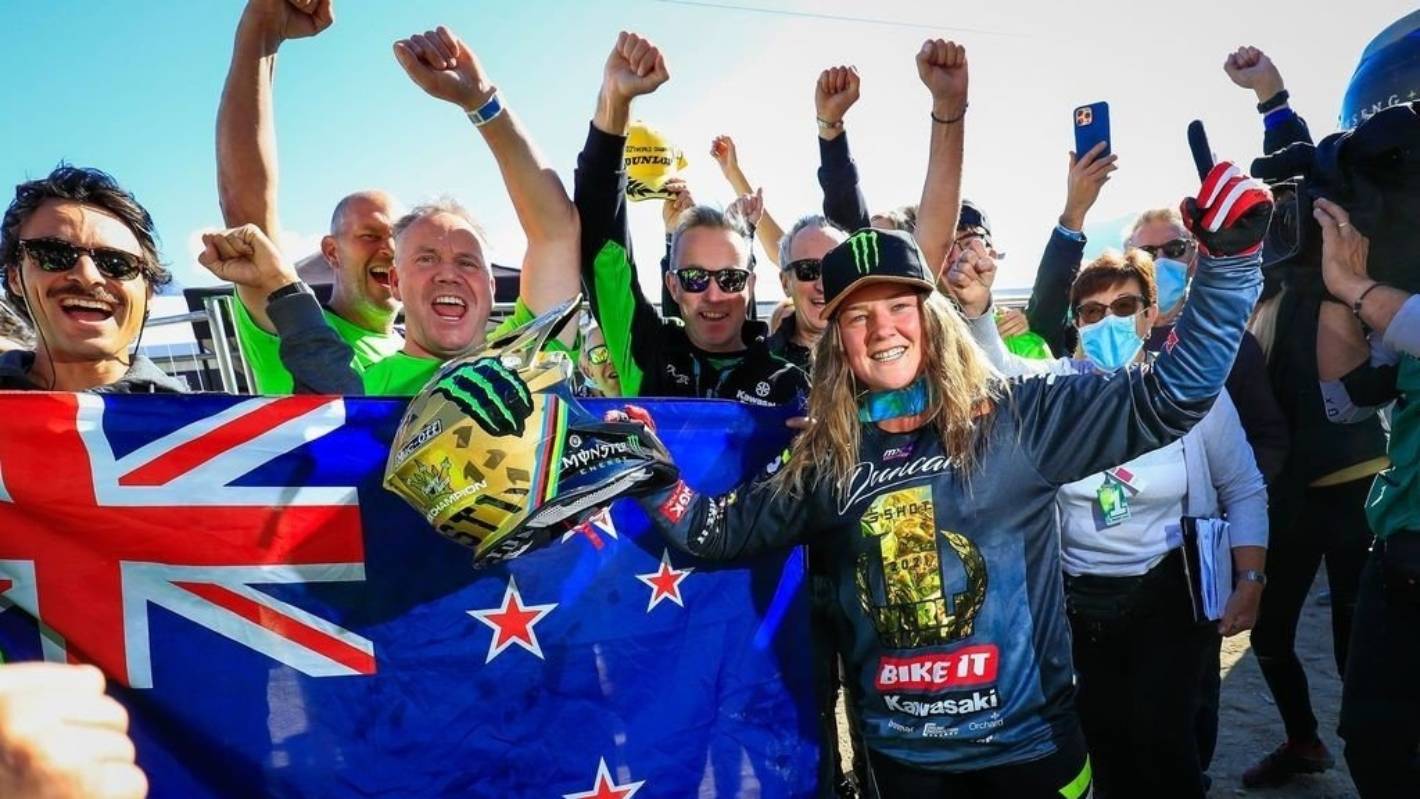 Courtney Duncan is a modern-day Kiwi sporting great who is happy to rub handlebars at 100km/h and jump high into the air on her Kawasaki but less comfortable with other heights, until now.

The pride of Palmerston, just north of Dunedin, is revving up the throttle and her typically Kiwi sense of humor for this week’s back chat to talk going outside her comfort zone to climb mountains over summer, asking for trifle in Managed Isolation and Quarantine (MIQ ) and training with the Highlanders.

Courtney Duncan conquers a fear of heights to climb Single Cone, the highest point on the Remarkables mountain range.

You’re won three consecutive world championships, what motivates you for a fourth?

Just wanting to leave a legacy and see how many I can rack up. I guess some athletes would say it’s harder to find motivation once you’ve won a couple but for me, I feel like the motivation just gets stronger. Once you win one you want two… now I’ve won three I definitely want four.

Where do you keep your world championship gold medals?

The majority of them are still in Europe. I actually need to box them up and get them home.

READ MORE:
* Boxer David Nyika on Tyson Fury ‘craziness’, missing his dog and fights with his brother
* Back Chat: How George Bennett followed the Black Caps during the Tour de France
* Back Chat: Glenn Delaney recalls when he ranted the entire halftime break
* Back Chat: Mark Sorenson to get the Black Sox batting again after three-year time-out

Do you remember your first race in the WMX and what was running through your head?

I definitely remember it, like it was yesterday. I was so nervous just because I knew how much was on the line and how many sacrifices we’d all made to get to that point. So it was one of those situations where I kind of had to win and showcase something special.

You lost what would have been your first world championship to a rouge photographer who walked onto the track. Have you ever seen them around since?

No, but funny you say that as I got asked about that the other day if anything had ever happened to them? I never saw them again. Maybe they are a wee bit scared of me? I do not know. I’m not that scary, am I?

You spent Christmas day in MIQ, did you get a special meal or a present?

It was a lot different from normal obviously but I was pretty lucky, they treated you pretty well. We got a special Christmas lunch and there was a request for some trifle and they gave me that too, so that was pretty cool.

Dunedin’s a reasonably small place can you walk through the city without getting recognized these days?

I do get stopped quite a bit but to be fair it’s probably more because most people know each other and they just like to say congratulations and stuff like that. It’s cool.

I’m picking you don’t get the back-to-work blues like some of us but it must be pretty average leaving New Zealand again is it?

Yes, especially this time. I want to be honest and say I don’t really feel ready to leave yet after a short turnaround when I was away for seven months. Being at home around friends and family, you realize how much you miss home but at the end of the day this is my job and there’s rewards that lie on the otherside.

The shirts are temporarily on for this training session.

You’ve spent your off-season doing some mad stuff like climbing Single Cone, how hard was that compared to say a final lap in the heat of Turkey?

There was one stage of it when I was just about in tears and I said to my mate you go and I’m just going to wait here. It was definitely a mental challenge for me, something out of my comfort zone because I’m a little bit afraid of heights but It was cool once I’d done it. I’ve kind of got the bug for it now, I might climb Mount Cook next – no, I’m joking on that.

I’m an ice cream girl, I love ice cream but for a meal, I’d have to say a nice Italian pizza.

Why will the Highlanders win Super Rugby Pacific this year?

Because I did some of the pre-season with them.

Who would make the best motocross rider out of their squad?

That’s a tough one, a really tough one. I’d probably have to say Nuggy (Aaron Smith) because he’s good at everything.

Will these additions increase effort to make Jordan River a recreation...

Jefferson County deal seen as ‘win-win’ for out of doors recreation,...

The Gear Our Editors Beloved in November