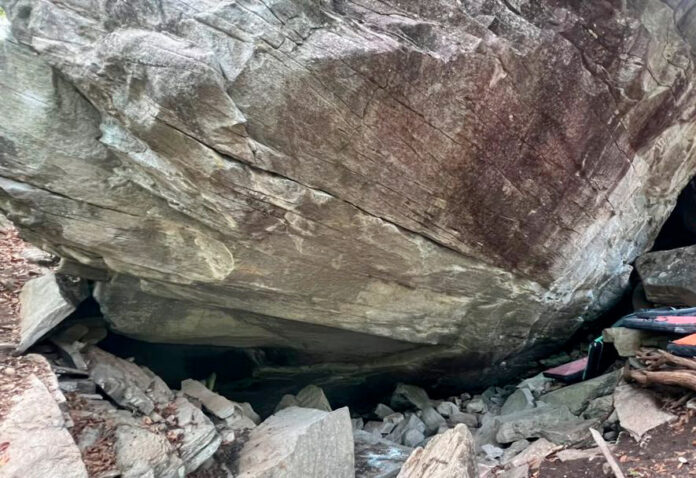 24-year-old British rock climber Aidan Roberts has made the first repeat of Alphane, the boulder problem at Chironico in Switzerland first ascended by Shawn Raboutou in April 2022 and graded 9A by the American.

Last week British rock climber Aidan Roberts astounded many with his swift, first repeat of the boulder problem Alphane at Chironico in Switzerland. Discovered by Dave Graham at the start of the new millennium and first ascended by Shawn Raboutou on 6 April 2022, at 9A it is currently only one of three boulders to be given this grade, and the first to have its grade confirmed. The other two are Burden of Dreams in Finland, established by Nalle Hukkataival back in 2016, and Return of the Sleepwalker at Red Rocks, USA, first ascended by Daniel Woods in 2021.

After a first productive visit in spring during which he managed all the individual moves, Roberts trained specifically back at home and then returned to Switzerland last week with another extremely powerful Brit, Will Bosi. Using slightly different beta compared to the first ascensionist, the pair quickly started making important progress. Even the unseasonable 20°C temperatures did not stop the 24-year-old who, after a quick warm-up on the upper section, sent the entire problem with disconcerting ease on the first go of the day.

Talking in the Careless Talk podcast immediately after his ascent he explained “it was cool because it felt ambitious, it was something that felt really hard, and then when I did it, it felt relatively effortless, which I think is probably the nature of such a climb. But this led me to believe that it wasn’t the living end, or right at the absolute limit of my capabilities, which is quite exciting!”

While grades obviously hold importance, on his Instagram post Roberts underlined the value of the entire process that led to his success: “Every day of effort, on rock or replica, felt to bear fruit with lessons of subtleties in movement, intricacy of holds and optimising mindset. I’ve got nothing but positive memories surrounding this climb and lots of days sharing methods with friends. It feels as though every session has been a success, almost a shame that there won’t be more to come!”

In the past Roberts has completed a slew of first ascents and repeats up to 8C+, and flashed up to 8B. Interestingly, he has even built a replica of Burden of Dreams on his home wall after a visit to Finland last year using moulds of 3D prints he got from scanning the actual holds, and while the style of this boulder is completely different from Alphane – basically 5 excruciatingly difficult moves – it’ll be fascinating to see how he progresses on this in the future. In the meantime, Roberts is still in the “valleys of endless projects” with Bosi who has made promising links.

CCTV photographs launched after sporting items price about $14,000 stolen in...

What’s the Weirdest Factor You’ve Ever Taken on a Backpacking Journey?