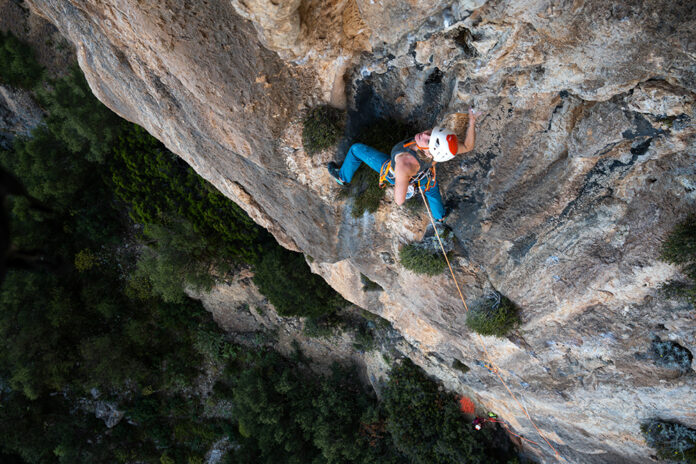 Polish rock climber Aleksandra Taistra has made the first repeat of Oltreconfine on Monte Ginnircu in Sardinia, established by Fabio Palma, Matteo Della Bordella and Domenico Soldarini in 2006 and 2007.

With 8c+ sport climbs and big multi-pitch repeats in Sardinia under her belt such as Hotel Supramonte (2019), Amico Fragile (2020) and Mezzogiorno di Fuoco (2020), Aleksandra Taistra is certainly used to pushing the envelope. Recently though the Polish climber believes she climbed her psychologically most demanding route to date, namely Oltreconfine on the Amor de Mi Vida wall of Monte Ginnircu in Sardinia.

First ascended by Fabio Palma, Matteo Della Bordella and Domenico Soldarini in two stints in 2006 and 2007, this line was established ground-up past long sections of exposed, hard obligatory climbing and although the pitches officially check in at 7c max, the route is arguably more taxing mentally than it is physically. The long runouts between the bolts give route route a distinct alpine feel; Taistra worked it extensively, often on her own (!), sometimes at night even to wire the moves, before her eventual redpoint on 26 April.

While Paolo Spreafico freed all the pitches individually in 2007, Rolando Larcher onsighted the climb later that year to make the first single day redpoint ascent. Since then other parties have attempted the line unsuccessfully, and it is highly likely that Taistra’s tenacious repeat is only the second single day free ascent of this beyond the border.

The state of mind I experienced when confronted with Oltreconfine was absolutely priceless. For the first time in my life, I truly felt that nothing apart from the next move mattered. That was when I realised what “being in a moment” really means…

Oltreconfine consists of 220 metres of the most beautiful climbing immaginabile on the Ginnirqu wall in Baunei region of Sardinia. The route is 8 pitches high (7c, 7a+, 6c trad, 7c, 7a+, 7a, 7c, 6a), is split in two by a large ledge, and offers a variety of different rock formations. The words I’d read in one of the climbing guidebooks initially filled me with optimism, however, what then unfolded on the turned out to be a completely different story.

On the entire route, so in 220 metres, there are only 31 bolts, and I sincerely doubt I’ve miscounted and missed one or two… Although the technical challenges of each pitch quickly became secondary, I focused all my efforts on reaching maximum physical fitness and stamina, to accompany the mental fortitude I’ve been training for years. Dirty and fragile rock was another difficulty, as probably no one touched this route in a very long time; on R3+/III climbing this can cause some additional stress.

Why did I chose this route? After all my equipment was stolen at Gorropu at the end of October 2021 while I was climbing Con le ali sotto ai piedi, and then a series of other unpleasant events, like injury which put me out of action for over 6 weeks, I decided to move to Baunei. During my recovery I was looking for an inspiration for the new season and Fabio Palma, whom I’ve been in touch with, recommended two routes he himself had established. One of these was Oltreconfine.

I tried to located and check out the top section of the route on my own, while Alessandro helped me find the best places to abseil. After a week of just abseiling and jumaring (as those were the only things I was capable of doing when injured), it turned out that actually I was on the wrong line! The one I wanted to climb was next to it! This was the first time in my life that I thought that I’m letting myself in for something completely new, something completely different from all other multipitches I’d done so far… So when I packed all my things and left Sardinia, I immediately bought a return ticket for February 2022. The seed for Oltreconfine was sown and it became a perfect project to begin the new season with!

I dogged the route, mainly on my own, in April. This wasn’t particularly early due to a lot of traverses and big runouts. While working the line, on some pitches I added a few cams and I found some threads. I finally led it clean on 27 April with Jacek Wejster and I can safely say it was the most mentally challenging multipitch I’ve ever done! A small, but very important, step in my climbing career.

The 13 Most Lovely City Hikes in America

Climbing health club to open on the finish of summer time...