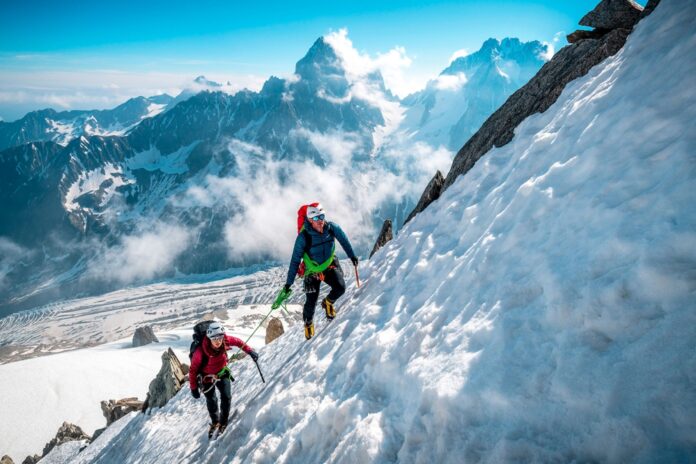 “Chamonix is the birthplace of alpine climbing, maybe of climbing altogether, and its glaciers, spires and granite walls have inspired generations of alpinists through the centuries. There are thousands and thousands of climbing routes in all styles in the valley, and it can at times be difficult to pick just what to climb. After a decade as a professional photographer in Chamonix, here is a very subjective list of the ten routes I enjoyed climbing the most, and where to find them in Mont Blanc Lines.”

1. Aiguilles Grises/Voie du Pape, Mont Blanc – South-West Face
PD+, Bonin, Graselli, Pie XI, Gadin, Proment, 1890.
“Ok, so you want to climb Mont Blanc. I get it, the view is amazing from up there. But the two normal routes on the French side have their fair share of issues: overcrowding, nearly impossible to get a hut reservation and significant objective danger (rockfall on the Goûter couloir, serac fall on the Trois Monts). My solution: cross to the wild Italian side and climb the Italian normal route, the Pope Route or the Aiguilles Grises. Technically no harder than the Goûter, just a lot longer: getting to the Gonella hut alone is a full alpine day! If you are well acclimatised and fit, its atmosphere is second to none.” Find this route on Page 24, Line 3

2. Forbes Arête, Aiguille du Chardonnet
AD, Sisley, Crettez, Crettez, 1899
“A very complete and varied route, a beautiful knife-edge ridge, a prominent summit, never too difficult or scary, a perfect length (long enough to feel like a journey, not so long that it feels endless and makes you want to take up knitting instead of climbing), the Forbes Arête has it all. Just make sure you don”t underestimate the descent – there is significant route finding and many obstacles before the safety of the Albert Premier hut.” Find this route on Page 144, Line 1

3. Contamine Route, Pointes Lachenal
6a+/5c obl., Contamine, Labrunie, Wohlschlag, 1959
“Less crowded than its cousin the Rébuffat on the south pillar of Aiguille du Midi due to its shockingly long approach of … checks notes … thirty minutes of walking or five minutes of skiing, the climbing on the Contamine is just as glorious. Facing south, easy to bail from, fairly well protected, sustained at the grade, it offers the best of moderate alpine rock climbing in the range. It is also the perfect way to test yourself before attempting more ambitious routes on the Tacul satellites or Aiguilles de Chamonix. Best of all, in the spring, it forms a natural combination with skiing Vallée Blanche to finish your day!” Find this route on Page 121, Line 24

4. Routes of the Red Pillar of Aiguille de Blaitière, Aiguilles de Chamonix – North-West Faces
6b/6a obl., Piola, Steiner, 1985
“Of all the granite routes I have ever climbed in Chamonix, L”Eau rance d”Arabie stands out for the quality of its climbing, at the limit of my (pre-fatherhood) abilities yet well protected and never feeling quite desperate. The approach is a tad long by Chamonix standards (about one hour and thirty minutes from Plan de l”Aiguille) and requires crampons in the early season, but all is forgotten as soon as you get on the devious first pitch, a seemingly blank slab graded at sandbagged 6b. If it proves too much, the ever popular and much easier Nabot Léon is right around the corner.” Find this route on Page 92, Line 21

5. Grütter Arête, Aiguilles de Chamonix – North-West Faces
D 5b, Aubert, Grütter, 1935
“Maybe it”s the glacial approach, maybe its committing nature, or maybe it just doesn”t stand out enough from the valley, but the Grütter ridge really deserves to be better known. A serious but never too hard route on one of the great yet rarely visited summits of the Aiguilles de Chamonix, it is comparable to the South Ridge of Aiguille du Moine. If you forget about the constant ballet of the Aiguille du Midi cable car, solitude is pretty much guaranteed.” Find this route on Page 100, Line 32

6. Grands Montets Ridge, Aiguille Verte – North Face
D 4c, Dalloz, Lagarde, de Ségogne, 1925
“Probably my grandest alpine adventure, it is a real journey into the sky that requires speed and proficiency in every alpine discipline: moving fast over rotten terrain, Chamonix chimneying, proper granite rock climbing (but in big boots and with a bivvy pack on), moderate ice, and efficient downclimbing/rappelling of the Whymper couloir before the sun hits. If you do it the traditional way, with a bivvy at the far end of Pointe Ségogne, you will be treated to one of the best experiences the range has to offer: sunrise on the summit of Aiguille Verte!” Find this route on Page 50, Line 34

7. Normal Route of Aiguille de la République, Aiguilles du Chamonix – South Faces
D+ 6c+/4c obl., Bozon, Couttet, Hugonnet, Ravanel, 1928
“The pointiest of a range that has no shortage of pointy pieces of rock, the summit of Aiguille de la République is barely wide enough to stand on and guarded by a nasty little slab (which ninety-nine per cent of climbers aid through). Below it stand 800 metres of fairly high angle rock and an often desperate bergschrund. Speed through simul climbing is the name of the game here, as the only somewhat difficult pitches are at the very bottom and the very top. Just don”t underestimate the route finding, as we found out…” Find this route on Page 108, Line 66

8. North Arête of Dôme du Goûter, Mont Blanc – North Face
PD+, Millot, Millot, Payot, Payot, Charlet, 1872
“I am firmly convinced that the best way to climb Mont Blanc (after using thermals to land a paraglider on the top) is on skis. If you pick the right conditions, most of it is skinning up, and you get to actually have fun on the way down instead of cursing every god while feeling your meniscus (menisci?) grind away. Though the Trois Monts gets done on skis, by far the most popular way is via the (amazing) Grands Mulets hut. Just don”t be an idiot and go up the actual Grands Mulets and its very, very serac threatened Grand and Petit Plateau, those are strictly to be crossed as fast as possible on the way down. Instead, head up the north ridge of Dôme du Goûter just off to the right. It”s barely more difficult, just required good ski crampons on the lowest section and a bit of carrying below Pointe Bravais, and you”ll be at the Vallot hut before you know it.” Find this route on Page 6, Line 11 and Page 9, Line 17

9. Swiss Route, Courtes – North Face
D+ WI3, Cornaz, Mathey, 1938
“If you think big icy north faces might be in your future, do yourself a favour and try to climb this first. It”s just like its big sister les Droites, just a lot shorter and slightly less steep. If you can move efficiently through that kind of terrain and manage to descend the other side before the sun sets, you should be able to start looking at bigger objectives. If, on the other hand, you spend the whole day getting 200 meters below the top, then try to traverse to the NNE face, then end up bivying in January without any equipment under a big boulder, then start skiing down a random slope you think is the NNE face but is actually the top of the (5.5) Austrian route, then realise this is very dumb and take the whole next day abseiling down leaving all your gear on the mountain, then end up getting back with frostbite, all the while with PGHM looking for you because you didn”t come back but didn”t tell anyone where you were going, well … maybe it”s good you didn”t go to Grandes Jorasses instead.” Find this route on Page 44, Line 8

10. Frendo Spur, Aiguille du Midi – North Face
D 5c/5.5 E4, Frendo, Rionda, 1944/Boivin, Giacomini, 1977
“This route should be on every aspiring alpine climber”s list, and not just because it runs pretty much under the cable car and you want to be able to smugly tell the tourists in flip flops “Oh this? No, I climbed up, I like it better that way.” It also offers spectacular and varied climbing, solid and sustained rock on the lower half, and a striking snow ridge that turns into a steep ice slope near the end. You need to be efficient to catch the last bin (and get good conditions on the upper section), unless you want to turn it into a real adventure and bivvy on top of the rock.” Find this route on Page 78, Line 22

ALEX BUISSE
Alex Buisse fell in love with climbing and photography in his early twenties and the two fed each other: the need to climb bigger and wilder mountains so he could get better images, and the need to become a better photographer to do justice to the epic scenes unfolding in front of him. He has travelled the world as a professional photographer and has worked for many prestigious clients, including Patagonia, BMW, Red Bull, VISA, the International Olympic Committee, Sports Illustrated and GEO magazine. He lived and worked as a professional photographer in Chamonix for over a decade and has climbed, skied and flown all over the Mont Blanc massif – Mont Blanc Lines is the culmination of this work. He now lives in Canmore, Alberta, in the heart of the Canadian Rockies, with his wife and two children, but misses Chamonix too much to stay away for long, frequently travelling back to the French Alps. For more information about Alex and his work, visit www.alexbuisse.com

Mont Blanc Lines is available to pre-order now from www.adventurebooks.com

Ontario Recreation District will probably be internet hosting a youth out...