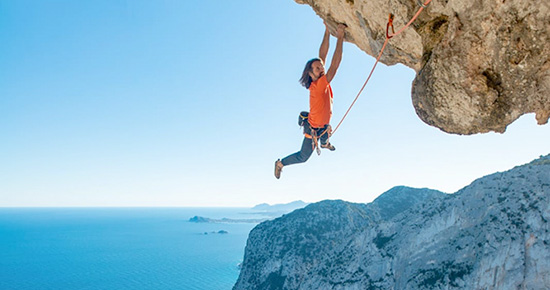 German rock climber Alexander Huber has made the first ascent of the multi-pitch route La Bavarese at Punta Giradili in Sardinia, Italy.

After his deep water solo Il Capitano at Capo Monte Santo and Onda Azzurra on Monte Donneneittu, Alexander Huber has further consolidated his ties with Sardinia by establishing La Bavarese on one of the main symbols of Sardinian climbing, Punta Giradili close to Baunei.

The route put up by the German climbs through the huge Grutta Pintata cave by following the first three pitches of Nike, put up Jan Kareš & partners, after which it continues independently for another three pitches past the line of “least resistance” to breach the roof. The route put up a fight though, as the 6 pitches check in as follows: V, 8a+, 8b+, 8b, 8b+, 7b+. Huber established the route ground-up last spring and returned in October for the first free ascent but the line was drenched and another trip was needed. The redpoint was made on February 5th with climbing partner and photographer Riky Felderer.

Alex tell us about this special Bavarese!
Jan Kares had opened a route through the central overhang of Grutta Pintata four years ago. My original goal was to free this route, but then I realised that after the third pitch the “line of least resistance” ran further to the right and in three days I opened three new pitches ground-up to the top. In terms of protection, the first three pitches are pure sport climbing, after which the route becomes much more of an alpine undertaking.

What’s the climbing like?
Due to the extreme angle Bavarese demands above all really athletic climbing and a good sense of three-dimensional movement in order to find the correct moves and most efficient sequences. The whole is much greater than the sum of the individual parts: the four extremely pumpy pitches greatly increase the overall difficulty when compared to the grade of each single pitch.

When did you climb it?
I climbed the route for the first time last February. In October I wanted to free it, but rain stopped playThis is one of the characteristics of Grutta Pintata, the climbing is mainly on tufas and stalactites, and after heavy rains these seep for a long time. I returned to the Ogliastra region in January specifically for the redpoint. An important factor in my success was undoubtedly the support I got from the small but close-knit community of Ogliastra climbers. Riky Felderer not only took some fantastic photos, but he was also my climbing partner during the first free ascent on 5 February 2022.

You often return to climb in Sardinia. What makes this island special for you?
This unique combination of rock, sea, landscape and culture is rarely found elsewhere. Sardinia is a true paradise for us climbers, and after the various projects I’ve climbed in the Ogliastra area, I can also say that I have made some true friends here.

How you can Repair (Nearly) Something on a Trip

I Eat These Tenting Meals Even Once I’m Not Tenting