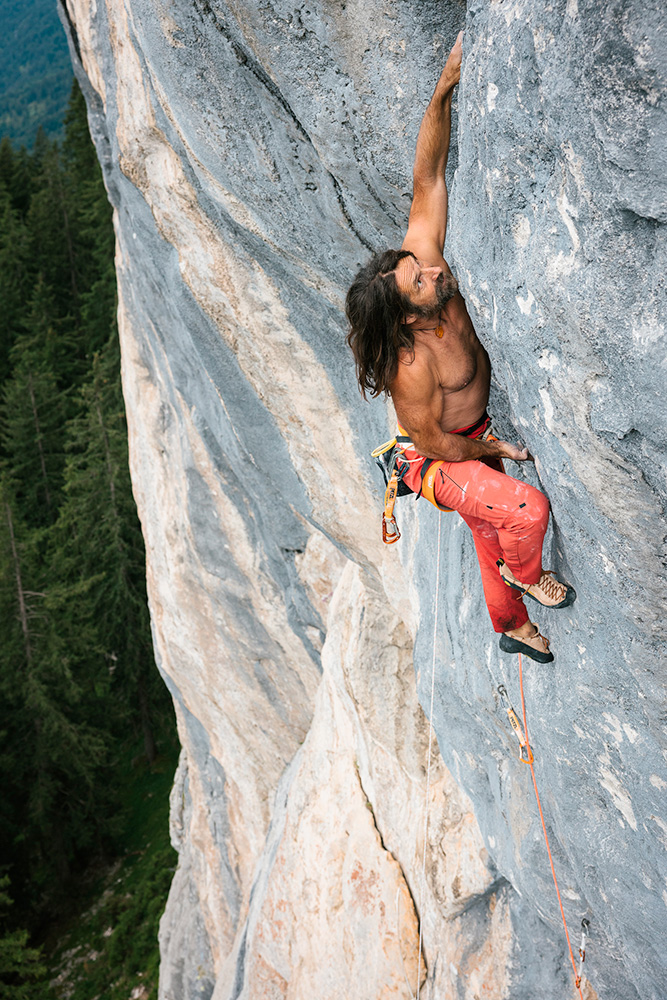 On the 18th of July German climber Alexander Huber made the first free ascent of Ramayana, a 6-pitch 8b+ on Waidringer Steinplatte in Austria.

Located on the smooth south-facing Waidringer Steinplatte, the six-pitch outing shares the first three pitches of Karma which Huber established in 2010 with his elder brother Thomas, before breaking off left and continuing to the top of the cliff. Huber Jr forged the remaining three pitches last autumn, climbing ground-up and alone with a Soloist.

The first two pitches are relatively straightforward, but pitch 3 packs a punch, as the 53-year-old explained: “Forty meters. Steep, compact and bullet-proof limestone. Athletic climbing with a series of bouldery sections sum up to F8b+.” Two 7c pitches provide a slight breather, before finishing with a tricky 8a+. The result, in Huber’s words, is “airy, steep and beautiful. Six pitches of perfect climbing…”

As with all of of Huber’s creations on these walls, the route sports bolts but also some runout sections, and a set of wires and Cams to #3 are necessary to integrate the protection. The German completed the first redpoint with Tobi Ebner on the 18th of July.

ALEXANDER HUBER
Born on 30 December 1968, for the last three decades Alexander Huber has been one of the strongest and most complete climbers in the world, his accomplishments spanning the vertical spectrum, from cutting-edge single pitch sports routes to huge big walls and complex climbs at altitude. Standout achievements include the first ascents of Om, a 9a at Triangel freed in 1992 (just one year after Wolfgang Güllich’s Action Directe), the 9a Weiße Rose (Schleierwasserfall, 1994) and above all Open Air, reputed to be the world’s first 9a+ located at Schleierwasserfall and freed in 1996. On the big wall front Alex Huber pulled off the first free ascent of legendary Salathé Wall on El Capitan in Yosemite in 1995, and followed this up with El Nino, the über-classic Freerider in 1998 and Zodiac in 2003. He summited Cho Oyo in 1998 but at altitude has always preferred ultra-technical routes, such as his 1996 Latok II West Face line with his brother Thomas, Toni Gutsch and Conrad Anker, and the coveted first free ascent of Eternal Flame up Nameless Tower in Pakistan’s Trango Towers massif with Thomas in 2009. He has obviously left his mark in his home mountains, the Alps, with masterpieces such as Bellavista and Panorama (Tre Cime di Lavaredo, Dolomites). Furthermore, he has carried out numerous daring free solos such as Opportunist 8b and Kommunist 8b+ (Schleierwasserfall), Hasse Brandler (Tre Cime di Lavaredo) and the Swiss Route up Grand Capucin, Mont Blanc.

The Greatest Winter Tires for Vehicles, SUVs, and Crossovers

Belief fund to enhance the Mississippi outdoor has been permitted