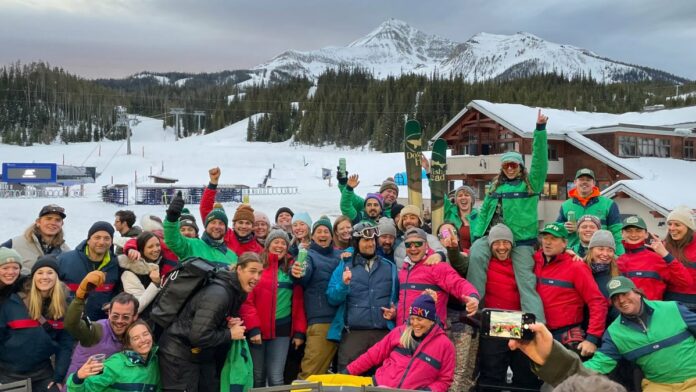 Today’s skiing headlines are dominated by the likes of Mikaela Shiffrin, Breezy Johnson, and Tricia Mangan, but in the late 1960s, Charles Bird (CB) Vaughan Jr. was the era’s household skiing name. A legendary ski racer and onetime speed-skating world-record holder, Vaughan pushed the limits of what was possible on skis and inspired a new generation of skiers. But he left his most indelible mark on the ski industry after his days of podium finishes were over, with his brand: CB Sports. What began as a single offering—the CB Sports Super Pant—evolved into a full line of colorful, awesomely eighties performance-ski apparel that shaped what it meant to look like a skier. The distinctive “CB” logo on the back of the jacket’s stand-up collar became a point of pride for many skiers as CB Sports ushered in a coming-of-age for American ski culture.

Don’t be surprised if you see that same iconic logo in lift lines this season. Vertical Brands—one of the leading brand builders in outdoor and performance apparel—is bringing CB Sports back. The new line of CB Sports apparel includes classic looks from the brand’s heyday, but the pieces aren’t just a symbol of nostalgia for the good old days of skiing. Under the leadership of Christopher Neary, who has more than 20 years of experience producing apparel for big names in the ski industry, Vertical Brands aims to elevate the CB Sports brand with new styles and cutting-edge materials. They say what’s old becomes new again, but that’s only partly true in this case, because you can guarantee they didn’t have this kind of performance tech in the eighties.

The Making of a Ski-Industry Icon

To understand where this heritage brand is going, it’s important to know where it came from. Vaughan, a Vermont native, was captain of the St. Lawrence University ski team, a member of the U.S. Ski Team, and, perhaps most famously, the onetime holder of a world speed record. Toward the end of his ski career, the legend turned his attention to skiwear. “I didn’t know exactly what performance ski apparel was, but I knew there was an opportunity there,” he says. “I had some money left over from ski-racing wins, so I asked some friends to invest and started the CB Sports apparel company.”

CB Sports was lean in the early years. Vaughan and his wife at the time peddled the Super Pant out of the back of his car, knocking on doors across Vermont. “Normally I didn’t even make an appointment because no one knew what I was doing,” he says. “I’d show up at a shop, try the pants on in front of them, and usually get some interest.”

The original Super Pants had Velcro and heavy-duty zippers—elements retailers had never seen before. “A lot of shops saw the pants and asked if they could order a few pairs to sell. Before long, we extended our line to include jackets,” Vaughan says. “We soon had a couple hundred ski schools, teams, and VIPs in the marketplace wearing our gear.”

Vaughan applied lessons he’d learned as an athlete to selling his clothing line. “I kept going with the idea that no isn’t an answer,” he says. “We were definitely bootstrapping in those first three years, but then things exploded.”

Bill McCabe, former president of skiwear brand Serac (sold to Marmot in 2004) and a longstanding expert in performance fabric, admires Vaughan as an industry trailblazer. “He was the king of three-ply fabric,” McCabe says. “His designs were colorful and stood out from everything else. He created something no one else had.”

CB Sports’ designs, the classic CB jacket with its signature horizontal stripe in particular, gained a cult following on and off the slopes. “The CB jacket was a look that was often imitated, but you had to have the real thing,” Craig Appleman, Vertical Brands’ director of wholesale operations, says. “It captured the imaginations and hearts of an entire generation.” Now, as eighties trends permeate today’s fashion and pop-culture scenes, it’s an opportune time to introduce these beloved designs to a new demographic. The brand will launch with a catalog that brings back the signature colors and designs of the eighties. “Think about navy with a red stripe, or that killer mint green jacket with a navy stripe,” Appleman says. “It’s retro but fresh and serves as an all-purpose jacket, suitable for skiing and après-ski.”

Designs will be familiar: the iconic three-snap pouch pullover, a double-stripe bomber, and the fan-favorite chunky down-blend vest. All of the pieces, however, will be created with modern-day tech (such as EverShield fabric protection, a durable repellent that deflects water and stains) that will carry the pieces forward and cement them as top-of-the-line apparel for a new era.

The Vitality of Vertical Brands

With production for notable brands, including Rossignol and K2, on its résumé (the company produced the majority of Rossignol’s ski jackets in North America for a decade and owned the license for K2 worldwide apparel), Vertical Brands has proven expertise in the industry. The company’s global network of facilities not only offers brand revitalization, as for CB Sports, but also creative partnerships. For example, Vertical Brands also owns Neve Designs—a slopeside fashion staple for more than 30 years—and is facilitating a collaboration with designer Camilla “CK” Bradley. Inspired by her own CB Sports jacket from the eighties, Bradley’s designs bring a special flair to après-ski attire. “I want these pieces to turn heads and also bring people back to another time and place, like CB is doing,” she says. The Neve by CK Bradley line includes colorful, bold, and fun sweaters, ski jackets, and pants, all with nostalgic patterns and designs.

Whether you’re dusting off original CB Sports outerwear, embodying the on-trend retro eighties vibe with a brand-new CB jacket, or winding down a ski day with a cozy Neve by CK Bradley look, one thing’s for sure: Vertical Brands will be taking the ski slopes by storm this season. Today, more than ever, is the right time to bring back classic styles, says Appleman. “Millions of people respect and love CB Sports,” he says. “The United States is ripe for something that captures some fun, and this brand delivers that.”

CB Sports is back! The legend has returned, bringing the effortless, cool vibe of fashion and skiing’s most epic era to the streets and ski slopes of the twenty-first century.

Neve is proud to share the collaboration with women’s fashion designer Camilla Bradley of CK Bradley.

A go to to the Heavens Gate climbing health club in...