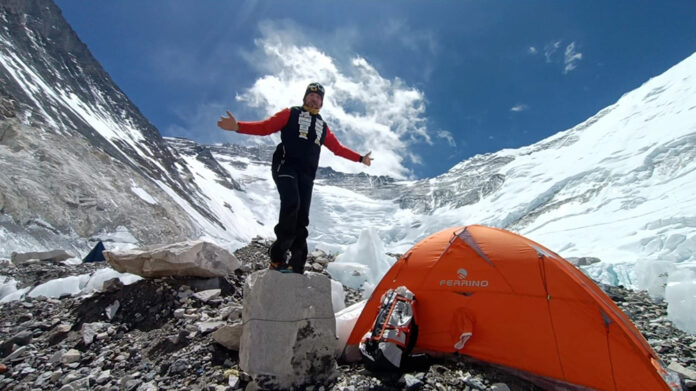 Italian mountaineers Andrea Lanfri and Luca Montanari have completed their acclimatisation process on Everest. After spending a night at Camp 3 at 7200m, they are currently resting in base camp. Lanfri, a paralympic athlete, is hoping to summit after 7 May.

After having climbed Lobuche East, a sixthousander in the Khumbu area, Italian mountaineers Andrea Lanfri and Luca Montanari made various rotations on the lower slopes of Everest in late April in order to allow their bodies to acclimatise to the altitude.

Immediately after setting off from base camp the pair had to tackle the huge Khumbu Icefall, a veritable ice labyrinth comprised of huge crevasses and seracs poised to collapse at any moment. “Good fun, if you go through it only once” Lanfri joked. Fixed ropes, patience and speed are needed to negotiate the most dangerous section of the entire route.

Beyond this they reached the Western Cwm, also referred to as the Valley of Silence. This huge glacial basin is guarded by the Lhotse Face, which leads to the South Col (7900 m), the gateway to the 8848 m summit of Everest. “It was there, right in front of us, at every step we took. The summit seemed so close, we almost thought we could touch it with our hands” explained the former paralympic athlete who in 2015 lost both legs and seven fingers following Fulminant meningococcal septicemia.

Accompanied by mountain guide Montanari, Lanfri reached Camp 3 at 7200m and spent the night there, before descending safely to BC.  The pair are currently resting in base camp and will prepare for the summit push, presumably some time after 7 May.

Outside merchandise made in Iowa, from bug spray to bicycle baggage

Dwelling costs anticipated to proceed climbing in Kalamazoo in 2022

All of the Gear Josh Perry Used to Nab the Self-Supported...