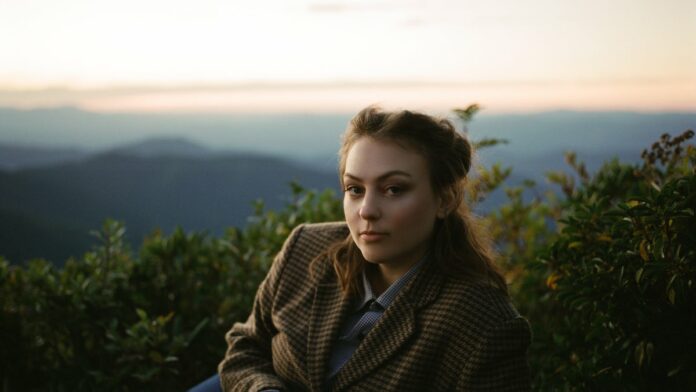 The first time acclaimed indie musician Angel Olsen visited Asheville, North Carolina, was roughly a decade ago, at the end of her first national tour. She was smitten. A city with a small-town feel (it has just under 100,000 residents), Asheville is nestled among the Blue Ridge Mountains and surrounded by rivers and forests, drawing artists and outdoorspeople alike. Locals wanted to chat. They eagerly showed her their favorite watering holes and trails. “I was like, ‘This is real living,’” Olsen recalls. “I just dreamt of it.”

She moved there from Chicago in 2013. Since then, she’s released six records, which include three of her biggest hits, those albums all earning Pitchfork’s coveted “Best New Music” designation: Burn Your Fire for No Witness (2014), My Woman (2016), and All Mirrors (2019). But like so many musicians, she was forced at the onset of the pandemic in early 2020 to cancel her upcoming tour. Without the outlet of live performances and travel, she set about exploring her adoptive hometown and surrounding landscapes. This was a time of some personal turbulence, too: last year, Olsen came out as queer to her friends and family, not long before both of her parents died. “Over the pandemic, it was so healing to say I lived in a spot like Asheville,” she says. “I think I just fell even deeper in love with it all. I was just like, ‘Oh, I’m going to stay here forever.’”

Olsen makes rock music that veers between spare and bombastic, anchored by her bright voice and intimate lyrics. Earlier this year, she released her seventh full-length album, Big Time, a country-inflected record whose writing and feel were informed in part by this period during which she sought refuge outside. The cover—a photo of Olsen silhouetted against hazy mountains—was taken on Max Patch, a bald summit that the Appalachian Trail passes over. “I love just going on aimless drives or going on hikes alone and just being quiet and seeing how small I am and being in nature. It just reminds me that we don’t survive more than this big mountain. It’s bigger than we are. It will be here when we’re gone, you know?”

Over Zoom, while packing her bus for an upcoming tour, Olsen told us about some of her favorite spots in Asheville and the surrounding Blue Ridge Mountains. Not all of them, mind you: “I can’t tell you about the secret spots,” she says. “Because, you know, there’s rules and stuff.”

On a summer day, Olsen likes to grab coffee to go and find a place in a park overlooking the French Broad, a river that winds through Asheville, to write for a while. She recommends Le Bon Café, a coffee truck near her home in the Montford neighborhood, or High Five Coffee—the one on Riverside Drive, which only takes orders to go. And for a “fancy spot,” Olsen enjoys Rowan Coffee, a newer outpost in the center of town that serves thoughtfully sourced brews and a variety of pastries, including inventive waffles—one recent offering, for example, came topped with whipped ricotta, tomatoes, and sunflower seeds.

On a typical night at home, Olsen might order tacos—Taqueria Muñoz, Taco Temple, and Taco Billy all make her list. And she likes La Bodega, a café behind the restaurant Curaté, for its Spanish tortilla. But for some of the best food in town, she says to look no further than Leo’s, a wine bar whose kitchen turns out a range of small, shareable dishes. “The plates are simple and consistent and they have it dialed in,” she says. The owner, Drew Wallace, has opened several Asheville restaurants, including The Admiral and Baby Bull, which Olsen calls a go-to for lobster rolls, cheeseburgers, fries, and milkshakes.

For wine, cocktails, and ambience, Olsen likes Pink Moon, a speakeasy-style bar located behind Double Crown, a classic dive with country karaoke. (Pink Moon posts a password for entry daily on its Instagram stories.) To catch a show, there’s Fleetwood’s—which, in addition to putting on country and punk shows, serves as a wedding chapel and vintage market. And for dancing, there’s Different Wrld. This event and performance venue opened just last year and hosts drag nights and live DJs. According to Olsen, its presence marks a big change in Asheville’s cultural scene. “It’s millennial and Gen Z running the show. It’s queer and BIPOC people running the show, owning the spaces, and having the support,” Olsen says. “We have so much work to do for people being inclusive in the South, but it’s cool to see that my friends are part of this movement.”

Within the metropolitan area are a number of green spaces to stroll or run in—Olsen cites Montford Park, near her home, for one. But for a wilder slice of the mountains that wind through North Carolina, there’s Craggy Gardens, a modest but rewarding hike just off the Blue Ridge Parkway. Most of this mile-long out-and-back is shaded by mossy trees and, in the summer, the purple blooms of rhododendrons. You might pass through a blanket of mist before reaching the summit. “It’s a really rewarding end,” Olsen says. “On the other side, you see the whole view of the mountains.”

Day Trips and Beyond

When she’s heading into the region outside of Asheville, Olsen tends not to research trails and areas ahead of time—instead, she likes to take meandering drives and stop when something catches her attention. “I’m not going to look something up; I’m just going to go get lost,” she says. For example, she follows the sinuous 33-mile stretch of Highway 209 known as The Rattler. “It’s a lot of rolling hills,” she says. “It’s also just really beautiful to drive and park and hike different spots along it.”

Still, Olsen has revisited some places, like the villages of Hot Springs and Trust, excellent hubs for exploring the Pisgah National Forest, which wraps around Asheville. “The Pisgah region is the one I really love,” she says. Olsen frequently hikes up Lover’s Leap, near Hot Springs, whose strenuous uphill culminates in a panoramic view of the French Broad River and the Blue Ridge Mountains; and along the Big Laurel Creek, a popular whitewater rafting spot that feeds into the French Broad.

And with hundreds of waterfalls in the surrounding area (the neighboring town of Brevard has styled itself the “land of waterfalls”), there are plenty of places to cool off after a long outing—many of them with amusingly descriptive names. Olsen enjoys Hickory Nut Falls, which drops 404 feet in Chimney Rock State Park southeast of Asheville; Looking Glass Falls (pair it with a hike up nearby Looking Glass Rock); Bridal Veil Falls in Dupont State Forest; and Sliding Rock, where the water cascades down a 60-foot slab of rock that visitors often use as a water slide. The sheer number of under-the-radar spots in and around Asheville means that everyone has a favorite, uniting the city’s creative and outdoors communities. “In every clique or scene,” Olsen says, “everybody goes into nature in Asheville.”

Psychological Health Is the Identify of the Sport for This Climber

Watts Up in Watopia: Climbing on Zwift