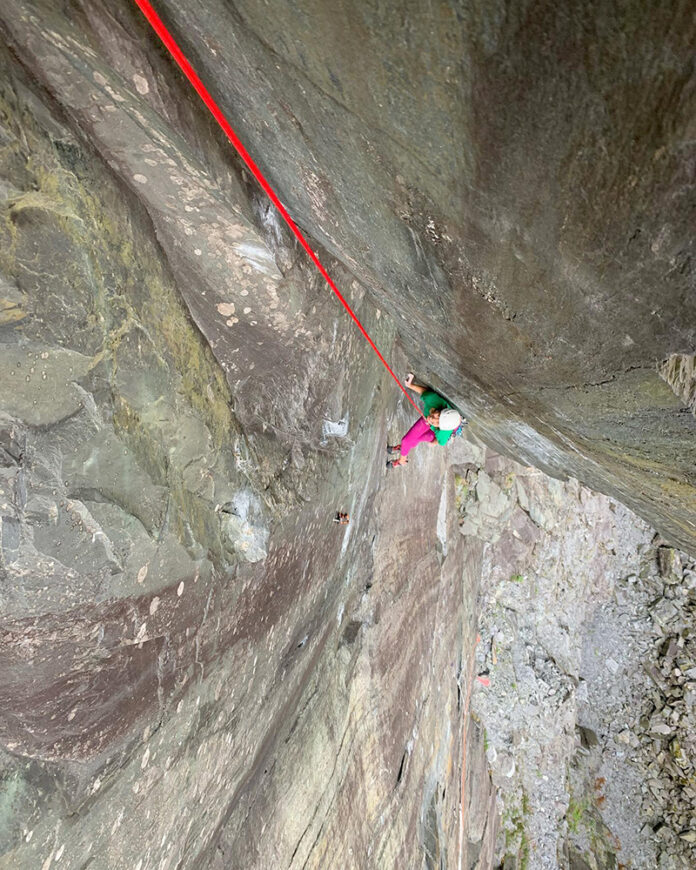 Both Anna Hazlett and Tom Randall have repeated The Quarryman, the Johnny Dawes classic located in the Dinorwig slate quarries above Llanberis in North Wales.

After their heyday in the late 1980’s the slate quarries above the small town of Llanberis in North Wales currently seem to be experiencing renewed interest and one of the most emblematic climbs of all, The Quarryman, has now been repeated by both Anna Hazlett and Tom Randall.

Located in the huge Twll Mawr quarry, the four-pitch outing was first ascended by none other than slate and gritstone master Johnny Dawes in 1986. It provides highly technical climbing up to E8 7a, including the famous Groove pitch immortalised in the cult film Stone Monkey and was described by Dawes himself as follows: “That groove is unique, it requires you to climb very accurately while your body is under a full physical assualt. To succeed, you really need to master both its technicality and physicality. When you add the element of worry to this, then your climbing progresses to a very mature level.”

Hazlett and Randall redpointed each pitch individually before moving on to the next one. Writing to planetmountain.com, Hazlett explained “Tom and I started trying the Quarryman almost immediately when I arrived in the UK two months ago, going for a few weekend adventures here and there. But it was really in this past week that we started piecing everything together. We probably spent around 12 sessions or so on the wall (although we didn’t climb every pitch each session). Tom and I both redpointed each of the 4 pitches in a single push. We were pleased that neither of us took a fall on the duo ascent!”

While Randall’s name is well and truly consolidated in the UK climbing scene, America’s Hazlett is a relative newcomer to British trad and the finer nuances of Welsh slate climbing. She made headline news in October 2021 when she, somewhat remarkably, chose the bold E9 Once Upon a Time in the Southwest as her first trad lead, before backing this up with the first female ascent of the The Walk of Life this June.

Concerning her first slate experience Hazlett, who online goes by the name of Hazelnutt, stated “Climbing on slate and following the footsteps of legends like Dawes is such a privilege! The slate lends itself to technical slabs (my favorite!) and it feels surreal that I get to play on the same lines that some of the strongest climbers in the UK established.”

Hazlett is now only the fourth woman to climb The Quarryman after Caroline Ciavaldini (2018), Hazel Findlay (2020) and Harriet Ridley (2022). The ascent was filmed by Alastair Lee for the upcoming Brit Rock Film Tour.

Get Snow Studies from Ski Areas Worldwide with Gaia GPS

40 Greatest Items for Campers in 2022: Tenting Items for Everybody

The Greatest Out of doors Gear Offers Throughout Amazon Prime Day