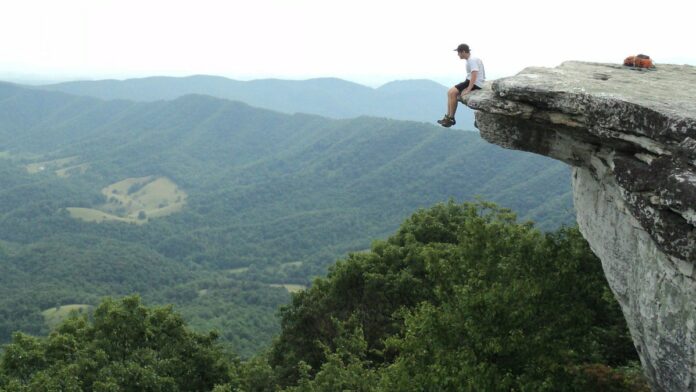 An Appalachian Trail thru-hiker has died this week from injuries sustained in a fall from an iconic lookout in Virginia.

Paul “Grandmaster” Classen, a 23-year-old hiker from the Netherlands, fell 50 feet from 3,197-foot McAfee Knob on Sunday. Rescue crews, including all-terrain vehicles, several police officers, and 30 fire-and-rescue personnel, responded to the incident at 6 a.m. By 7 a.m., emergency workers had reached Classen and begun carrying him to an ATV through steep and rocky terrain.

Classen died later that day of his injuries at the hospital.

While the cause of the fall is still unclear, a Facebook post from Robyn Urdaibay, a member of Classen’s trail family who witnessed the incident, said that it appears Classen “passed out.”

“He was sitting at the edge of the cliffs past McAfee with his feet on a lower rock, not right on the edge, not posing for a photo, and not on the knob itself,” she wrote. “He spontaneously slumped forwards and fell. He was totally well, just chilling eating breakfast. We think he must have passed out, but we don’t know why and will never know for sure.”

Another eyewitness, Matt Johnson, 40, told local media that the incident occurred just as Classen and his group of thru-hikers were smiling and “having a good time.”

Johnson was one of the first to reach Classen at the base of the cliff, and he helped emergency crews attempt a rescue.

“Paul’s trail family really came together and did all that was possible to attempt to save him,” Johnson said. “They kept him still and calm, talked to him the whole time we were waiting on rescue. Everyone there was willing to help.”

Urdaibay, who wrote that she was speaking with permission from Classen’s family, called Classen “the most lively, empathetic, personable, fun and goofy guy you could ever meet.”

McAfee Knob is among the most photographed locations along the Appalachian Trail because of the sharp cliffs that overlook the valley. It’s a tradition for hikers to snap photographs at the edge of the cliffs. According to Urdaibay, however, Classen was neither dangling his legs over the cliff nor posing for a photo.

Brian Clingenpeel, community outreach coordinator of Roanoke County Fire and Rescue, told WDBJ7, “I can’t exactly speak to the cause. We weren’t there when it happened. We just found him at the bottom. When our paramedics got there, they were reporting that he had a stable airway but was in serious condition.”

In 2018, a similar incident took place on McAfee Knob after Greg Marr Sr., a man in his sixties, fell from the cliff’s edge. Marr died of his injuries about a week later.

After the rescue, officials reminded hikers that a fall from the cliff could have devastating consequences and encouraged them to stay clear of the edge. Community members can share photos or stories they have about Classen by sending them to his family at [email protected]

In West Virginia v. EPA, the Supreme Courtroom Will Resolve Whether...