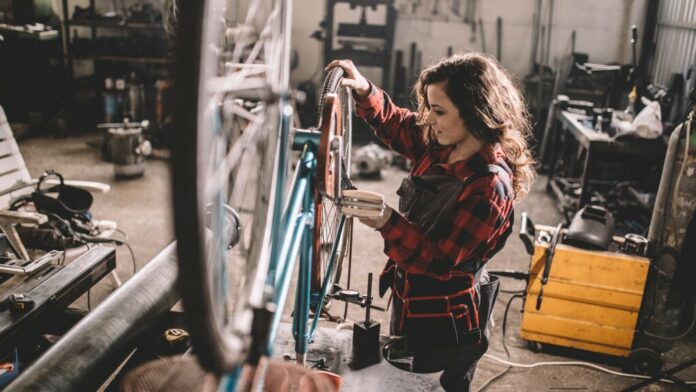 Last spring, I finally dragged my Trek Checkpoint ALR5 out of the garage for a much-needed tuneup. I ride year-round, but it’s often difficult to regularly wash and tune a bike during winter in Colorado. The wear and tear from that neglect was mostly evident in the drivetrain, and after years of use, replacement was in order. Unfortunately, the Shimano Dura-Ace Di2 group that I wanted to install was already on another bike: a Factor Ostro VAM, which was the basis for this story on integration and uses a complicated, fully internal cable routing setup.

Getting the Dura-Ace parts from the Factor to the Trek would not be a simple task. It would involve buying at least $200 in tools and brushing off some rusty skills on hydraulic brake bleeds. And I needed to learn how—or even whether—the Di2 drivetrain’s electronic shift wire could be installed on the Checkpoint, which isn’t configured for full internal routing. The answer was obvious: Unless I wanted to make a substantial commitment of time and money, I would probably need a professional mechanic to do at least some of the work.

As a sometimes gear writer, former bike shop mechanic, and generally handy person who does nearly all of my own bike repair and maintenance, this was a new experience. But it’s one that cyclists are increasingly confronting. The technological advances on bikes today make them better to ride while also making them harder for home mechanics to fix.

Why does that matter? A bike that needs a pro mechanic for repairs costs more to service, for one. And working on your own bike conveys an intimate familiarity that is marked by accessibility and autonomy. As Matthew Crawford writes in Shop Class as Soulcraft, the value of working on your own stuff can’t be reduced to a simple economic “opportunity cost” calculation of time and money. “To fix one’s own car [or bike – Ed.] is not merely to use up time,” he writes. “It is to have a different experience of time, of one’s car, and of oneself.” Cars long ago became complex enough to largely end the era of the “shade-tree mechanic.” If bikes are nearing that same inflection point, what do we lose?

Bike technology has always changed and improved; is it really so radically different now? In a word: Yes. You can split “modern” bikes (ie. since World War II) into two broad time frames. The first begins with Campagnolo’s introduction of the first drop parallelogram rear derailleur (1951’s Gran Sport) and ends at about the turn of the century. During this time frame, bike technology, and the mechanical skills and tools needed to service it, stayed relatively static. Sure, there were innovations like indexed shifting, integrated shifter/brake levers, and more powerful brakes; but drivetrains were mechanically operated by steel shift cables brakes still used the simple technology of rubber pads on metal rims, and bottom brackets were (with rare exceptions) threaded. I recently tuned up a neighbor’s 1987 Trek 560 Pro Series road bike and was struck by the raw simplicity of the technology. Foundational repair and maintenance skills learned in 1955 would have served you pretty well even in 1995.

The second era of modern bikes spans roughly from the turn of the century to today. We’ve seen far greater changes in these 20-odd years than the 50 before them: hydraulic disc brakes, increasingly sophisticated suspension, electronic shifting, a proliferation of press-fit bottom bracket designs, cartridge bearings and, design integration (think internal cable routing and proprietary cockpit and fork/headset/stem assemblies.) That’s not to mention the entire category of e-bikes with lithium batteries and light electric motors. To work on bikes today, a mechanic needs skills in electrical diagnostics and hydraulic systems, along with a slew of new tools like bleed kits and bearing presses with an expansive array of drifts.

I don’t mean to romanticize the old days. Few tools are more specialized (or fetishized) than the wood-boxed complete Campagnolo set, versions of which still sell for thousands on eBay. And some repair jobs have always been tricky for even professional mechanics—like having to “face and chase” a frame’s bottom bracket shell, which could ruin a customer’s bike if done improperly.

In fact, some maintenance today is actually easier. Once electronic derailleurs are bolted to the frame and plugged in to power, you can do most of the tuning with just the shifter paddles in adjustment mode—no tools needed. And reference resources are now downloadable service manuals with part-specific, step-by-step YouTube videos for almost any repair (instead of the old hardcopy maintenance manuals and diagrams).

But generally, bikes today are more complex. The poster child for this shift is integration. Some aspects of integration have a meaningful impact on ride experience.  Others—like full internal cable routing—seem to exist primarily for aesthetics. And they can all make working on bikes a pain in the ass.

Don’t just take my word for it. When I took the Factor and Trek to Vecchio’s in Boulder, shop owner Jim said that it was going to be a lot easier to get the brakes off the internally-routed Factor and onto the Trek (with its downtube-only internal routing) than the other way around. I asked him how integration had changed his work. “Stem swaps,” he said instantly. “Used to be if someone wanted a longer or shorter stem I’d say, ‘Do you have five minutes?’ and do the labor for free.” With some internally routed bikes, that’s now a multi-hour job that can cost $300 or more just for labor. Thankfully, manufacturers are responding with new routing designs that are more mechanic friendly. But older versions are sometimes so absurdly complex that a stem swap might mean you need to pull your crankset and bottom bracket. Jim said one recent bike build was so frustrating that he—a master mechanic with over three decades of experience—more than once had to physically walk away for a few moments.

Aside from making repairs  exponentially harder for little or no real benefit, the inexorable spread of electronic gear on bikes raises a related question about “right to repair,” with which  industries as diverse as farm equipment and consumer electronics are now wrestling. Increasingly, brands like SRAM are running diagnostics and maintenance of their electronic drivetrains through apps. Many e-bike motors are similarly serviced. This means brands have to support their product over its conceivable lifetime—not just with spare parts, but with code. If our right to use, repair, and modify hardware depends on a software license, what exactly do we own?

Decreasing autonomy over bike repair may not be a negative for all riders. I know that not not everyone enjoys working on their bikes. There’s also the  opportunity cost of doing all your own bike maintenance. Every minute spent wrenching is a minute not spent riding, and since we own bikes to ride them, doesn’t it make sense to offload the mechanical stuff to someone else? Taking your bike to a shop also means supporting local businesses that have been hard-hit with the move to direct-to-consumer sales.

But I still think we’re all losing something—because I find immense value in working on my own gear. As bikes change, it’s even more important for me to learn how they work in order to retain some basic roadside and trailside autonomy. I’m not worried about forgetting how to change a flat tire, but keeping up with changes like tubeless, tire inserts, and other innovations is what will keep me rolling, not walking, home.

Plus, a better understanding of a bike’s mechanical nature can mean a better riding experience. In his new book The Art of Cycling, philosopher and ex-pro  James Hibbard writes, “Just as the skilled musician becomes aware of aspects of their instrument which would be imperceptible to anyone else, the cyclist comes to understand on a preconscious, neuromuscular level, the sensations particular to their bike as they navigate a technical descent or thread their way through a field of riders.” Only once you understand why and how a bike rides like it does can you adjust or modify it to better respond to your preferences.

But the benefits of home bike maintenance go far beyond the bikes themselves. I’m a pretty big fan of the idea that manual work has inherent practical value. As a kid, I was mechanically inept. The first time I tried to change a flat rear tire, the whole system seemed so foreign to me that I thought you needed to remove the chain to get the wheel out of the frame (you do not). Working on bikes has taught me more than specific maintenance skills. It taught me to see that the mechanical, physical world has a kind of rules-based order to it. If you examine anything with a curious eye, you can learn how it works, how to operate it, how to diagnose what’s wrong and fix it (or build it to begin with). And it’s an  outlet—a meditation of sorts—that allows my brain to wander and ultimately refocus, while my hands stay busy.

When it comes to maintenance on modern, high-tech bikes, I have two rules of thumb. First:  If a repair involves an expensive tool I’ll use once a year or less, just take it to the shop. Second, from ex-pro Phil Gaimon: Try any repair once with a glass of whiskey. If the repair takes longer than it does for you to sip the whiskey  (and if the calming effects of the whiskey are negated by the stress of the repair), then take it to a shop. Keeping both of these in mind, I had Jim swap the brakes on my Trek.

But the  drivetrain was a perfect challenge: novel, yet seemingly accessible. So I found myself stringing Shimano e-Tube shifter wire through holes on the Checkpoint’s bottom bracket shell that are not designed for cable routing. Then I  used a heat gun to reinforce the shifter wire at the exits with shrink-wrap tubing. In the end, the bike rides beautifully, I learned a ton, and I’m proud of my problem-solving. When it’s time for a brake bleed, I’ll probably buy one or two new tools because I want to improve my proficiency.

That Boulder bike shop, Vecchio’s, is named after an Italian term meaning “old man” or “old way.” Sometimes, working on bikes to the degree that I do, I feel a resemblance. When I asked on Twitter if riders were doing less than or the same amount of their own maintenance and repair than the past, many said less, citing increasing complexity and hesitancy about their skills, tools cost, and time. But some still do most of their own work, and that’s where I’m at too. I recognize that there are always going to be jobs past my abilities and interest (like suspension overhauls or, if I get an e-cargo bike, motor service). Those, I’ll happily take to a shop. For the rest, maybe vecchio has a third meaning: that continuing to work on bikes is my way, as integral to my connection with the sport as riding them.

County looking for volunteers to construct, keep out of doors rinks

There Are Conga Strains and Large Crowds on K2 Now