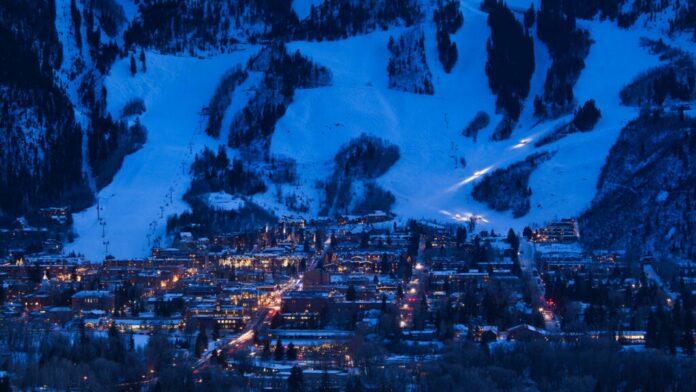 Aspen, Colorado, is one of those fabled places—like Banff or Chamonix or Kitzbühel—that everyone wants to see, if only once. In Aspen, the draws include cascading white snow above a jewel-like town; the early ski history; the melding of mountain sports and culture; the music festival and the writers’ conference and the Aspen Institute. And the musicians and movie stars, though we’re not sure even they can afford it there anymore.

I remember seeing a guy on a cross-country ski trail who I smiled at, out of habit (he smiled back—it was a beautiful day), and then stared at, thinking, Did we go to high school together? Then realizing it was Wyatt Earp, I mean Kurt Russell. As a longtime local who now lives downvalley, I always enjoyed seeing the glitterati. Martina Navratilova on a panel of women in sports, and she was honest and great. Peter Dinklage at the airport. Kate Hudson hanging around. Even John Denver, long ago. I’m afraid I would not recognize the Kardashians, though, even if I sat in the gondie with them.

Now you, too, can be part of the fabulousness. The Aspen Ski Company recently did something it has never done before: it’s asking for public input to help name the trails on Aspen Mountain (aka Ajax), which will be home to a new 153-acre area called Pandora, with all terrain above 10,000 feet, opening in time for the 2023-2024 season.

The solicitation, shared by the Aspen Daily News, asks that you “submit one or more suggestions that fall in the category of local people, local history, mining history, notable terrain, or Greek mythology.”

Greek mythology? Hey, I saw Jason and the Argonauts once. Let’s do this.

Zeus Chute, which would be side by side with the Hera Highway

Odysseus Off-Piste (he certainly went off now and then)

Prometheus Out of Bounds

Base Metal (base restaurant)

Sheriff’s Way (for Bob Braudis, the long-haired, six-term sheriff who once approached a hostage taker unarmed, leading to a peaceful outcome that remains a case study for law-enforcement professionals)

Skiing at 100 (this one honors the centenarian Klaus Obermeyer)

Andy Mill Hill (for an Olympian, one of a long list of ’em around Aspen, who can be seen returning his cart to the grocery store like anyone else)

The Cher Chair (chairlift; Cher once had a “log cabin”/chalet in Aspen)

Rocky Mountain High Traverse (for who else but …)

That is where you think of Hunter S. Thompson, high rollers, flashy parties, and excess—all of it, of course, amid the backdrop of mountains and great skiing. The steep and deep. So …

One of the most fun things I ever did in Aspen was attend a ski-club screening of a modern movie classic. Before the show, which took place in the Wheeler Opera House (est. 1889), anyone present who had been involved—say, as an extra in the hilarious ski-school hiring scene—was asked to stand up. A dozen people did.

So let’s finish with, of course:

Journey Council seeks host at the moment for out of doors...

Tourism took main blow in 2020, however the outside saved it...