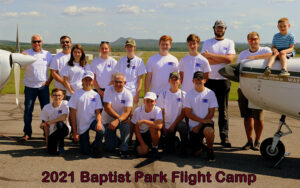 In 1935 the school was officially incorporated. A few years later, the school’s working name was changed to Baptist Park. New Baptist Park Director, Erin Ackerson, understands the goal of Baptist Park’s camping programs to create a camping atmosphere that promotes fun, spiritual learning and adventure through an outdoor camping experience.”

Ackerson knows that over those many years, thousands of overnight and day campers have enjoyed the traditional experiences of archery, bicycling, team sports, hiking trails, high and low ropes courses, canoeing, rock climbing, camping under the stars, and campfires. Ackerson experienced Baptist Park when she was young and wants to continue to emphasize the development of leadership and communication skills for the older campers, while younger campers will continue to learn to be independent while learning the value of teamwork.

To keep up with changing times, Baptist Park has developed new and different camping experiences for participating campers. In addition to general outdoor skills camps, special camps such as the Theater Arts Camp, the Digital Arts Camp and the Flight Camp have been developed and held in recent years.

The most unique camping experience of these camps is Baptist Park’s Flight Camp. For the past 75 years, missionaries around the world have been supported through the work of mission pilots. Building on this theme, campers are introduced to the basics of flying and airborne and ground based aviation professions.

The most popular activity at Baptist Park is the indoor pool, which has undergone a major renovation and upgrade for the 2022 camping season. (Contributed photo)

Pastor Jim Ackerson and Wayne Kilcollins have run this camp together for the past 10 years. Pastor Ackerson points out that the Flight Camp seeks to inspire teenagers into careers in mission aviation and the airline industry through a unique mentoring curriculum and camp program. Flight Camp is one of two week-long residential camps hosted by Baptist Park. Located in Mapleton, Baptist Park hosted five-week camping sessions, but due to the COVID-19 pandemic, the summer program includes three overnight camping sessions – Flight Camp for 14-18 year olds (July 3-8), Outdoor Adventure Camp for 13 – 18 Year Olds (July 3-8) and their Maxed Out Adventure Camp for 11-14 year olds (July 17-22) is a residential summer camp in Mapleton. At the Flight Camp, campers are introduced to aviation in general and mission aviation in particular. As in previous years, there will be flight options (weather permitting) for all campers. In the past, campers were given the opportunity to learn to fly drones as a teaching method that allowed campers to learn the basic principles of actual airplane flight.

For the Outdoor Adventure Campers, Maxed Out Adventure Campers, and the Day Campers, campers will be involved in traditional camping experiences and activities. New experiences are added to activities at Baptist Park each year. Among the many new activities of the past, zip line and rock wall climbing have become the most exciting and fun activities that all campers find very exciting. But campers agree that the heated indoor pool is the best activity of the day.

Baptist Park offers day camping experiences for young campers. Puddle Jumpers Day Camp (ages 4-7) was an exciting and much appreciated camp for young children. Mountain Climbers Camp (ages 7-10) has been converted to a day camp due to COVID-19 concerns. Both camps take place on different days during the July camping season at Baptist Park. See the camping plan for information https://www.facebook.com/baptistparkmapleton. For information on camping sessions, contact Baptist Park at 207-764-1832. For people interested in Flight Camp, contact and/or registration can be made at: http://baptistpark.net/flight/.

Baptist Park of Mapleton has scheduled its annual Flight Camp for July 3-8. Since 2008, Baptist Park has been introducing young people to the basics of flying and the work of mission pilots around the world. Pictured are the 2021 Flight Camp campers and the two aircraft used for flights at last year’s camp. (Contributed photo)

This Saturday, May 28, free flights for youth ages 8-17 will be offered by the Northern Maine Flying Club and EAA Chapter 736 from 10:00 a.m. to 3:00 p.m. at no cost to the family. They will be offering these free flights on a first come, first served basis. There will also be flight displays, games, food vendors and prizes for all who take part.

If you’re interested in taking your son or daughter to the airport for a free flight but have questions, you can contact the Northern Maine Flying Club on Facebook. There will also be registration information for Baptist Park’s (unique) Flight Camp.

The Mapleton Lions Club wants everyone to know that the club is continuing with its annual Memorial Day Parade and Remembrance Day Ceremony. Dave Chaney will be the Grand Marshal of the Mapleton Memorial Day Parade. The Mapleton Lions Club hopes this will be one of the largest parades in several years. Organizations, businesses and individuals are encouraged to come and participate in the parade. The parade takes place on Dudley Road at 1:30pm and ends at 2:00pm. The memorial ceremony will be held 15 minutes after the parade ends at the Veterans Memorial at Mapleton Elementary School.

Terry Sandusky is the Star Herald correspondent for Mapleton, Chapman and Castle Hill and can be reached at 764-4916 or [email protected].

Inside The Name: Newell Manufacturers Sees Momentum Towards Out of doors...