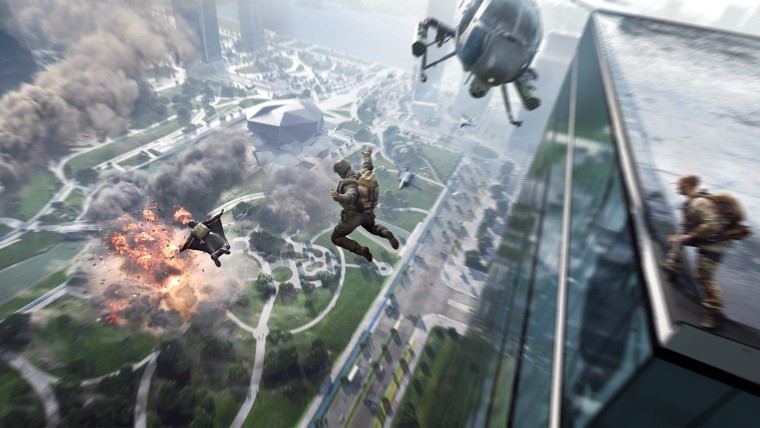 Today EA published new details on the specialists in Battlefield 2042. Specialists are unique soldiers who will grant you various abilities ranging from deployable cover to healing squadmates in the upcoming first-person shooter. Although there will be ten Specialists in the game at launch, only four were revealed today. You can read about them below.

Although it sounds a bit ridiculous, Maria Falck fires a syringe at friendly soldiers to heal them. However, when she fires the same syringe at enemies, she deals damage. As Falck, when you revive a teammate, you can restore them to full health even if they are down.

Maria Falck, an experienced support, has a strong will that cannot be shaken by danger, fear, or reputation. A seasoned medic, she served in the German Armed Forces for six years and traveled across North Africa and the Middle East in an effort to make a positive impact on the world. Now she’s searching for her missing son David after hearing he may have joined a no-pat group.

Kimble Graves allows you to deploy cover that protects against bullets and explosives. You can also summon a robot-like device that shoots explosive projectiles.

A born leader, Kimble ‘Irish’ Graves is the commander of the Specialists aboard the Exodus. A native of Brooklyn, New York uses his natural leadership and fighting skills to help keep the aliens out of harm’s way. A former Marine who has seen the costs of war firsthand, this seasoned engineer is dedicated to protecting both his squad and those who cannot fight for themselves. Irish excels at fortifying positions on the battlefield and creating small outposts that others can use as a rallying point for an attack.

Pyotr Guskovsky has deployable sentry guns that automatically lock on and attack nearby enemies. Playing as Boris means you may be able to spot missed enemies if they get too close.

Self-motivated and self-actualizing, Boris seeks power and control in a chaotic world. While his leadership skills may be a bit aggressive to some, there’s no denying his skills in this area. This Russian-born engineer is a highly experienced weapons expert on the task force, particularly when it comes to defensive tactics, although his true connection to the team is suspect. Still, Boris is credited with getting the job done, albeit with maximum collateral damage.

Webster Mackay has a grappling hook that allows you to be more agile than other players. You also get a speed boost when aiming down the sight.

outdoorsman. Nomad. Soldier. Mackay is an ass kicker with a conscience. Mackay followed in his father’s footsteps and joined the Canadian military as a teenager. At the peak of his military career, he was a member of Joint Task Force 2 as part of an anti-terrorist unit. After retiring from the military, he followed his dreams of exploring and living off the grid. Now this Assault Soldier is fighting for the Non-Patriated to redeem a regret from his military days.

Battlefield 2042 was scheduled for release on October 22nd on Xbox One, Xbox Series X|S, PlayStation 4, PlayStation 5 and PC. You can pre-order it now on the Microsoft store or the platform of your choice. Last-gen console versions are $59.99, while current-gen versions start at $69.99. The price increase now seems to have been adopted by many publishers. Lucky if you are one EA Play or Xbox Game Pass Ultimate subscriberget 10% off all EA titles including Battlefield 2042.

Are you looking forward to Battlefield 2042? What do you think of the specialists? Who is your favorite so far? Let us know in the comments below.

This Gravel Bike Turned a Mountain Biker Right into a Roadie

Good Friday however the humidity begins climbing this weekend

Sporting items retailer so massive it has a Ferris Wheel inside...