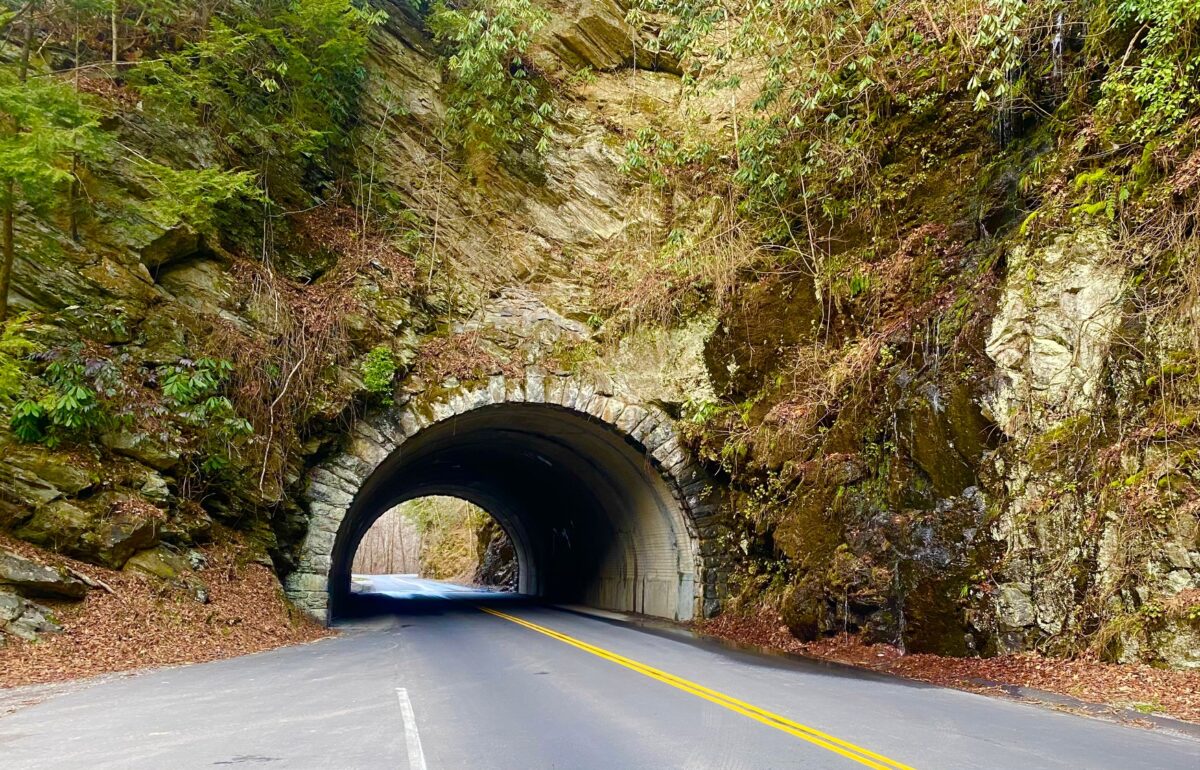 About to pass through a mountain tunnel on a winter Sunday on the way to Cades Cove, Great Smoky Mountains National Park: Glynn Wilson

ANALYSIS – If you are a long-time nature lover who understands the environmental, biological, economic, psychological and sociological needs to protect and expand green spaces across the country, or a new convert who discovered national and state parks as a way to escape your house during Covid, you may want to consider this as you begin to think about what you are going to do on November 8 when you go to your local polling place to vote.

Are we going to let the Trump anti-science crowd take back the House and Senate in November and the White House in 2024? Would that not be the ultimate planet-killing disaster ever, surely dooming any effort to tackle climate change due to global warming from the burning of fossil fuels for energy and transportation? Would that not be a major setback for any future for the survival of American democracy?

It is understandable that many environmentalists and progressive political activists are not totally happy with the final Inflation Reduction Act, which was passed only with concessions to West Virginia and the fossil fuel industries thanks to corrupt Senator Joe Manchin.

But let me remind readers that sometimes to move forward in this world, not back, saving democracy requires compromises. Even Abraham Lincoln had to buy a few votes in Congress to pass the Thirteenth Amendment to the Constitution to end slavery for all time and bring about the end of the Civil War.

Related: Abraham Lincoln: An Important Story for All Time

Yes, all these new programs funded by the Biden administration will take time to implement and for people to see the results. But one result is already clear. While Trump filled his cabinet with anti-science, anti-environment industry tools, much progress is already being made by restoring the Environmental Protection Agency to its mission.

Now, as part of the the so-called America the Beautiful Initiative, the Biden administration is launching a major interagency effort, called the Federal Interagency Council on Outdoor Recreation (FICOR), that will work to create more safe, affordable and equitable opportunities for Americans to get outdoors, and in the process, prepare the country for the coming impacts of climate change.

The FICOR – which includes leaders from the Departments of the Interior, Agriculture, Commerce, and Defense – will focus on improving access to nature, expanding outdoor recreation opportunities, and providing the public with improved and more affordable experiences on America’s public lands and waters.

“We applaud the Biden administration for taking bold steps to save 30 percent of lands and waters in the United States by 2030,” said Dan Ritzman, Director of Lands, Water and Wildlife for the Sierra Club. “The good news is that communities across the country are already working to protect everything from wilderness to local parks. Strong partnerships and an expanded vision of what it means to protect nature will help us reach the 30 percent target, expand equitable access to the outdoors, and fight the climate crisis.”

Increasing access to outdoor recreation is one of the six areas of focus outlined in President Biden’s America the Beautiful Initiative.

Working together, the agencies will coordinate policies across the federal government, facilitate partnerships with private industry, and improve implementation on a host of issues gutted and ignored by the previous administration.

With funding from the new Infrastructure Bill, the American the Beautiful Initiative and the Inflation Reduction Act, the federal government is now focused on investing in “resilient” systems to facilitate outdoor recreation.

At the top of the list is greatly expanding the system of electric vehicle charging stations across the country to accommodate the growing fleet of electric vehicles that will be needed to transition the population away from gas guzzling, pollution spewing cars and trucks. The private sector is already moving in this direction, with most automobile manufacturing companies now looking to move away from gas powered cars to develop the electric cars and trucks for the future.

The law just signed by President Biden contains major tax and spending provisions to speed this transition for companies and consumers.

The government-wide effort also contains major funding for more and better hiking and biking trails and new and improved campgrounds, along with new and improved visitor centers, boat docks and other means of access to the nation’s public parks and waterways.

Of course this drive to get more people involved in gaining the benefits of spending time outdoors will require more spending on educating the expanding work force and career opportunities in conservation, outdoor recreation, habitat restoration and resource management work, and providing comprehensive visitor information for the hunting, fishing, hiking, biking, birding, climbing and boating communities.

It will require more cooperation with state, local and tribal governments, especially in communities bordering federal lands and waters.

This launch of the FICOR idea renews and re-energizes a body that was originally created in 2011 by the Obama administration, but was suspended by the Trump administration. Prior to being suspended, the FICOR successfully launched recreation.gov to make online reservations more uniform and available across the country, and helped the Bureau of Economic Analysis begin tracking outdoor recreation as a major sector of the economy, for example. It also established the Every Kid Outdoors Pass.

Outdoor recreation was continuing to grow rapidly as an economic sector even before Covid hit. The data now shows that it contributes nearly 2 percent to the national Gross Domestic Product, and generates at least $375 billion in economic output.

With America’s parks and public lands experiencing record-level visitation, the Biden administration is taking unprecedented steps to expand equitable access to the outdoors and to protect natural, cultural, and historic resources on a massive scale.

In addition to launching the FICOR, the Administration has launched historic investments through the Bipartisan Infrastructure Law in the restoration of federal lands and waters, improving availability of and equitable access to all kinds of outdoor recreation opportunities.

Over the next five years, NOAA’s targeted investments in habitat restoration, coastal resilience and climate data and services will advance ongoing federal efforts toward building this national resilience to climate change.

The program also established the America the Beautiful Challenge, a $1 billion public-private competitive grant program which funds locally led, voluntary conservation and restoration activities, including the development of outdoor recreation access and workforce development. The first round of grants – totaling $85 million – will be released in November 2022.

The Interior Department announced more than $61 million in grant funding to communities in 26 cities to create new parks and trails, or substantial renovations to existing parks, through the Outdoor Recreation Legacy Partnership program. Established in 2014 and supported by the Land and Water Conservation Fund, it enables urban communities to create new outdoor recreation spaces, reinvigorate existing parks, and form connections between people and the outdoors in economically underserved communities.

As the largest Federal provider of water-based outdoor recreation in America, the U.S. Army Corps of Engineers is investing $120 million from the Bipartisan Infrastructure Law and the Disaster Relief Supplemental Appropriations Act of 2022 to improve recreation facilities across the country.

The U.S. Department of the Interior expanded hunting and fishing access on 2.1 million acres of National Wildlife Refuge System lands and waters in 2021, the largest expansion of outdoor recreation opportunities in recent history.

The department is continuing to explore opportunities to provide additional access to refuge system lands. Hunting, fishing, and other outdoor activities contributed more than $156 billion in economic activity in communities across the United States in 2016, according to the Service’s National Survey of Fishing, Hunting, and Wildlife-Associated Recreation, published every five years. More than 101 million Americans — 40 percent of the U.S. population age 16 and older — pursue wildlife-related recreation, including hunting and fishing.

The program also focused on acquisitions and improvements of federal lands and waters under the Great American Outdoors Act of 2020, which passed with overwhelming bipartisan support.

The U.S. Department of Agriculture announced more than $503 million in funding for National Forests and Grasslands. The funds will go to projects to address deferred maintenance and improve campgrounds, trails, and facilities in National Forests. Funds will also be spent on land acquisition to expand recreation opportunities for visitors and strengthen resource protection partnerships with state agencies and private organizations.

The Department of the Interior announced $279 million to support federal lands and waters and expand outdoor recreation access utilizing the Land and Water Conservation Fund to all 50 states, U.S. territories, and the District of Columbia for state-identified outdoor recreation and resource protection projects.

The program is also focused on expandeding outdoor recreation opportunities by protecting areas for future generations through its mission and philosophy of conservation.

She also announced the establishment of the Lost Trail Conservation Area in Northwest Montana as the 568th and newest unit of the National Wildlife Refuge System, managed by the U.S. Fish and Wildlife Service. This expansion – the first new unit in the Refuge System for the administration – is the culmination of a 20-year, locally-led effort to conserve important big game corridors and recreational areas in the region. The service worked in partnership with the Trust for Public Land and the Confederated Salish and Kootenai Tribes to purchase the 38,052-acre conservation easement from its continuing owner, Southern Pine Plantations.

The Bureau of Land Management, the U.S Department of Agriculture’s Forest Service, and the five Tribes of the Bears Ears Commission formalized their partnership for co-management of the Bears Ears National Monument, established by President Obama but abandoned by Trump. The Hopi Tribe, Navajo Nation, Ute Mountain Ute Tribe, Ute Indian Tribe of the Uintah and Ouray Reservation, and the Pueblo of Zuni will be joint managers of the National Monument and will receive resources from federal agencies to participate in and take leadership on the management of their ancestral lands.

The USDA Forest Service and the Bureau of Land Management are considering a 20-year withdrawal of 225,000 acres of U.S. Forest System lands in Minnesota to protect the Boundary Waters Canoe Area Wilderness – the most visited wilderness area in the country.

The program also created workforce development opportunities with the establishment of an Indian Youth Service Corps Program, which will provide meaningful education, employment and training opportunities to Indigenous youth through conservation projects on federal and Indian lands – putting young people on a path to good-paying jobs all while helping to address the climate crisis.

So consider this in deciding what you vote for in November. The programs may not be perfect and accomplish everything you would like to see. But these programs put the national priority and the money behind an effort to preserve and protect this country’s natural environment for future generations.

What people are saying about the “America the Beautiful” Initiative

If you support truth in reporting with no paywall, and fearless writing with no popup ads or sponsored content, consider making a contribution today with GoFundMe or Patreon or PayPal.

It’s Time to Rethink What Skiers Suppose Is Cool