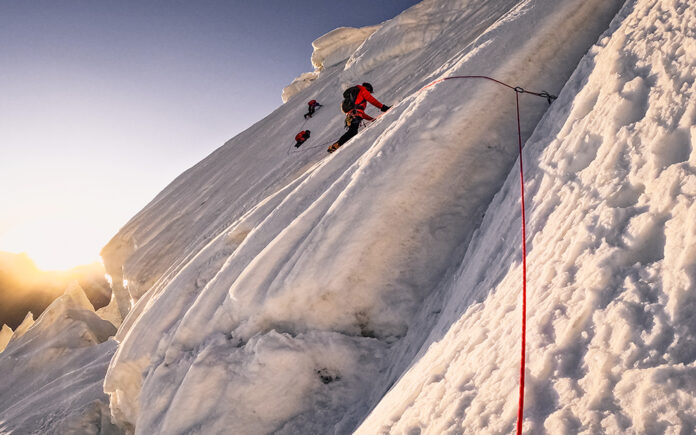 The Nangma and Bondit Expedition 2022 of the Hungarian National Alpine Team aimed to make first ascents in the remote and partly unexplored region of the Hushe and Nangma Valleys in Pakistan. The expedition was funded by the Hungarian Mountaineering and Sport Climbing Federation. The four members, Dr. Laszlo Szasz, Bence Kerekes, Marton Nagy and Dr. Viktor Agoston, arrived in Pakistan on the 25th of June and reached K6 basecamp at an altitude of circa 4000 meters on the 28th.

Acclimatization: First ascent of an unnamed peak
After checking their options based on conditions and the prevailing weather, three climbers of the team –  Laszlo Szasz, Bence Kerekes and Viktor Agoston – made their first acclimatisation climb, which was the first ascent of an unnamed peak close to Green Tower. They reached its summit on the 2nd of July with one bivouac at 4800 meters. According to their GPS-based measurement the summit is 5412 m high (based on Garmin InReach data). They climbed the mountain’s northeast face, with difficulties estimated at 600m+, 50°, 5c rock (3 pitches), D (difficile). They named their route “Hungarian Dances”, and suggested the summit be named Amanat Brak. The crew then attempted an unnamed ridge on the north side of Nangma Valley. After climbing 12 pitches past difficulties up to 6c+ (6b A1), they were forced to retreat in a rainstorm.

Main objective: First ascent of Bondit Peak
After making an acclimatisation trip to K6’s advanced base camp at 5300m the team returned to Khande (Kanday) at 2900m. Between the 5th and 17th the weather was generally bad and changeable, and did not allow for more serious objectives. From the 17th though a good weather window appeared and the climbers decided to try hitherto unclimbed Bondit Peak. According to the maps the summit is 5780m high, the real altitude was unknown however since nobody had ever stood on its summit. In the past few years climbers from Ireland, New Zealand and Japan had attempted to climb this mountain but failed. The last attempt was just a month ago.

All four climbers left Khanday on the 17th. They climbed autonomously, not even taking a cook to their planned camp below the mountain. True to their preferred style of climbing, everything they needed was carried in their own backpacks.
On the first day they established camp at 4100 meters. On the 18th they moved up to C1 at 5100 meters on the Bondit glacier. On the third day they pushed up to C2 at 5500 meters. From this camp they set out for the summit push and reached the summit in beautiful but hot weather at 12:45 PM on the 20th of July. Here they had to wait 4 hours before starting the descent, until conditions got safer when the snow froze again. They reached their tent at 5500 meters at 02:00 AM, after 23:00 hours of climbing. After some rest they descended to Camp 1 on the 21st, via a different route than the one used for the ascent because snow conditions worsened on the glacier. The next day they returned to Khanday.

According to the Hungarian team’s GPS measurement, the summit of Bondit Peak is 5980 meters high, which they reached via the northeast ridge. The difficulties are 1500m, 80°, WI 4, TD (tres difficile). It is a climb mainly on snow and ice. The approach on the heavily crevassed  glacier is not without hazards, and makes route finding difficult. The seracs of the hanging glacier on the mountain present avalanche danger. It takes some commitment to climb this route.

Locals welcomed the team with great joy, some even got emotional. Bondit Peak means a lot to them and they were happy to finally see a team succeed. It was also a dream come true for the climbers themselves. Although all of them are experienced, it was their first trip to the Karakorum. But surely not the last.

The Hungarian National Alpine Team was founded by the Hungarian Mountaineering and Sport Climbing Federation with the aim of performing alpine ascents at a high international professional level. It also aims to support and educate young alpinists to develop their mountaineering skills. The team’s first big project was a winter attempt on the Shkhara’s South Face in the Caucasus Mountains in 2020.

Backyarding Tendencies in 2022: TurfMutt Basis Predicts People Will Proceed to...

Alex Honnold and Kilian Jornet on Climbing and Skimo within the...

Man lacking on BC Inside tenting journey could also be in...

A COVID Outbreak Is Plaguing Climbers on Everest