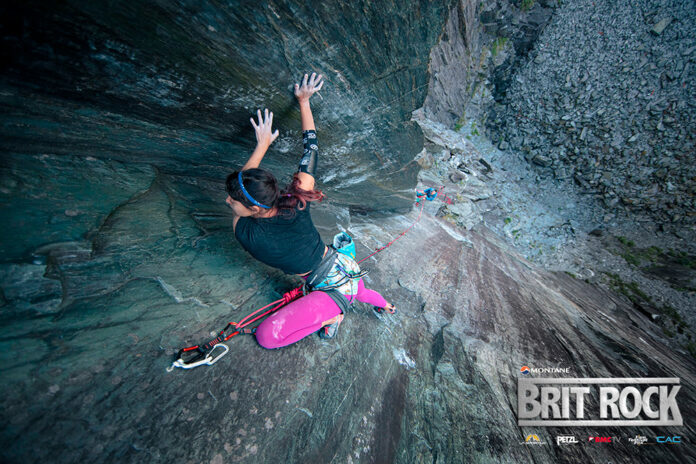 The 2022 Brit Rock Film Tour is currently taking place in the UK and also, everywhere else, streaming worldwide until the 6th November. The program contains three films presenting remarkable climbs from Quarryman in North Wales and Sanderson’s Hope in Greenland to a multi-climb project undertaken during the Scottish winter. The films document the exploits of some of the greatest and most popular climbers on the current scene, including Anna Hazelnutt, Tom Randall, Guy Robertson, Greg Boswell, Jacob Cook, Bronwyn Hodgins, Angela Vanwiemeersch, Kelsey Watts, and Zach Goldberg-Poch.

2022 PROGRAM
Queen Lines
When US climber Anna Hazelnutt visits the UK and teams up with Tom Randall, sparks fly off the crag both in terms of climbing feats and the volume of fun thrown into each day. Entertaining and compelling, Anna has only been trad climbing for 12 months. Under Tom’s stewardship, they set themselves the challenge of a one-day ascent of the coveted Quarryman in North Wales and the first female repeat of the notorious Walk of Life at Dyers Lookout in Devon. 35 minutes

Ephemeral – a Scottish winter climbing story.
Follow top climbers Guy Robertson and Greg Boswell in their quest to seek out and conquer new lines. With the 2021/2022 Scottish winter season being among the hardest and strangest of recent times, the resulting formations have acquired an almost mythical status. Taking advantage of those conditions, Greg and Guy make first ascents of some truly extraordinary features in some of the most impressive climbing arenas; An Teallach, Glen Coe, Ben Nevis, Craig Meagaidh, and the Cairngorms. Accompanying the in-depth story and gripping action are interviews with Simon Richardson and Helen Rennard. The expert analysis delves into the rich climbing history, reflects on recent losses and gives the world stage context of what makes the Scottish winter so special. 55 minutes

Thousands and thousands movement into recreation, parks areas throughout area >...