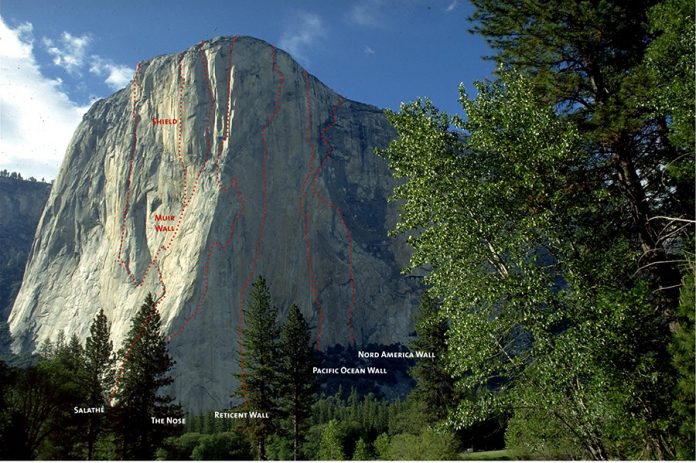 American rock climber Brittany Goris has made a rare free ascent of the Salathé Wall on El Capitan.

Brittany Goris has taken her climbing a quantum leap forward with her 5-day free ascent of the Salathé Wall on El Capitan. First climbed 60 years ago by Royal Robbins, Chuck Pratt, Tom Frost in a ground-breaking and uncompromising style (read fixed ropes only on the lower third before launching into the unknown and only 13 expansion bolts) over a period of nine and a half days in November 1961, the most logical line was freed in 1988 by Todd Skinner and Paul Piana who swung leads over a period of nine days.

In June 1995 Alexander Huber became the first to lead all pitches free, while Steph Davis became the first woman to climb this monumental line in 2005. Further female free ascents include Mayan Smith-Gobat (2011) and Hazel Findlay (2017).

Like most who aim to free climb the route, Goris worked the crux pitches on upper headwall before launching upwards at 6:00 am on Monday morning. The ascent went far smoother that she had envisaged and she topped out on Friday at around 18:00, 3 to 4 days ahead of her most conservative schedule.

On reaching the summit of the Big Stone Goris stated that her repeat was “the completion of one of the most incredible experiences I’ve ever had in climbing and in life.” Interestingly, this is Goris’ first big wall on El Cap.

The Salathé Wall
First ascent: Royal Robbins, Chuck Pratt, Tom Frost, 1961
Length: 870m (35 pitches)
Grade: 5.13b 8a/8a+
First free ascent: Todd Skinner and Paul Piana swinging leads, 1988 . In June 1995 Alexander Huber became the first to lead all pitches free, adding one offwidth pitch to avoid a  5.13b pitch above the Ear, and a 5.13a variation between E1 Cap Spire and the Block to avoid a wet crux.
One of the all-time monuments to free climbing, the Salathé is perhaps the most logical big wall up El Capitan. Every pitch has its own story to tell and, as always in Yosemite, has its own name. Every pitch is legendary. And marked by good belays. Normally the route is climbed by ascending the first 10 pitches to the Mammoth Terraces to then abseil to the base via the Heart Ledge before continuing the ascent the next day.

‘A schedule of rigorous train’ protecting an area group of hikers...