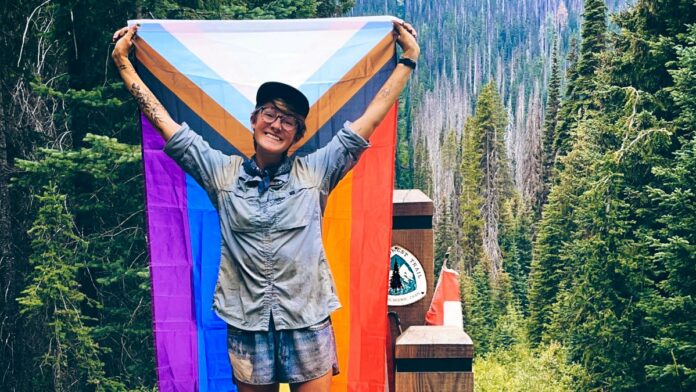 On Thursday, August 11, 25-year-old Cal “Starburst” Dobbs (they/he), completed their thru-hike of the Pacific Crest Trail, becoming the first reported transgender hiker to triple crown. To become a triple crowner, you have to complete the 2,000-mile-long Appalachian Trail, the 3,000-mile Continental Divide Trail, and the 2,650-mile Pacific Crest Trail. All in all, the accomplishment involves traversing the United States three times; only about 500 people have ever finished this monumental endeavor.

Dobbs became one of them over a span of four years. They began the first chapter of their triple crown in 2018 on the Appalachian Trail, tackled the Continental Divide Trail in 2021, and yesterday’s entrance into Canada marked the final chapter of their journey.

“​​I’m definitely feeling elated and exhausted,” Dobbs told Outside. “I’m starting to feel the gravity of the accomplishment of it, and the significance of it.”

Dobbs began thru-hiking as a medium for exploration. But another important driving factor for them was providing representation for the LGBTQ+ community in the outdoors. “I do see being the first [publicly] transgender person to triple crown as an incredible privilege and responsibility,” they said. “It is important to have people you can see. You can’t be something you can’t see.” Dobbs also said that they, by no means, represent the entire queer and trans population, but they hoped that completing their triple crown would provide representation, while creating opportunities for conversation and education.

“Ignorance is not a bad thing. It’s an opportunity,” said Dobbs. “People are worried about saying the wrong thing or hurting other people. But I think what’s most important is that we don’t let that fear discourage us from trying. It’s okay to make mistakes and ask questions.”

Starting conversations about community acceptance could offer opportunities for change. Dobbs hopes their representation will help de-stigmatize the narrative surrounding gender and sexuality. And their work seems to be paying off, said Dobbs. “It’s hard to know the impact of something like this until other people reach out and connect with you,” they said. “It’s been really special to see that my intended impact is transpiring. It makes everything feel worth it.”

Dobbs isn’t done hiking. In just four days, they plan to continue their outdoor journey by completing the Pacific Northwest Trail, the next leg of the Great Western Loop, which links five long trails in a nearly 7,000 mile tour of the American West. They hope to complete the remaining trails late this year or early next year while fundraising $7,000 for the Trevor Project, a nonprofit devoted to suicide-prevention efforts in the LGBTQ+ community.

Tenting alongside the Mississippi was an journey

An Ode to the Lowa Baldos, the Finest Pair of Mountaineering...

Growing Expenditure on Off-Trailing Actions and Out of doors Sports activities...