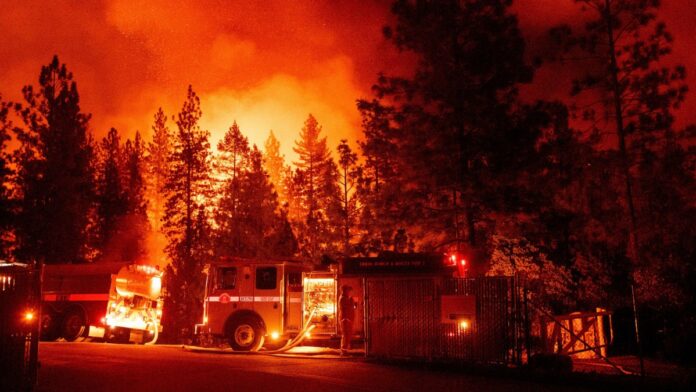 California’s largest fire this year is currently burning on the western slope of the Sierra Nevada mountains, east of Sacramento, threatening several foothill communities known for their proximity to one of the most iconic ultrarunning races on Earth—The Western States 100 Mile Endurance Run.

Specifically, the section of the course most threatened or burned is the 18-mile section from Devil’s Thumb (Mile 48), through Foresthill (Mile 62), to Cal 1 (Mile 66).

Around 6 p.m. on September 6, 2022, a fire began on Mosquito Ridge Road— for which the fire is named—on the northern side of Oxbow Reservoir, several miles south of Michigan Bluff (Mile 55.7 on the Western States course). High winds and steep terrain created a difficult task for fire crews to suppress the growing fire. The cause of the blaze is currently unknown and under investigation.

The fire began following several days of record-setting heat in the region, troubling for an already drought-stricken California. Sacramento, 50 miles west of the fire zone, hit an all-time high of 116F, breaking a record set nearly 100 years ago.

As of September 15, the Mosquito Fire has burned 65,000+ acres and is currently 20% contained. There are more than 3,000 firefighters currently fighting the blaze, and 11,000+ local residents have followed mandatory evacuations.

Communities along the Western States 100 trail—Michigan Bluff, Foresthill, and Todd Valley—have all been evacuated, with relief areas setup in the surrounding communities. Supplies are being made available to dislocated residents at the local junior college.

One of those evacuated residents is Dave Hope, a runner who’s lived in Foresthill (Mile 62) with his wife and six children for ten years. Hope was one of two runners from Foresthill to have participated in this year’s Western States 100.

It takes him less than five minutes to access the trail from his home.

“Everybody’s reaching out to us,” said Hope, after evacuating to Echo Summit, near South Lake Tahoe. Currently crammed into a mobile tiny home, his family is awaiting news on the condition of their home. “We’ve had ten invites from various ultrarunners in the Auburn area to come and stay at their house. People are immediately opening their homes and supporting in any way possible.”

RELATED: When “Running Towns” Go Up in Smoke

The problem-solving solidarity so often found in trail communities is showing up again and again during this time. “You know how ultrarunners are on the trail,” said Hope. “It’s great to see, in a situation like this, that it’s the same thing. It’s the same spirit as on the trail. Here we are, displaced, and people are reaching out right and left, trying to help. It’s just awesome.”

Hope speaks fondly of this landscape that’s on fire, as if it were an old friend. He shared one poignant moment in 2016, while on a training run from Robinson Flat to Foresthill, when he experienced a significant bonk deep in the canyons at midday.

Curled up on the side of the trail, an oversized black bear came bumbling along several feet from him. They both spooked each other, and the bear took off into the bushes, delivering Hope the adrenaline he needed to get himself out of the canyons alive. “I jumped up and got such a shot of adrenaline! Immediately I was fine and was able to keep going.”

“You know how ultrarunners are on the trail. Here we are, displaced, and people are reaching out right and left, trying to help. It’s just awesome.”

Tina Sinetos was the second runner from Foresthill who participated in this year’s Western States. She’s lived in the area for over 30 years, nearly her whole life, and has volunteered at the El Dorado aid station for the past decade.

“There’s nowhere in this world I would rather live,” said Sinetos. Her husband, Robert, is a firefighter, and is currently battling the fire in Foresthill. Sinetos evacuated with her two children to Granite Bay, near Sacramento, to stay with a running partner. “Our running community has showed up for us big time,” said Sinetos. “I am getting messages hourly, asking what they can do to help, if there is anything we need to get by. I haven’t even had enough time in the day to respond to all of the messages.”

According to Sinetos, the most important thing for trail lovers to do, in response to the fire, is get involved in local trail stewardship. “Stay up-to-date on trail work opportunities. Sign up. Let’s get out there and take care of our trails!”

Ayn Loehor is another trail runner and active community member who’s lived in Foresthill for over 20 years. She and her family—including their 18-year-old kid, a dog, cat, tortoise, and iguana—were evacuated to Lincoln, 45 minutes away. “It came awfully close to many of our homes, including mine, within half a mile,” said Ayn.

According to Sinetos, the most important thing for trail lovers to do, in response to the fire, is get involved in local trail stewardship. “Stay up-to-date on trail work opportunities. Sign up. Let’s get out there and take care of our trails!”

This was the first official evacuation they’d ever experienced, as wildfires are a near-constant threat. “Heck, the [Foresthill] high school mascot is aptly named Wildfires!”

Despite living in fire country, Loehor feels fortunate to have these canyons in her backyard. “I look forward to our community banding together to heal the scars the fire has made,” said Loehor.

A Landscape Familiar With Fire

California’s Sierra Nevada foothills are an extremely fire-prone landscape, worsened by a rapidly changing climate, encroaching human pressure upon what’s known as the wildland-urban interface (WUI), a legacy of fire suppression, and the state’s strong winds, which can dry out vegetation and quickly distribute fire across landscapes.

Additionally, this is not the first time fire has threatened the Western States course and its adjacent communities. According to the Western States 100 website, in 2001, the Star Fire burned over 16,000 acres for three weeks, taking out parts of Red Star Ridge (Mile 15.8) and Duncan Canyon (Mile 24.4), resulting in course modifications to avoid the burned areas and let the forest regrow.

Between 2005 and 2006, hundreds of volunteers, mobilized by the Western States Board, put in over 1,000 hours making the trail passable through Duncan Canyon. They removed over 500 trees and cleared 13 miles of trail from Red Star Ridge and Robinson Flat (Mile 30.3).

RELATED: One Scientist on Running and the Climate Crisis

In 2008, Western States was canceled for the first time in the race’s history due to fires active near the course. At least two fires burned within two miles of the trail, compromising multiple access roads. This was the only time the race had been called off, until 2020, when the pandemic required its cancellation. More recently, the 2013 American Fire threatened communities along the course.

What Western States 100 Officials Are Doing

Tim Twietmeyer is a five-time Western States 100 winner and the only person to have finished the race more than 25 times in under 24 hours. As a member of the Board of Trustees and the current president of the Western States 100 Foundation, few others in the ultrarunning world know this course better and more intimately than Twietmeyer. He lives in Auburn, California, 20 miles west of the Mosquito Fire.

“[As of September 14], several structures in Michigan Bluff were consumed by the fire, but the houses on the main street in what could be considered downtown Michigan Bluff are still standing,” said Twietmeyer. “This includes the areas where the aid station is for the run.”

He reinforced the strength and solidarity of the ultrarunning community, how they are showing up to offer support in any way they can. “Local runners and other groups are staffing relief points as well and donating money and goods,” said Twietmeyer. The Western States 100 staff and board continue to monitor every inch of the Mosquito Fire, with regular updates on Twitter.

“We don’t know any specifics on the condition of the [Western States 100] trail, but it appears from maps of the fire that most of the trail from the Pacific Slab Mine below Last Chance (Mile 43.3) and the Cal 1/Dardanelles (Mile 65.7) aid station have seen the fire burn through the area,” said Twietmeyer. “That represents about 20 miles of the course.”

This map update is at 9/14/22 at 7:10 am. WS trail in purple. Current #MosquitoFire in orange, 2013 American Fire scar in brown to the northeast of Devil’s Thumb. Waypoints are our aid stations. Trail now effected between before Devil’s Thumb (~47 mi) and past Cal 1 (~66 mi). pic.twitter.com/F7UxvRbPyx

“Our trail representative and race director have met with the USFS to discuss plans for when the fire is out, but the main focus now is preserving life and property,” said Twietmeyer. “The run has been through this a few times, so when it’s safe to be back on the trail, we’ll be doing everything possible to get it ready for the 2023 event.”

The 2023 running of the Western States 100 Mile Endurance Run marks its 50th anniversary, which is a significant milestone for the world’s oldest 100-mile trail run. But for now, the focus is less on running long distances and more on supporting the local communities and wildlands in peril, and the firefighters on the front lines.

Ways to Support and Stay Informed

Special thanks to Jessica Harris and the wonderful folks at The Mile 99 Interview Podcast for their support for this article.

The Greatest View in Each State

Household Pleasant hikes with out climbing a mountain

Rossignol Introduces the Most Recyclable Ski To Date