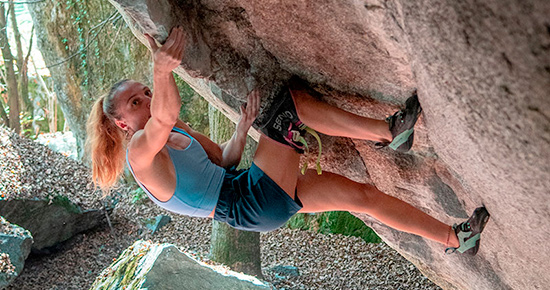 In Switzerland Camilla Moroni has sent four 8A+ boulder problems, ‘Delusion of Grandeur’ and ‘Second life’ at Chironico, and ‘Primitivo stand’ and ‘King of Sonlerto’ in Val Bavona. The 21-year-old Italian climber has also sent her hardest problem to date, the 8B ‘Heritage’ in Val Bavona.

As soon as the competition season ends the athletes flock to the rocks before resuming training for the next year, and a climber who is currently making waves in Switzerland is Italy’s Camilla Moroni. As of mid-October, the 3-times Italian Boulder Champion and 2021 Vice World Champion has been climbing hard on the granite outcrops in Chironico and Val Bavona where she has sent – at surprising speed – a series of problems that confirm her raw power and incredible talent.

At Chironico the 21-year-old Italian made short work of Delusion of Grandeur and the spectacular arête Second Life, while in Val Bavona she sent the classic testpieces Primitivo stand and King of Sonlerto. All four problems are graded 8A+, and she needed no more than 4 sessions to climb each of them.

Taking advantage of her perfect shape and mint conditions, Moroni then dispatched her winter project, ie Heritage in Val Bavona. This problem was established in 2012 by Carlo Traversi and originally graded 8B+, although in recent years consensus puts the grade at 8B. Regardless, it represents Moroni’s “best achievement on rock so far.” Once again she needed just 4 sessions, 3 this season plus one last year. Italy’s first female 8B+ is perhaps not too far off.

My ex is tenting on my driveway, and I would like...

Damaged Complete Gymnasium Press Up Bar and Some New Workouts

6 Methods You Can Get Diarrhea on a Tenting Journey (And...