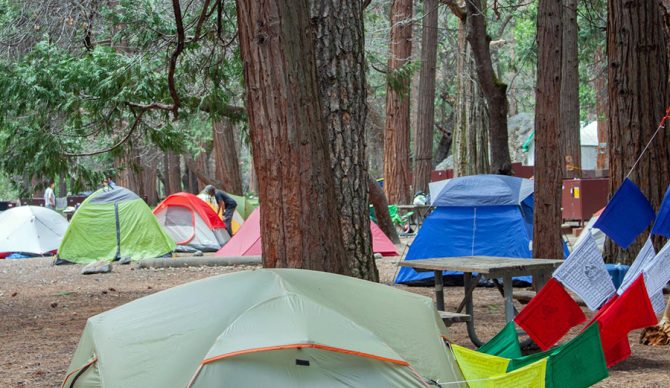 On the north side of Yosemite Valley, Located at the base of one of the world’s most iconic rock formations, El Capitan is a breakaway campground known for its colorful tents and innovative athletes who thrive outside of the mainstream. It’s a place that has become iconic in climbing history.

The Ahwahneechee Indians named Half Dome the “face of a young woman stained with tears” due to colonies of lichen that formed the dark, weeping streaks along the drainage routes on Half Dome’s face. Legendary photographer Ansel Adams captured its rugged beauty. But climbers have consistently tested themselves there, pushing the limits of human capability – and Camp 4 is at the heart of it all.

This feature is only available on The Inertia+

*Billed annually. Join The Inertia+ for the price of one oat milk latte (or two bars of wax) per month.

Despite being in the center of Yosemite Valley, you’d think Camp 4 would be pretty…well…average. But this smut is rich in meaning. These days, when driving or hiking to Camp 4, there is an overwhelming sense of admiration and excitement that pulses through the campground. Climbers fill the camp, chalking their hands to boulder routes like Midnight Lightning, preparing their gear for bigger climbs, and laughing when they flop on crash pads.

In 2003, Camp 4 was officially listed on the federal government’s National Register of Historic Places for “having its significant association with the growth and development of rock climbing in Yosemite Valley during the ‘golden years’ of pioneer mountaineering.” This comes after a contentious battle between climbers and the National Park Service, who insisted on naming the camp Sunnyside.

The NSP and the Curry Company, Yosemite’s only concessionaire, wanted the valley’s dirtbag climbers to give way to Winnebago hookups and larger, more commercial camps. But a group of climbers fought to save the place. And that’s exactly what he did in 1999. As climbing author Doug Robinson wrote, “Camp 4 is the physical and spiritual home of Yosemite climbers.” And that’s how it became iconic.

Just as the schools say legends walked the halls, legends can be witnessed scaling these walls in Yosemite.

It all began, they say, in the 1950s “Golden Age” of climbing, marked by rivals Royal Robbins and Warren Harding in their 14-year duel to outshine each other. With nylon ladders and thin boots, climbing in the mid-20th century looked very different than it does today. It was a sport that didn’t fully exist yet, which means the “right” gear didn’t exist either. Instead of tightening a harness, you would tie a piece of webbing around yourself and hope it stays together while you clip metal hooks into cracks in a rock face.

Down at Camp 4, the scumbag dream life was really going on: a climb all day, drink all night antithesis of a post-war bourgeois America that optimized a comfortable if monotonous life in the suburbs. While Robbins and Harding undoubtedly motivated the climbing revolution, the two couldn’t have been more different. A learned and intuitive Robbins sat under a tree, reading poetry and writing in his notebook while thoughtfully devising routes and personal ethics to follow when climbing. For Robbins, rock climbing was both a spiritual exercise and a physical exercise, and he believed that “getting to the top is nothing. How you do it is everything.”

Almost his opposite was the party hard Harding, who climbed with rigor, lawlessness, crime and lots of booze. Harding viewed Robbins’ rulebook as a warrior poet as limiting the bold freedom he loved about climbing, and he did just about everything he could to reach the top.

Over the years, the two men tossed their rivalry back and forth, outshining the other with every performance. The Face of Half Dome, The Face of El Cap, The Nose of El Cap, The Dawn Wall and so on. Although their techniques and perspectives were very different, these two undisputed greats of their time paved the way for the climbing world that followed. They use the now famous Camp 4 as a base. 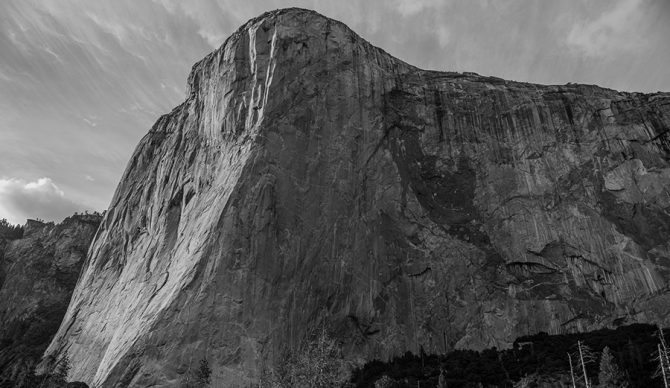 The reason Camp 4 even exists is because of El Cap. Photo: Avery Schuyler Nunn

More climbers flocked to the valley and more innovative gear was produced. In the trunk of a climber’s car outside of Camp 4, garden-made hooks and carabiners laid the foundation for the future of climbing. The climber who lived happily on canned food at the time was Yvon Chouniard.

The next era of climbing in the 1970s and 1980s was that of the “Stone Masters,” led by Camp 4 climbers like Jim Birdwell, who charged down the valley with heaps of acid and a tremendous new level of athleticism.

Lynn Hill, who started keeping up with the boys and climbing under Birdwell’s wing as a teenager, set new standards for both women and climbing culture itself by making the first free ascent of The Nose on El Capitan in 1993 .

Which brings us to the newest generation of Camp 4 climbers dubbed the “Stone (or playfully Stoned) Monkeys.” Climbers like Tommy Caldwell, the late Dean Potter, Chris Sharma, Michaela Kiersch, Aaron Jones, Alex Puccio, Alex Honnold and more continue to push the boundaries of climbing with tougher routes, bigger walls and even free solos (thanks, Mr. Honnold). With every attempt and climb that brings us closer to these human limits. Yes, Camp 4 is steeped in history. And part of Yosemite like the endless granite walls.

How versatile is the Dango Carabiner & Shackle?

EKY church companions with out of doors recreation teams to ship...