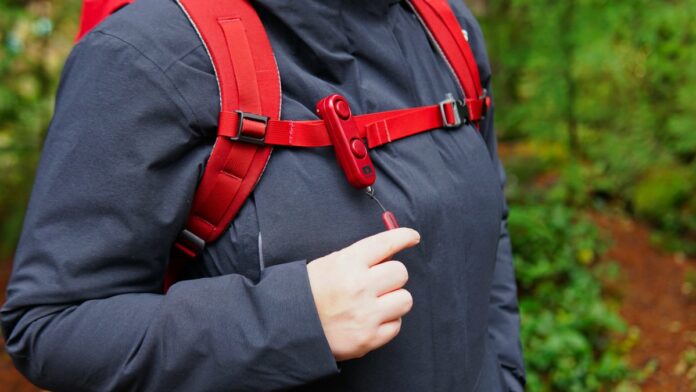 If you have concerns about solo hiking or running after dark, you may want to carry a personal safety alarm to help in a crisis. But let’s keep one thing straight: you should not rely solely on a noise deterrent to keep you safe outdoors. Pulling the ripcord won’t magically transport you out of a situation; you still have to do something after it’s activated. I spoke with a self-defense expert and wildlife biologist to learn the benefits—and limitations—of these devices. Spoiler: they’re no replacement for preparation and education.

What Is a Personal Safety Alarm?

A personal safety alarm is a small fob or handheld device that activates a siren with the pull of a cord or push of a button. There are many different models, but I’ve had the Nathan SaferRun Ripcord Siren ($18) for a few months now. It’s about the size of a lighter, has a hinged clip that easily secures to a waist or sternum strap, and emits a 120-decibel sound similar to the piercing ring of a smoke detector (120 decibels is as loud as an ambulance or police siren). When I clip it to my pack, I certainly feel safer on isolated trails with my young son and pup. But the thing with deterrents is you never know if they’ll work until after the fact. If I panicked, would I even be able to use it correctly?

“Adrenaline affects your ability to use things in a stressful situation,” Nicole Snell told me over the phone. Snell is a solo adventurer, self-defense expert, and CEO of Girls Fight Back, a personal safety and empowerment self-defense program for people of all gender identities. (After our discussion, I binged on Snell’s Outdoor Defense series on YouTube, where she goes over key pieces of information like why putting your keys through your fingers like Wolverine is a bad thing and what to do if you’re being followed by a stranger.)

How to Use a Personal Safety Alarm

An alarm’s main purpose is to draw attention. The Nathan siren I carry makes it easy to do that—it has a pull tab with a pin that activates the alarm (just push the pin back in to stop the siren). The two button-shaped features are the speakers that emit the noise.

“An alarm could help get people’s attention if you had an accident, an injury, or you’re lost,” Snell explains. “If you’re using this type of device as something you put in your emergency kit, it could absolutely be beneficial.”

But there are a number of scenarios in which it probably wouldn’t play out that way: there’s not another person close enough to hear it, the batteries are dead, you fumble and drop it, or maybe it just doesn’t deter, Snell says. Because it’s just noise, it doesn’t communicate information the same way voices and body language can. “No matter what, you’re still going to have to do something else while you wait for help to arrive or get to safety.” In that regard, personal safety devices might give people a false sense of security.

“We have everything we need right now on our bodies to be able to protect ourselves,” Snell says. She teaches skills like being aware of your surroundings, using your voice, setting boundaries, putting your body in a defensible position, keeping distance, physically defending yourself (which includes heel-palm strikes and knees to the groin), and getting to safety.

“If you are going to carry something, just understand there are limitations. And whatever you bring into a situation, make sure you train with it.” At the end of the day, she encourages people to do their research and make informed decisions because each person is in charge of their own personal safety.

This advice closely echoes what biologist Linsday Welfelt told me about animal predators. Welfelt is a bear and cougar specialist with the Washington Department of Fish and Wildlife and has worked with large carnivores for over ten years. So would a personal safety alarm be an effective tool during a dicey wildlife encounter? “Avoiding a negative interaction in the first place is so much more effective,” Welfelt says.

However, a noise deterrent like a personal siren can successfully move a bear off when combined with human dominance techniques. “We know that things like air horns, whistles, and even clapping our hands really loud can distract an animal enough to make it leave. So [a personal safety alarm] is another tool, but it’s not the end-all, be-all,” says Welfelt. Knowing avoidance techniques and what to do if you encounter a bear or cougar are the skills you really need. “Being alert to your surroundings, not hiking or biking at dawn and dusk, making noise to avoid any surprise encounters—those things are going to be most effective.”

When is the best time to use the siren on an animal? “If something is being curious or following you, and they’re really focusing on you, I think that would be the best situation because it can break that focus,” says Welfelt. But again, once you activate the alarm, you need to be ready for whatever might be coming your way.

Welfelt said she wouldn’t count on an alarm in an accidental animal encounter but that it could work as backup. “Bear spray would be much more effective.” As a physical deterrent, bear spray is a more proven defense when handling a bear encounter—if you’ve practiced using it and have it stashed where it’s easily accessible.

Personal safety is about preventing bad encounters in the first place by knowing about the area you’re in, staying alert, reading the signs, and reacting with the appropriate combination of defensive techniques. It’s not about relying on a single deterrent to keep you safe. “Carrying something can help you feel a little more confident, but it’s no substitute for training, being prepared, and having some education on what you can do,” says Snell. “That’s even more empowering.”

DRONE: Meta tower climbing to last type that can be over...