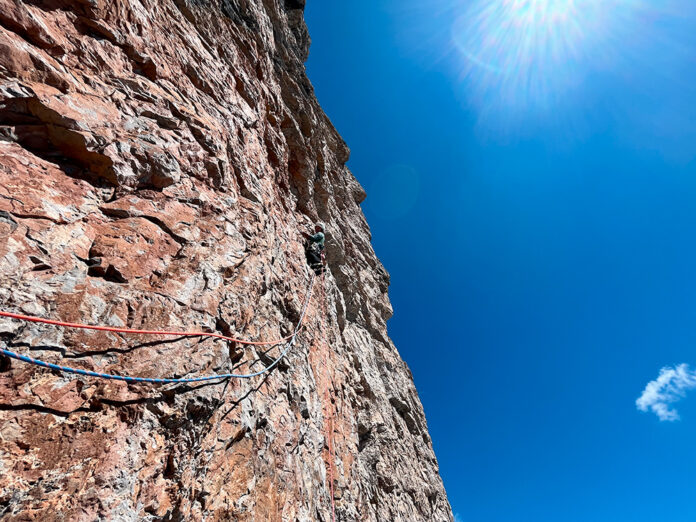 For some years now, in my own climbing, I’ve prefer the company over the grade. Having the right company is the prerequisite for having a good adventure. And when I’m with Alessandro and Alberto I don’t have second thoughts or need to ask myself questions: I know right from the outset that it’s going to be a beautiful day. It is a question of alchemy.

For some years now I accepted being, first and foremost, a photographer instead of a mountaineer. And anyways, when tieing in with a mountaineer like Alessandro, a superb expert of the Dolomites, I always feel like an absolute beginner.

And for some years now, whenever I’m out and about, I like make sense of the things we do. I can’t help it. And the meaning of this route stems from our desire to climb a mountain according to the rules of traditional mountaineering.

We followed the most logical line in the middle of the South pillar, following the vein of hyper-compact red and black limestone that has remained intact through this sea of ​​crumbly overhangs. The climbing is never trivial, but the most difficult sections are protected by pegs. At each belay there’s at least one bolt (8mm), backed up by a peg. The belays up to pitch 7 are equipped with an abseil ring, above this it’s not possible to rappel the route without abandoning gear.

We decided to end the route by sharing the same exit as the other historic routes and we quickly continued up to the summit, just in time to enjoy a beautiful sunset in a quiet corner of the Brenta Dolomites. Our beloved Brenta. Brenta Caput Mundi.

CAPUT MUNDI by Alessandro Beber
As you walk up into Val Perse, the elegant reddish pyramid formed by the south face of Cima Roma attracts the attention of all mountaineers. There’s a route that runs up the arête on the right, first ascended in the early 1970s by M. Pilati – V. Chini and R. Pellegrini, and another route put up by ace alpinist Matteo Armani back in 1935. The latter runs up the obvious corner on the left but, inexplicably, in all guidebooks it’s marked incorrectly; perhaps this is why the central overhangs remained untouched until we arrived in summer 2022!

I decided to spend the 8th of June, my birthday, with my friends and check out the route we’d envisaged. After an exciting first pitch, while establishing the belay I smashed my finger with a clumsy blow of the hammer. Game over for me, but luckily Matteo took the lead and added another couple of pitches that enabled us to enter the heart of the face… it looked superb!

We only manage to return at the end of August. My finger, which was still without a nail, suggested we take a drill to equip at least the belays, and we decide to follow this advice… so after a couple of days of work (the mountain isn’t exactly around the corner and the approach requires time) we manage to finish the line with series of great, highly satisfying pitches.

On the summit of Cima Roma we gazed across all the Dolomites. As the shadows around us lengthened, we were happy to be there together, three friends in the center of their little world.

Síclovía will have fun outside recreation in San Antonio on Sunday...

Quetico backcountry closed to tenting, journey as a consequence of forest...

4 new miles of trails to be in-built Previous Fort   |...

10 Issues to Do with Youngsters at Rocky Mountain Nationwide Park