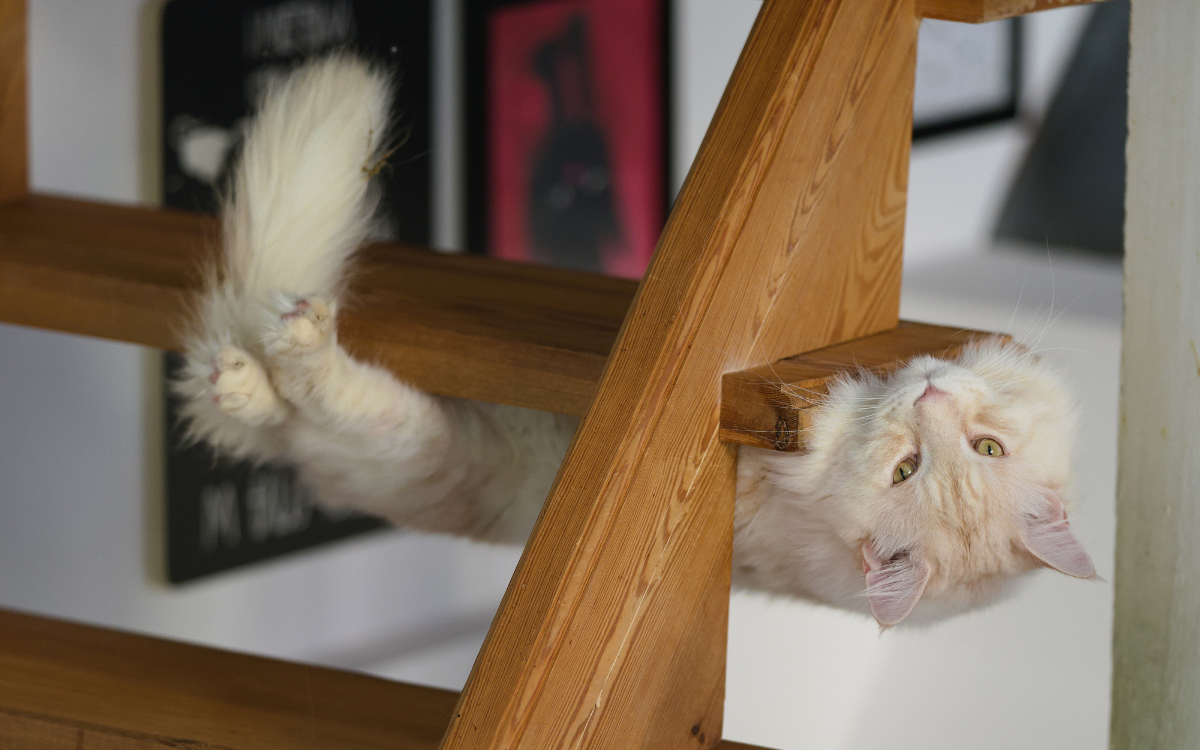 A gravity-defying cat has gone viral on TikTok after its owner shared a video of the pet moggy climbing a flight of stairs upside down.

The confusing footage was uploaded to social media by brandonj612, an account dedicated to clips of a white and red cat named Cheeto.

In the clip, which has been viewed over 26 million times, Cheeto can be seen climbing the underside of what appears to be an apartment building hallway.

Making the best use of its claws, the cat climbs the stairs headlong and finally reaches the top, where the presence of the blanket prevents it from going any further.

You can watch the video here.

While this particular pet’s behavior may be confusing to some, for cat behavior consultant, trainer and educator Allison Hunter-Frederic, it’s a natural result of something ingrained in every cat.

“Climbing is one of the first ways cats learn about their skills and abilities. It’s her way of developing her muscles and working on flexibility and balance,” she told allpetvoices.com.

Hunter-Frederick explained that cats have an “instinctive urge to climb,” passed down from their ancestors. “In the wild, cats may chase their prey up a tree, or they may use a tree as a hidden place to hunt from,” she wrote.

“Cats still prefer to see their surroundings from a vantage point and might use it to pounce on another housecat in a game of chase.” She noted that there was also “a certain prestige,” a high one to fill a position in the house. “Cats that control the top perch are generally the most dominant or ‘top cats’.”

The cat in this clip has definitely gained “certain prestige” on social media, judging by the comments on the video.

Mr__5k called him “Spider-Cat” with Pet..Supplies was similarly stunned by the cat’s “anti-gravity” exploits. Darcywusrealwife went even further, stating, “This cat has beaten gravity.” And1213456781 slightly disagreed, stating that this “cat doesn’t believe in gravity”.

ClawBoss loved the end of the video, where the cat seemed “surprised” when she realized “that she couldn’t go on.”

Harald Ramond offered a unique take on the clip, noting that turning it upside down makes “even less sense”.

Sungodnika__ was convinced that “that cat just watched Spider-Man: No Way Home,” while Tal Hakmon quipped, “Spider cat, spider cat does exactly what spider does.”

Life_XD struggled to watch the video, writing, “This is all fun and games ’til his paws slip.” Most, however, focused on the Spider-Man comparisons, with one of the best comments coming from Ellaamanda99, who joked : “That’s not a cat, that’s Peter Parkour!”

With temperatures climbing, cooling areas arrange in Kelowna to beat the...