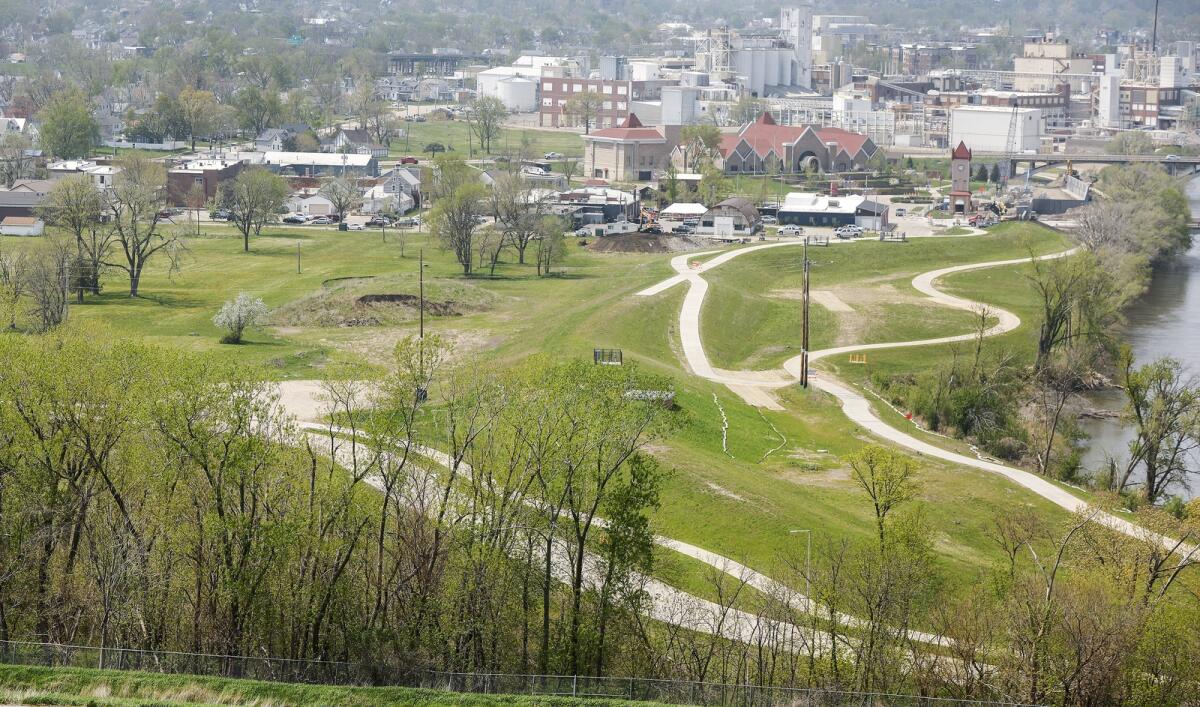 A May 11 view of the western side of the Cedar River, showing the Czech Village Greenway Park from the summit of Mount Trashmore in southwest Cedar Rapids. (Jim Slosiarek/The Gazette)

Work continues on a flood wall May 11 near the Czech and Slovak Museum and Library in southwest Cedar Rapids, Iowa. (Jim Slosiarek/The Gazette)

An old railroad bridge will be the site for the Alliant Energy LightLine footbridge in southeast Cedar Rapids. (Jim Slosiarek/The Gazette)

CEDAR RAPIDS – The City of Cedar Rapids is reducing its request for a $100 million share of federal grants from $27 million to $8.4 million to support outdoor recreation around the greenway along the Cedar River River in Czech Village and New Bohemia and raise Iowa’s national profile to attract more tourists to the city.

City officials have revised the Destination Iowa program application and resubmitted it to the Iowa Economic Development Authority, at the agency’s officials’ suggestion, with a narrower scope to seek support for the $119 million Greenway Recreation and Recreation plan Revitalization” project. State officials created the Destination Iowa program with funding from the federal American Rescue Plan Act and invited local governments to bid for a portion of the money.

The revised application incorporates key target features from the original application in a $25.6 million “LightLine Loop” project located on the Czech village green space. This largely includes a roundhouse, recreation zone, and plaza area, with a focus on how the funds would boost tourism and recreation – one of Destination Iowa’s four buckets of funding.

Jennifer Pratt, director of community development, said these amenities build on the loop created by the proposed Alliant Energy LightLine Bridge that will bring the two historic neighborhoods — Czech Village and NewBo — together.

“The projects highlight the city’s history with industrial growth and immigration history, and reflect the city’s message of ‘Welcome is our language,'” Pratt said. “It also offers a next-level tourism experience for those visiting our community. The new facilities fill a gap identified by the Cedar Rapids Tourism Office for outdoor recreation spaces that can accommodate the large tourist groups they seek to attract to our community.”

In the revised application, Cedar Rapids officials suggest that greenway investment and tourism experiences have been redirected over the years to recovering from the 2008 and 2016 floods, including construction of the $750 million permanent flood defense system as well as the Derecho of 2020.

The Cedar Rapids Tourist Board has had “great success” in presenting the Czech Village and New Bohemia District to visitors – typically attracting 600 to 1,200 spectators at large conventions and conferences, depending on the request. However, one challenge with the tourist attraction was a “lack of marketable collection areas with a unique attraction in Cedar Rapids.”

City officials estimate that LightLine Loop would solve this problem and result in an annual economic impact of approximately $4.7 million to $12.5 million.

On the NewBo side, the funding would support ConnectCR Park, which will be located at the landing site of the LightLine Bridge, which will connect the eastern and western core neighborhoods as part of a larger grassroots project to revitalize Cedar Lake north of downtown.

Funding has been secured for the $11 million bridge, which will be part of the Cedar Rapids segment of the American Discovery Trail for pedestrians and cyclists and is part of the Great American Rail Trail.

The $1.5 million park includes walking and cycling facilities for those using the statewide trail, as well as historical exhibits that pay tribute to the area’s industrial roots. This room housed TM Sinclair and Co.’s meatpacking plant, once the fourth largest in the world.

A new recreational trail along Fourth Street SE from Ninth Avenue to the river is also a funded component of the project. This path will connect to the new pedestrian bridge on the river.

The funding application also includes the $3.2 million, 10-acre Czech Village Greenway Park south of downtown, an open space along the river between which 16 will offer a variety of amenities, including a playground.

A $4 million roundhouse — a reimagining of a historic structure damaged in the 2008 flood — would anchor the northern half of the park. The roundhouse is adjacent to a new $3 million pedestrian boardwalk that extends from the 16th Avenue business corridor to the park. This Woonerf — Dutch for “living street” — will connect the Roundhouse to destinations like the Czech Museum, African American Museum of Iowa, CSPS Hall, NewBo City Market, and other attractions.

An element from the original game board that was eliminated in the revised version includes an improved road network with new and improved roads and road expansions – six projects in NewBo and one in Czech Village.

Pratt said the road network is part of the city’s capital improvement program, and development projects often accelerate road construction schedules. “While completing the road network would have been ideal as a large project, it is typical to complete road networks in phases during development,” Pratt said. “We have already had great interest in the vacant lots in the Czech village and in the New Bohemia region.”

Destination Iowa applicants must demonstrate that they have secured at least 60 percent of funding for their projects, which must be completed by 2026. IEDA began accepting applications on May 9th and will review them as soon as they are received by December 31st or until funding has expired.

To date, Gov. Kim Reynolds and IEDA have awarded $16.5 million in first-round funding through Destination Iowa to four projects, including development of a Field of Dreams television series, construction of new hiking trails, and the new Des Moines lakefront amenities.

Climbing a Chilly Kili – Suzanna Mavity has a really completely...

A Determined Want for the Mountains