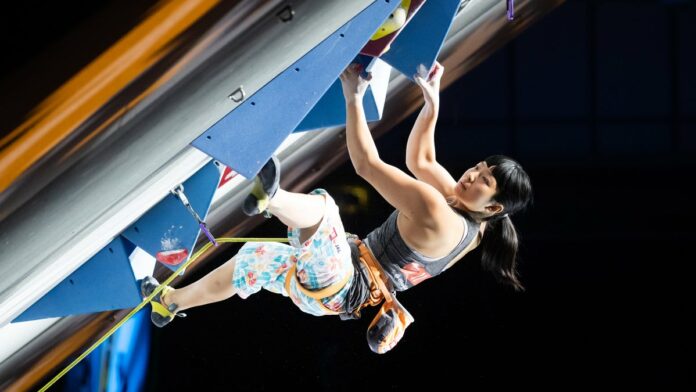 Ashima Shiraishi was six years old when her parents took her to New York City’s Central Park and she scrambled up Rat Rock, a popular bouldering spot in the southwest corner of the park. She befriended Yukihiko Ikumori, the man The New York Times has called the spiritual godfather of Rat Rock, and he helped point Shiraishi in the right direction, offering guidance on routes, and, she says, made climbing fun for her.

Shiraishi quickly became a skilled and decorated climber. In 2016, at the age of 14, she became the first woman and the youngest person to complete a V15, essentially one of the hardest ratings in bouldering, by climbing a route known as Horizon on Mount Hiei in southern Japan. In competition, she earned gold in lead climbing and bouldering at the Youth World Championships in 2015, 2016, and 2017.

Shiraishi, now 20, was born and raised in New York City, the daughter of Japanese parents who moved from Tokyo to the States in 1978. Though she’s currently enrolled as a freshman at UCLA, Shiraishi says she will always consider New York home. She shared her favorite spots in the city.

“Central Park is its own oasis in this concrete jungle. I grew up playing there, so it’s a very sentimental spot for me, but I love the fact that it’s ever changing and the park has so many ways to enrich people’s lives,” Shiraishi says. “There’s one place I love called Sheep Meadow, this huge lawn with freestanding boulders. It reminds me of a sculpture park, the way the rocks are on the periphery. It’s a beautiful place to picnic, take a nap, lay back for a second to breathe, or take time to yourself. It’s healing to be around trees, because that’s rare in New York.”

“The Lower East Side and Chinatown are my favorite places to explore and hang out,” Shiraishi says. “First of all, there’s the food. Beyond that, a lot of younger people are drawn to those areas. The neighborhoods can feel chaotic in their disorder, but that’s what’s at the heart of New York. It’s a calm disorder. Things are moving, but it feels like a blending of different cultures, different generations.”

“GP81. It’s in Greenpoint, in Brooklyn,” Shiraishi says. “It’s a close-knit community and the people are awesome. The climbing quality is the best in the city. The wall angles are catered toward outdoor climbing, so there’s a higher density of steeper pitches.”

“There’s this grocery store in Chinatown called Hong Kong Supermarket,” Shiraishi says. “They have these white sweet potatoes that are purple on the inside. I go with friends, and we try out different snacks and all the vegetables that you don’t typically see in grocery stores. I also like Golden Steamer in Chinatown—they make really good steamed buns.”

“Superiority Burger is one of my favorite restaurants in NYC. It’s all vegetarian, mostly vegan,” she says. “They use seasonal ingredients from the farmers’ market. They have amazing gelato and focaccia. They’re super experimental with their menu. It’s a hole in the wall. There’s this one burger called the New Creation. It’s a yuba burger. It’s mind-blowing. I get really enthusiastic about food. You have to try the vegan gelato.”

“I like Beacon’s Closet and LTrainVintage,” Shiraishi says. “Since they’re thrift stores, I typically go and look for anything that catches my eye. I don’t go in with any specific expectations of what I’m looking for.”

“I love going to the farmers’ markets. There’s a big year-round farmers’ market called Union Square Greenmarket,” she says. “They always have great produce and it’s super fun to see what’s fresh depending on the season. There’s a good honey place and a guy who just sells sprouts.”

“Acre is this Japanese coffee shop slash restaurant, right by GP81,” Shiraishi says. “I like stopping in there before the climbing gym and picking up a coffee or their hojicha tea.”

“For climbing, I love going to the Gunks, which are pretty close to the city, just over an hour away,” Shiraishi says. “The nearby town of New Paltz makes for a good day trip. You can stop there, get great food or visit a farm stand, then go climbing. There’s a place called Commissary that’s a community-oriented food spot with yummy soups, lots of veggie options, and great hot chocolate.”

Outside situations (6/four): Hinckley Reservoir open for public use –

Can Massive 5 Sporting Items Company (BGFV) Inventory Rise to the...