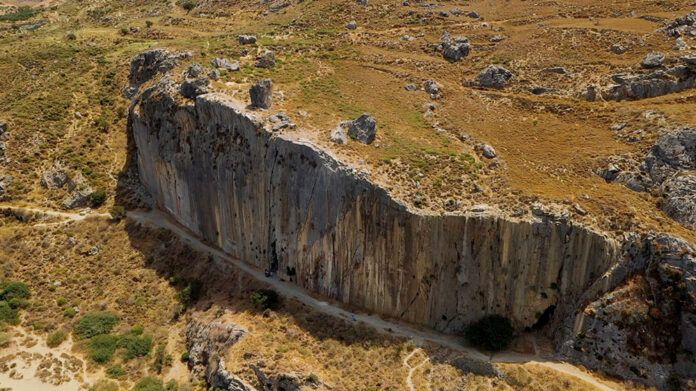 An online petition has been launched to save Paligremnos – Plakias on the island of Crete in Greece.

One of the most famous crags on the Greek island of Crete, Paligremnos above the sandy Plakias Beach, is currently at risk of closure due to a local development project which includes the construction of a large tourist resort above the sheer vertical limestone crag.

The cliff holds great historical and cultural significance on the island, so much so that is actually included in the Atlas of the geological monuments of the Aegean, which aims to protect Greece’s geological heritage. Nevertheless, the local authorities have been slow to apply protection and bulldozers have begun construction.

Due to the outcry works have been halted temporarily while the forest department assesses the impact. In the meantime, a grassroots local group called “Save Paligremnos SOS Plakias” has been created to fight the development, and climbers are asked to sign an international online petition which has now been launched.

In his emotional plea, expert Greek climber Aris Theodoropoulos stated “The rubble and boulders from above are already dangerously close to the edge of the cliff. Let’s fight this with everything we’ve got.”

Vista Outside Named by Investor’s Enterprise Day by day as Prime...

Kayakers take a look at Androscoggin whitewater in Rumford for recreation...

How one younger activist desires to extend BIPOC entry to outside...