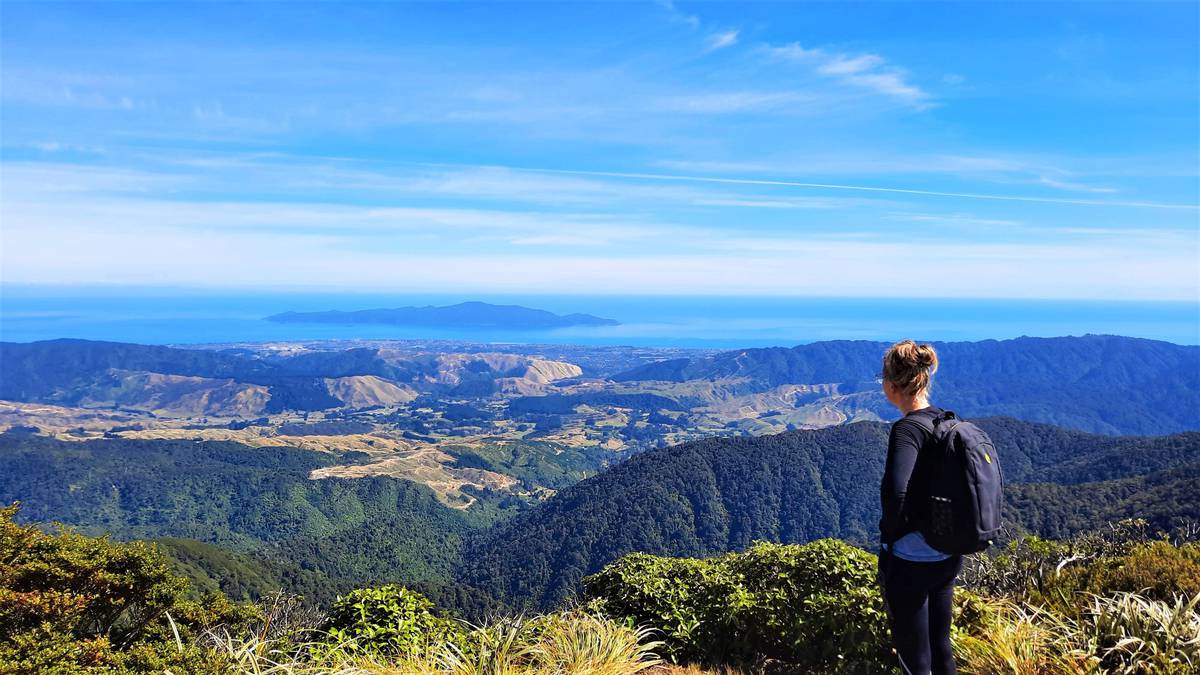 The sun glistened through the gaps in the trees, casting light down the path that opened into a clearing of moss and ferns.

Reminiscent of a magical clearing that wouldn’t have looked out of place in Joanna Spyri’s Heidi or the Oscar Wilde classic The Selfish Giant, I can only describe the scene along the Kapakapanui Track as magical.

At this point we are three quarters of the way up Kapakapanui and the site is a nice place to take a break, but the climb to the top is no walk in the park.

Kapakapanui is an isolated small peak in the Tararua Range with 360 degree views from above.

The Kapakapanui Track is magical in any weather. Photo / Rosalie Willis

At 1102m, the view from the summit spans the entire Kāpiti Coast, South Crossing, Akatarawa Forest and has a surprise at the top – Mt. Taranaki looming above the clouds.

Did the hike a year ago almost to the day, back then the day was drizzly and foggy.

While this made the hike feel wild and magical, once we reached the goblin forest, the fog created an eerie feeling. This time it was an awe.

Commonly found in the Tararua Ranges in areas between 800 m and 1000 m elevation, the goblin forest consists of gnarled and gnarled trees knotted together in an overhanging manner and intertwined with moss, lichen and epiphytes.

The rise to this point had been eventful. Since the Department of Conservation website indicated that we should allow six to eight hours and that the trail is uphill and then downhill, we knew it would take a marathon effort to reach the summit.

On the Kapakapanui Track, gnarled and gnarled trees are overhangingly knotted and intertwined with moss, lichen and epiphytes. Photo / Rosalie Willis

We started around 8:30am with the temp on our car showing it was only 5C outside.

The trek begins with nine river crossings as you make your way through the valley before climbing for a solid two to three hours.

Despite the freezing temperatures, we decided to take off our shoes for the transitions to have dry feet for the rest of the hike. However, we couldn’t remember how many crossings there were, so we put our shoes back on after about seven.

About 30m later we reach another crossing… and shortly after that another one.

Remember next time: Do not put your shoes back on until you have cycled uphill for at least 10 minutes.

Enjoy the river crossings at the end of the Kapakapanui Track. Photo / Tessa Willis

The next three hours were a monumental effort, using the whole body to climb parts of the route.

We pulled ourselves up by branches and roots making it a real climb, not just a walk.

It was a relief to make it to Kapakapanui Hut. But it’s still half an hour to the summit.

It’s amazing what sunlight can do. The cabin looked pleasant and was a great place to stay when the sunlight streamed in – a contrast to the last time I came up which looked dark and dingy on the bleak day we had.

It went on. A number of stops were to be expected on such a climb, along with a slew of complaints.

We finally reached the summit after about three hours of walking.

The view was incredible no matter which direction we looked.

It was particularly special to see Mt. Taranaki sticking its head out of the clouds, which isn’t something you can see every day. To the west the island of Kāpiti stood proud and tall, with the stunning Tararua Ranges to the east.

Here, looking at the vastness of the mountain ranges, I realized the enormity of the climb we had just completed.

While 1102m may not seem that high, the summit towers over the Kāpiti district and is one of the toughest day hikes I’ve done (harder than the Tongariro traverse and up there with Mt Taranaki because of its steepness).

The view of the Tararua Ranges from Kapakapanui Summit. Photo / Rosalie Willis

The way down isn’t any easier and having had blue skies for a week before our hike the ground is dry and loosening the dirt.

Parts of it we could jog down, taking a few risks with our foot, but other parts we pulled out the glamorous butt shuffle.

The walk back took about two hours, long enough to miss the climb.

With cramped thighs and hamstrings strained from treading carefully, we finally made it back down to the river crossings, and this time we enjoyed splashing through them as the freezing water eased our feet.

After spending more time than necessary walking through the river to refresh our muscles, we made it back to the car five hours and 45 minutes after the start.

It was a magical climb, with breathtaking views and a great sense of accomplishment.

Motion seeks to make the outside protected for folks of coloration