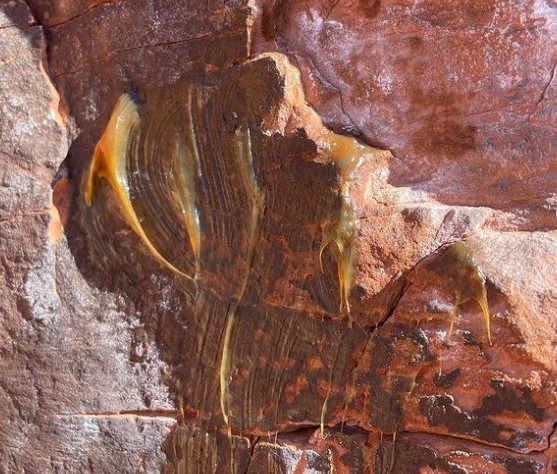 Visitors to Moab’s Big Bend Bouldering Area on Saturday noticed something unusual. Someone had smeared petroleum-based grease on the holds of multiple boulder problems.

The story gained traction over the weekend via social media broadcasting by Moab locals like pro climber Steph Davis. Davis’s post shows the vandalized condition of the boulders, and a later edit posits the theory that someone familiar with the area, and the specific problems and moves, committed it.

“[P]lease note that all the affected holds are on specific eliminate problems, while other nearby holds on the same boulder were not greased,” the post reads. “These sequences and selected holds would not be clear whatsoever to someone not familiar with which holds are on which specific problems.”

However, the boulders’ acutely high-traffic location makes them visible to virtually anyone who drives past. Located right off State Highway 128, the group sits alongside the Colorado River near the Big Bend Campground.

The juxtaposition means that a theory virtually opposite of Davis’s is equally plausible: that a disgruntled nonclimber vandalized the blocks as an easy target.

Moab’s long history of overlapping interest groups underscores what promises to be a tangled investigation.

Chris Schulte serves on the board of directors for nonprofit climbing advocacy group Friends of Indian Creek, and he has climbed prolifically in Moab and Indian Creek. He spoke to the issue’s complexity after receiving a wide array of messages via his own social media coverage of the incident.

“Ninety-percent of the comments or messages I’ve seen have been like ‘it has to be a climber.’ But any person would have to be pretty oblivious to not realize that there’s chalk on these boulders as soon as you stepped out of the car at Big Bend,” Schulte said.

“There’s been climbing there for the last 40 years. And during that time, there’s always been friction between different user groups. Whether it’s locals vs. tourists, trad climbing vs. bouldering, OHV’s vs. neighborhood groups; you name it Anything’s possible at this point.”

Asked if the incident could be connected to last year’s Moab-area petroglyph vandalism, Schulte said rock art is notably absent near the Big Bend boulders.

Local stewards carried out cleaning efforts throughout the weekend. On Sunday night, Friends of Indian Creek reported that attempts to remove the “mechanical” grease had shown signs of success.

However, the group still cautioned climbers to stay off the recently treated rock for the time being. Affected boulders in the area include Black Box Boulder, Chaos Boulder, and Punisher Boulder.

The local Bureau of Land Management office oversees the area, while the Grand County Sheriff’s Office holds jurisdiction. No further vandalism has yet been reported in the area, and the discussion about how to prevent future incidents is ongoing.

“I think there’s a tendency to feel stung by this, or personally attacked, in the climbing community,” Schulte said. “So there’s the urge to ‘catch the bad guy.’ There’s some talk about setting up game cameras in parking lots. That might be something the BLM could help with. But the trouble with increased policing is that the ends don’t always justify the means.”

GearJunkie’s attempts to contact Moab authorities had been unsuccessful as of Monday afternoon.