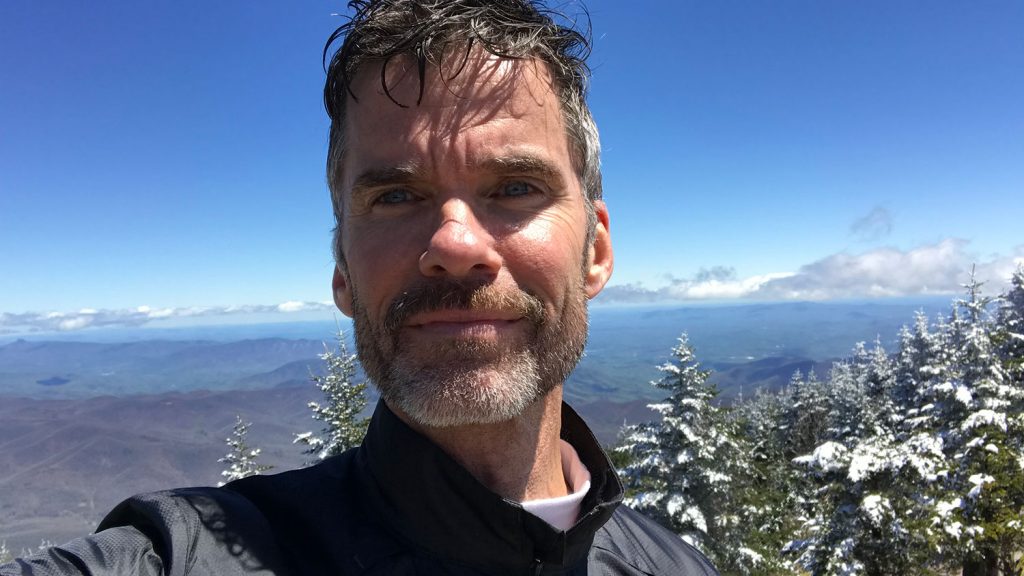 Voices is a series of first-person narratives written by members of the NC State Community that reflect on experiences that have shaped their personal and professional lives. George Elvin is an Associate Professor of Architecture in the College of Design.

When I was 14, I got into trouble with the law. It wasn’t anything big – just a little break in and kick in that happened when my best friend and I were leaning a ladder against a building, climbing to the second floor, and going through the window to see what was inside. To save me from further trouble, my father recommended that I speak to my older brother, as some of his friends had taken a similar route and ended up in prison.

My brother and I had lived in the desolate suburbs of Washington DC our entire lives, so he sympathized with my thirst for adventure. “Find a mountain to climb,” he advised. But my mountaineering opportunities were limited; I couldn’t drive and I didn’t have the money to go on a fancy vacation.

Instead, my best friend and I decided to fly from DC to Québec City, Québec, Canada. After spending a night in town, a combination of train ride and hitchhiking made our way 40 km north to Parc national de la Jacques-Cartier – known to English speakers as Jacques-Cartier National Park – where we met a couple Days of hiking and camping. We chose this destination because the park was (and still is) known for its beautiful mountain scenery; It also made its location in Canada more exotic to us adventurers than a US location.

My boyfriend and I had saved some money from our busboy jobs, so we told our parents that we had enough to cover the travel expenses – not counting the plane tickets, of course. Maybe our parents were dying to keep us on the straight, but for some reason they agreed to let us go and pay for our flights.

After landing at Jean Lesage International Airport, we took a bus into town and started walking to find somewhere to stay for the night. Neither of us had thought of making reservations, so we strolled the back streets of Old Québec – the city’s quaint historic district that’s 400 years old – looking for a vacant sign that blinked in a street window.

Then, as we turned a corner, we saw an open door on the first floor of an inn. Inside, a woman was on the phone with her back to us.

“Very good,” she said, “we’ll get your room ready for you on the 16th.” She hung up and turned to find two young Americans in her lobby. When we asked about a vacancy, she replied in French that she had no rooms.

When it got dark, we continued our search, walked through the narrow streets and occasionally caught a glimpse of the monumental Château Frontenac, an impressive 18-story railway hotel from 1893. Its ornate towers and steep roofs towered high above the old town up on a hill. After visiting a few more hotels and being tired from our long day of travel, we decided to do some research in this imposing building.

As we walked into the big building, we couldn’t have felt out of place in our shorts and t-shirts and heavy backpacks over our shoulders. We walked through the marble-floored lobby and felt like the Tin Man and Scarecrow approaching the Wizard of Oz. In hindsight, if we had known the price of an overnight stay – around $ 400 in 2021 – we wouldn’t have bothered about it. The gentleman behind the counter looked us up and down, paused and told us there were no vacancies.

We sneaked out of this ornate environment and back onto the city streets. At some point we found a much more modest place to stay – a youth hostel that served its purpose, nothing more. The next morning we packed our backpacks and took the train to Vertmont-sur-le-Lac, a town near the park entrance. Hitchhiking north from there was easier than finding a place to stay, and in no time we were near the park entrance in the back of a 1970 Buick Riviera. We thanked the driver and drove down the forest road that ran alongside the Jacques Cartier River.

The valley of the Jacques Cartier River was formed by glaciers over 10,000 years ago and is a pristine home to elk, caribou, wolves and bears. The mountains that frame the valley rise rapidly from the river, reaching heights of over 1,200 feet. At the time of our visit – 1974 – logging companies were still using the river to drive wood downstream to a place where company cars could load it and carry it out of the park. These trucks rumbled past us regularly and kicked up dust on the dirt road while hiking.

And yet the valley was an untouched forest. We spent days walking the riverside dirt road admiring the beauty around us before stopping at night to pitch our tent, make a campfire, and have a bite to eat before bed.

Lured by a waterfall

One day, as we were turning a bend, we saw a tall waterfall cascading down the mountain on the other side of the river, a white line 30 meters long that cut through the green of the trees. We watched this waterfall from afar as we hiked all day. When we camped that night, we decided that the next day we would cross the river and see the waterfall firsthand.

In the morning we made coffee, drank it down, put out our campfire, and lifted our backpacks to wade across the river and hike to the falls. The river turned out to be comfortably shallow. On the other side was a stream that flowed into the river from the base of the falls. We began the slow hike up the creek to the falls, our boots sliding on the wet boulders beside the water. Gradually the rumbling of the falls became within earshot; then we could feel the mist of the water crashing onto the rocks at the foot of the falls.

Eventually the evergreen plants parted and we stood at the bottom of the waterfall. The rumble was a roar now, and the mist had turned to a fine spray as the falls thundered onto the rocks in front of us like a vertical tsunami.

Soaked and tired from our hike, we sat down to have our lunch in the midst of this incredible scene. As we ate, we vowed to climb the slippery rocks along the waterfalls to the top of the ridge so that we could look across the valley on the other side. It was not an easy climb, icy water splashed on our faces and slippery rocks under our hands and feet, but finally we reached the summit and looked excitedly over the neighboring valley.

To our horror, the entire valley on the other side of the ridge was severed as far as the eye could see. We might as well have been on the moon. After witnessing the beauty of the valley behind us, it was an enlightening experience to see the havoc caused by the logging in the valley in front of us.

George Elvin is an Associate Professor of Architecture in the NC State College of Design.

Almost 50 years have passed since my friend and I stood on this ridge trying to understand the extent of the destruction we saw. Fortunately, the Parc national de la Jacques-Cartier is no longer devastated by deforestation of several thousand hectares; A recent satellite view of this area shows a landscape dotted with the checkerboard pattern of sustainable timber. Nevertheless, our great adventure in the north has not let go of me since then and inspired me to concentrate on green building and architecture for extreme environments as a professor of architecture at NC State.

Seeing nature recuperate from the destruction I experienced then and become a majestic forest today gives me confidence that we can help all of nature to heal to ensure a better future for all.

Why I Put in These Off-Street Lights

River Metropolis Journey Firm to supply the requirements for out of...