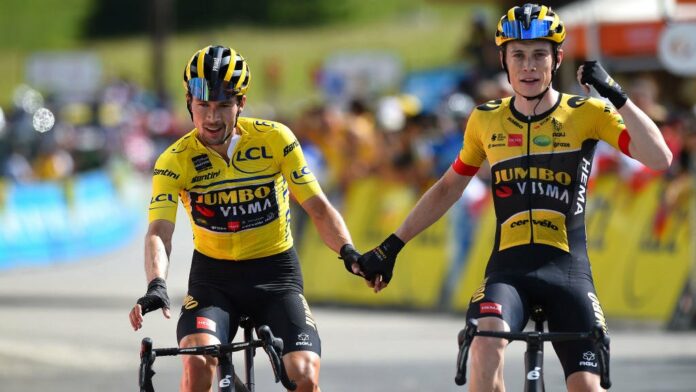 Training for the Tour de France looks very different today compared to how it did a few decades ago.

Weeks-long training camps held at high altitude are now the norm, and riders spend less time racing than they did in previous generations. This model helps Tour riders like Primož Roglič and Tadej Pogačar achieve their optimal fitness. Previously, riders used to starve themselves in order to hit race weight. Now, nutritional strategies follow a “more-is-more” mindset. The fear of peaking too soon—achieving top fitness prior to the race—is a thing of the past.

“We are very very happy with their shape and how their form is at the moment,” team performance director Mathieu Heijboer told VeloNews after the Critérium du Dauphiné.

They achieved this winning form after following a training regimen that bucked the trend of cycling’s traditional preparation philosophies, Heijboer said.

“As you could see at the Daupiné, Primož, Wout and Jonas are very good. And those guys are feeling recovered already. The program and training we scheduled definitely seem to be paying off, and going on track,” he said.

Jumbo-Visma’s Tour de France route map reveals a lot about how the road to the world’s biggest race evolved over recent decades. Here’s why:

Some fundamentals of modern-day training plans haven’t changed from the old ways, and never will.

“One of the key aspects of winning the Tour de France is having a good and consistent training block over a very long period, months,” Heijboer said. “That’s the foundation, the most important part.”

Riders complete consistent training blocks in which they ride 30 hours a week—or more—during the early months of the season. Riders complete multiple rounds of these blocks before taking in a one-week rest prior to early races.

Roglič and Pogačar don’t publish much of their data. But Jumbo-Visma’s American rider Sepp Kuss does. Kuss completed weekly blocks that ramp from 15 to 25 hours before a race in a template that’s become a no-brainer over dozens of years.

But what is very different from years ago is the priority of training over actual racing.

Not so long ago, Tour contenders would compete in multiple stage races and one-day events through the spring and early summer to hone their fitness. Now, many Tour riders like Kuss, Roglič, and Pogačar skip the constant racing and instead go off-grid for weeks in high-altitude training camps.

At these camps, their workouts are prescribed with laser precision to replicate racing efforts to the watt.

“We all do different efforts when we’re on camp,” Kuss told VeloNews after he returned from Sierra Nevada, Spain, in June.

“We have different guys with different goals and different roles, so training is pretty varied between riders. There’s some pretty specific intervals for all of us.”

Dodging elbows and potholes in a race is dangerous. In previous years, Tour riders have crashed early and been sidelined by injuries. Today, some riders avoid those dangers as much as possible.

Roglič, Pogačar, and other GC racers are similarly selective about when they race.

“We always incorporate enough time to train, especially for the GC riders. On the other hand, it’s also important to be racing, to get the feeling of the peloton and the need to be competitive,” Heijboer said.

“But we always keep in mind there’s enough time to train for a rider like Primož, that’s almost priority. And that’s why his race program is quite limited when you compare it to riders a decade ago,” he added.

Roglič completed 26 race days prior to the Tour. Pogačar was at 24. Those numbers would have been bigger not so long ago. Prior to the 2010 Tour de France, Alberto Contador of Spain raced 37 days.

“Being able to train consistently is key as a GC guy,” Heijboer said. “It means we can get them to a high level and able to recover from the training. Then they can improve from racing at certain points instead of losing form from racing too much.”

It’s not just about accumulation and consistency on the training bike. It’s also amassing about time at thin air.

Prior to the Tour, Jumbo-Visma’s Tour team hunkered down in the French ski resort town of Tignes, which is at 5,938 feet above sea level, for their third high-altitude training camp of the year.

“The timing of altitude is an important part of the program but also the accumulation of altitude,” Heijboer said.

“We send riders likely to do the Tour de France to altitude in February not only to prepare the spring races, it’s also to build some altitude into the beginning of the season. Then they accumulate more and more time at altitude during the year. It’s about building the adaption.”

Jumbo-Visma’s Tour crew then traveled from the French ski resort to the race’s opening stages in Copenhagen just days before the race. The late arrival, Heijboer said, helped them overcome the hungover feeling that some riders suffer when returning to sea level from the mountains.

“There are some riders who we know of that have some bad days after altitude. But since we have now so much experience with all the riders because they have been to altitude so many times, we know well when they might have a bad day and if they have a bad day at all,” Heijboer said.

“The altitude window is a good excuse they use when they have shit legs I think. We see most riders being very strong straight after altitude [without sea-level adaption time],” he added.

And the thorny issue of race weight—the era of going to bed hungry in order to shed pounds is no longer a thing.

Power is the kingmaker of the watts-per-kilogram equation—a formula that determines a rider’s overall speed—and today, racers eat more food than they did a decade ago, but under the watchful eye of nutritionists.

“Towards the Tour de France, we are trying to reach an optimal race weight. But most important is optimal nutrition and hydration in training so that the effect of training is maximized, and so the recovery after training is maximized. That lets riders train and race consistently,” Heijboer said. “Of course race weight is important and we are focused on that. But we prioritize the right nutrition at the right time so they can be best.”

Also read: Feeding a day in hell: What riders eat to conquer the cobbles of Paris-Roubaix

Fed riders are healthy riders, Heijboer said. An extra 500 grams can make the difference between the Paris podium, and illness and overuse injuries.

“Being 100 percent focused on losing weight is a big threat for mental well-being. And if that’s harmed, you certainly don’t have a good rider and performance,” Heijboer added. “That’s always in our mind.”

Are Jumbo-Visma officials worried that Roglič, Vingegaard, and Van Aert are getting too fast too soon?

Four-time Tour winner Chris Froome famously started the 2018 Giro d’Italia out of shape and overweight. Team Sky profiled the stages and mapped out Froome’s wattage output to see weight loss and performance gains through a three-week period that took Froome to the pink jersey.

So, should riders go into the Tour still searching for form? Screw that, says Heijboer.

“I don’t believe that you can be too good too early. I think peaking and growing to a shape is also a mental thing. And although we raced to win in the Dauphiné, we always kept the Tour in mind. So we still know there’s a bigger goal ahead of us,” he said.

“I’m sure that Jonas and also the other guys can at least maintain but probably improve their level.”

Heijboer’s hypothesis will be put to the test as the Tour de France enters the Alps this coming week.

The Future Could Be Bleak. Plant the Tree and Have the...