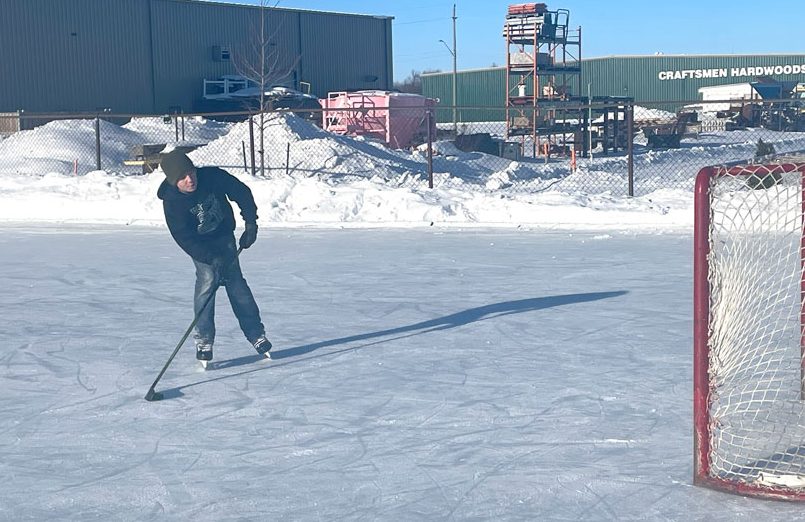 DRAYTON – Mapleton City Council on July 12 discussed the future of the outdoor hockey rink on the grounds of the PMD Arena.

Councilman Michael Martin raised the issue, noting that the ice rink was created in the early days of the COVID-19 pandemic to provide people with an outdoor recreation opportunity.

“It seems to have changed, you know, now the lights are on, more investment in the rink… I’m sure in the near future a concrete slab or something will come or be suggested,” Martin said.

“Do we want further investment in an outdoor ice rink?”

Martin suggested opening the arena’s ice surface for off-peak free skating might be an alternative.

“If we’re paying people to wait it out, I’m just wondering if we should be discussing it…if that’s something that’s in our long-term plans for an outdoor ice rink going forward?” he asked.

“I know it’s put to good use sometimes, there are members of the public who certainly enjoy it. But maybe they have the same pleasure in the ice rink when it’s not in use?”

“Are you worried that the cost of this rink is getting out of hand?” asked Mayor Gregg Davidson.

Martin replied, “I don’t think we’ve ever really had the full cost of what this outdoor rink is costing the community.

“If we have an ice rink 100 feet away, it doesn’t always get used…if we continue to put additional resources and money into an outdoor ice rink, I’m just wondering if it wouldn’t be a conversation? ”

Sam Mattina, director of public works, said the rink cost about $6,000 to set up.

“It’s a one-time cost because the materials are there… We’ve got some costs for the lighting now, but pretty well for the future, we’re just going to make the ice and just keep it usable. But all structural costs are included,” he explained.

“The staff is already in place in the arena… There are no additional staffing costs for the outdoor rink.”

Mattina added: “We have ancillary costs for snow removal that are on top of the normal costs.

“But I’d say if you weigh that against the rink’s popularity, they’re minimal.”

Davidson noted that the outdoor ice rink is available when other events are taking place on the indoor ice rink.

“The outdoor ice rink is always available,” he stressed.

Councilor Marlene Ottens said: “I think a community the size of Drayton warrants an outdoor ice rink when Moorefield and Alma can have one for their much smaller population.

“I think now that more of the COVID restrictions are gone next winter the indoor space will likely be booked even more. That gives the people who are not on the indoor ice the opportunity to skate.”

Ottens also noted, “Lighting seems like a good idea because it gets dark so early in the winter.”

Martin pointed out that the difference between outdoor rinks in Drayton, Alma and Moorefield is that volunteers from local service clubs operate the latter two.

“We pay for that in Drayton, right? Regardless of whether people are getting paid or not anyway, the allocation should go to that amount of money to maintain the rink,” he said.

Ottens suggested the community might consider asking a Drayton Service Club to help maintain the facility in that community.

“I think we have to be careful how much money we’re spending on this right now because of what’s coming up,” Councilman Dennis Craven said.

“And we also ask people to pay for it [a new] Water tower and increase in water rates. So we have to be a bit careful about how much we ask for money from people.”

Davidson emphasized, “It doesn’t look like there will be any other future costs. The lights are already in place and the gravel is in place and it’s just a matter of reducing or removing the snow sometimes when we get a heavy snowfall.”

He added, “I don’t think we should be making concrete slabs and planks and getting any further than we are right now… My suggestion would be to continue with what we have.”

Davidson asked if some planning and organized activities for the outdoor ice rink should be considered to avoid conflicts between users — for example, people wanting to play hockey on it while others skate.

Recreation manager Amy Grose said the community “might consider spending a few fun days and having some activities and events out there.

“But having something that’s constantly competing with what’s happening with the ice rink might not work that well.”