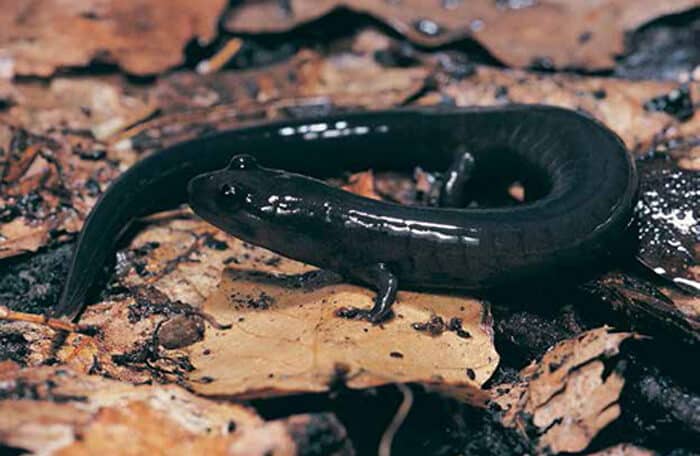 The Red Hills salamander lives most of its life in its burrow, venturing out at night to feed on small insects. Photo by Eric Soehren

From the Alabama Department of Conservation and Natural Resources

Photo above: Photo of a Red Hills salamander outside its den by Dan Brothers

The US Fish and Wildlife Service (USFWS) recently awarded a nearly $2.57 million land conservation grant to the Wildlife and Freshwater Fisheries Division (WFF) of the Alabama Department of Conservation and Natural Resources (ADCNR), which is eligible under Section 6 of the Endangered Species Act to purchase 1,728 acres of critical habitat for Red Hills Salamanders (RHS) in Monroe County, Alabama. The Forever Wild Land Trust voted to provide the remaining financing for the acquisition at its November 3, 2022 meeting.

“With the creation and expansion of the Red Hills Wildlife Management Area, our goal was to work towards the possible elimination of the threatened Red Hills salamander and to provide additional outdoor recreation opportunities for Alabamaans,” said Chris Blankenship, ADCNR Commissioner and Chair of the Board of Trustees of the Forever Wild Land Trust. “This WMA is a great example of how to provide sanctuary for endangered species while expanding access to outdoor recreation. We are grateful for the partnerships that helped make this project possible.”

One of the largest lungless salamanders in the world, the RHS can grow up to 10 inches in length. Its translucent purple skin makes the RHS a strikingly beautiful animal, but you’re unlikely to catch a glimpse of this creature. It spends most of its time in an underground burrow, only venturing out at night to ambush small prey such as crickets, spiders, and earthworms.

The known range of the RHS consists of a small strip of land in the Red Hills region of Alabama. It cannot be found anywhere else in the world.

Listed federally as a threatened species since 1977, habitat fragmentation has long been a factor that continues to threaten the future of the species. In addition to the Flat Creek Phase V tract, ADCNR is in the process of closing an additional 760 acres (Flat Creek Phase IV tract) that will be added to the WMA. When the acquisitions are complete, the Red Hills WMA will provide 13,551 acres of contiguous living space for the RHS and access to outdoor recreation.

Many other endangered animals may be present or could be reintroduced at the Red Hills WMA. These species include the Bachman’s sparrow, wormeater, endangered red-cocked woodpecker, gopher tortoise, southern hognose snake, coral snake, eastern fox squirrel, as well as many aquatic species that may be found in headwaters on or near WMA.

For an up-to-date map of the Red Hills WMA, visit www.outdooralabama.com/hunting/wildlife-management-areas.

High 10 Out of doors Adventures In The U.S. This Fall

The Amie L. Mathy Middle for Recreation and Training at Viterbo...